Rory: The Best PGA Championship Ever? 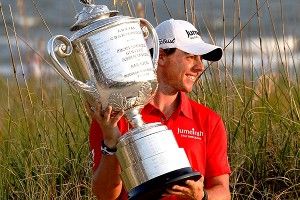 Last June, Rory McIlroy’s stunning U.S. Open victory led us to create a new methodology for measuring performance in golf, applying the Z-Score (or Standard Score) from math to fields of players in a golf tournament. This new methodology produces a more accurate measure of performance by comparing a player’s four-round performance to that of every other golfer’s in the context of that particular tournament, as opposed to the more traditional constructs of par or by merely comparing the winner to the second-place finisher. It’s also an analysis that inherently adjusts for the weather conditions faced by the players on their four days at the course, and it produces a score that can be translated across different courses and eras to see how one player’s score matches up against another’s. It’s not perfect, but it’s a significant step forward in gaining a truer sense how a golfer played.

So, McIlroy. Last year, his 268 at the U.S. Open produced a Z-score of -3.07, meaning that his performance was 3.07 standard deviations below the average score of a player who finished all four rounds. (Below, of course, because a lower score in golf means a superior one.) He won the tournament by eight strokes, but he beat the average finisher by more than 18 strokes. It was his best performance on the PGA Tour, the 17th-best performance in a major since 1960, and the second-best performance in a U.S. Open of all-time, trailing Tiger Woods’s magical run in 2000 at Pebble Beach. To top Tiger’s level of dominance from 2000, McIlroy would have had to slice seven more strokes off his total. That’s how good Woods’s performance — the best in major history and the-second best in golf history, behind Johnny Miller’s 1975 Phoenix Open — was in 2000.

That brings us to this weekend, when McIlroy overwhelmed the competition at Kiawah Island and claimed his first PGA Championship. McIlroy won again by eight strokes, breaking Jack Nicklaus’s 1980 record for the largest margin of victory in PGA Championship history. It’s no surprise, then, that McIlroy’s performance rates out as impressive in terms of Z-Score. Was it better than his U.S. Open performance, though?

As it turns out, it was. McIlroy’s score of 275, weighed against the rest of the field, produced a Z-score of -3.15. He finished just under 15 strokes ahead of the average golfer who finished four rounds, and while he won by eight strokes, there were two dozen players within four shots of second. By a fraction of a stroke, it narrowly topped McIlroy’s U.S. Open performance from last year to become the best performance of McIlroy’s career.

Was it the best PGA Championship performance of the modern era? Nope. In fact, while McIlroy’s performance topped Nicklaus’s record, Nicklaus’s run in 1980 represents one of the two scores that topped what Rory did this weekend. The best performance at a PGA Championship since 1960 belongs to Davis Love III, who was transcendent at Winged Foot in winning the 1997 championship. Love “only” won by five strokes, but consider that his 11-under-par mark made him one of just five players in the entire tournament to finish at par or better. A look at the numbers:

To produce a score that topped Love’s, McIlroy would have needed to chop three strokes off of his score and shoot a 272, which would have resulted in a Z-score of -3.60. That gives the world’s best golfer some homework to do for the next 25 years of his career.

Filed Under: Golf and Stuff

See all Golf and Stuff

Nobody Told Kevin Love There Would Be Dancing