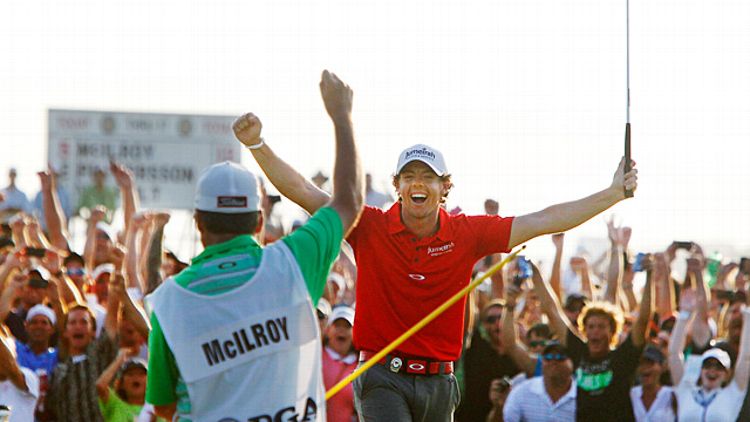 Well, if Rory McIlroy was going to end up winning this PGA Championship by tying his eight-shot margin of victory from the 2010 U.S. Open and breaking the PGA Championship margin-of-victory record by one stroke, couldn’t he have said something earlier? Because all of the ink spilled over Tiger Woods’s likely return to major glory has proven itself to be utter waste once again, as has been the case for each of the final three majors of the year.

But first, let’s add a bit more to the waste pile. Woods was finished after his seven-plus holes of constant bogies when Saturday’s third round was cut short by the South Carolina lowlands’ death clouds. When third-round play resumed Sunday, he was able to get a couple of those strokes back, but not enough to save him from having to assume that aggressive comeback style of play that’s never worked in majors — not now or for Golden Age Special Tiger.

He shot a pair of sixes on the two back-nine par fives, but only because he was a half a dozen or so shots back. If he’d been within, say, three shots of the lead, he wouldn’t have been bothering to attempt a 3-wood from 290 yards away to a teensy green surrounded by what appeared to be construction-site refuse from new beachside real estate developments.

The truth, cutting and searing as it works its way against the overnight narrative, is that Tiger Woods’s game is in great shape now, and — *gulp* —we have little doubt he’ll win a major next year. (Or maybe the year after that.) Tiger Woods is still good at golf, OK?

But you know who else’s game is in great shape right now? Rory McIlroy, what with the PGA Championship victory he secured today by eight strokes.

Who could have known? The man who’d been christened by pretty much everyone, accurately, as the most talented new player of his generation was capable of winning a major after his “drought” of one year. He’d missed some cuts or been otherwise noncompetitive over the last few months, after all. Was this a fall from grace on par with that of David Duval?

Some thought that perhaps his relationship with tennis star Caroline Wozniacki had been “distracting him from his game.” Uh, yes, he has a girlfriend? This always appeared oddly like a way for commentators to tie rising stars from the two country club sports into the same story, instead of simply suggesting that Rory McIlroy’s career was susceptible to ups and downs.

The great news about all of this is that Woods and McIlroy are now Nos. 1 and 2 in the FedEx Cup standings with the playoffs set to begin shortly. It’s always been fashionable to say, “The FedEx Cup is so lame, why does it exist? I don’t even care, that’s how lame it is.” I always feel so much less cool than these people when I’m watching the FedEx Cup playoffs and enjoying them. But maybe having an actual Rory-Tiger rivalry play out, when they’re so close to each other, will do the trick for everyone?

Nobody Told Kevin Love There Would Be Dancing