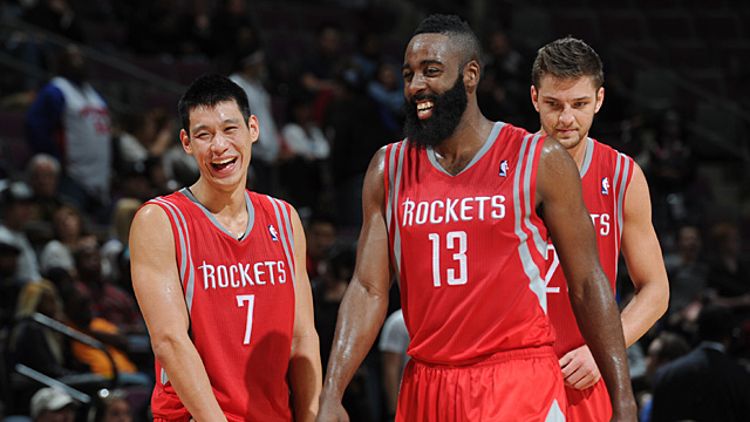 Just days after transitioning from Oklahoma City’s sixth man to the focal point of a young Houston roster, James Harden put on quite the show in his first game as a Rocket. In his first test as a leading man, against the Pistons last night, Harden looked the part, notching 37 points and 12 assists while shooting 14-for-25 from the field.

Here’s a breakdown of what Harden, his teammates, and his coach did to create such a spellbinding performance, along with some words of caution to bring us all back down to earth a little.

• Perhaps the best place to start is how head coach Kevin McHale’s spread pick-and-roll system seems tailor-made for Harden. That spread alignment — which calls for three players to stretch the floor to the perimeter during a pick-and-roll — is something in which Harden rarely had the opportunity to play with his old squad. Of OKC’s most-used lineups from last season, none featured a frontcourt with the ability to space the floor to the 3-point line. Rockets starting power forward Marcus Morris struggled last night, but he was able to draw the big assigned to him all the way out to the perimeter. That’s something Serge Ibaka, Kendrick Perkins, and Nick Collison never could do.

• One huge positive was the great rapport Harden showed with fellow offseason acquisition Omer Asik. The Turkish big man has the frame and physical nature to be one of the best screeners in the league — a drastically underrated skill. Asik also built on his excellent preseason by showing he’s not just capable of freeing Harden to attack the rim, but also of catching and finishing on the roll himself. If last night was any indication, the Harden-Asik duo might establish themselves as one of the best pick-and-roll duos in the league by season’s end.

• Jeremy Lin’s fit alongside Harden in Houston’s new-look backcourt is perhaps the most interesting development to monitor going forward. The pairing gives the team two guards capable of attacking the basket and drawing fouls on opposing defenses. Last night, Harden had several penetration kickouts that allowed Lin to attack a closing defender and create easy offense. As long as Harden is controlling the majority of possessions, this will be a very common occurrence for Lin (as well as the Houston’s wings).

It remains to be seen whether that relationship is reciprocal, as Lin still tends to zero in on finding just his own offense when running pick-and-rolls. If he starts to dominate possessions — like Russell Westbrook in OKC — Harden’s ability to impact the game will definitely suffer. Should this or Lin’s shooting struggles make this pairing prove problematic down the line, it could force McHale to consider moving Lin to the bench.

• Harden will have to adjust to being the primary focus of opposing scouting reports. Though starting Jason Maxiell in their frontcourt nearly ensures they won’t find defensive success, the Pistons employed a lot of pick-and-roll coverages that may prove problematic for Harden when executed by teams with better personnel later on this season. In particular, he dealt with more of his side pick-and-rolls being “downed” — a maneuver that calls for the on-ball defender to quickly jump to Harden’s top shoulder and force him away from the middle of the court toward the baseline.

In OKC, Harden rarely had side pick-and-rolls defended that way because he would often receive them as a secondary action (meaning one of his teammates has already shifted the defense by coming off a screen, dribble-penetrating, or running his own pick-and-roll). Due to rotating from a help position, opposing big men would then have no choice but to “zone” — sag back protecting the paint — as Harden came off the screen with a full head of steam.

Now that he is the primary play-maker in Houston, Harden will be running a lot of first-action side pick-and-rolls that occur when the defense is set. That means opposing coaches can be much more selective with the coverage they choose. Detroit head coach Lawrence Frank used a variety of coverages last night — from “downing” to a hard hedge — before even mixing in some aggressive double teams.

• Trapping Harden in OKC never happened because it meant the ball would be taken out of his hands and put into those of another elite talent like Westbrook or Kevin Durant. With Houston’s far less intimidating personnel, opponents will be more inclined to execute schemes that force Harden to give up the ball to the likes of Parsons or Morris.

• Simply learning to trust his teammates to make plays out of those situations — even if they have a constant string of failures — is one of the many small things Harden will have to address. So despite a positive first step, Houston fans should realize there will still be plenty of growing pains to go along with some unsightly losses as Harden learns to function in the opponent’s spotlight.