Road Burn: The Heat Get Clipped 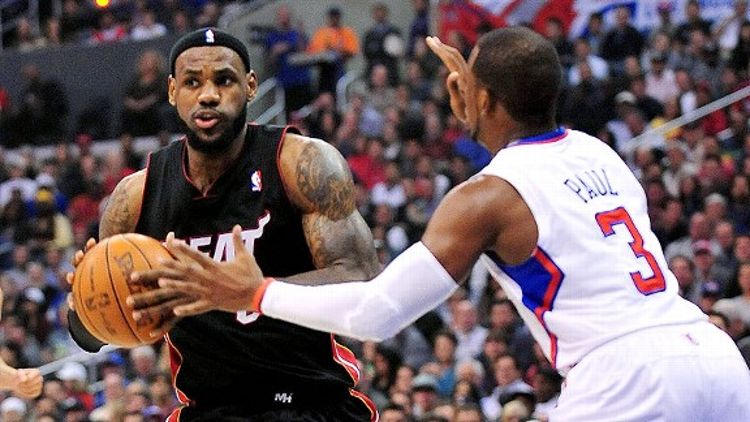 Tucked into a corner of one of the NBA’s notoriously small visitors’ locker rooms, LeBron James and Dwyane Wade sat side by side, their feet submerged in ice-filled plastic tubs, smiles on their faces. For the second straight night, the Heat had lost in overtime — this time to a Clippers team that used Wednesday’s game as a chance to announce its own arrival — but as James started to field questions, there was a strange sense of satisfaction.

“Tonight, when you play that game, possession after possession, we played Miami Heat basketball — we defended and we gave ourselves a chance to win,” James said. “We don’t like to lose, but we’re not going to hang our heads about this one. “

James’ easy acceptance (and Wade’s: “You never want to lose in the game of basketball, but no team goes undefeated”) could conveniently be attributed to the realities of the 2011-12 season. The Heat left for Atlanta last week to begin a nine-day, five-game road trip that wraps up in Denver on Friday night. The compressed schedule has these sorts of pitfalls. Miami will only have one longer road trip all year, and a road back-to-back against a team eager to prove itself represents the type of loss built in before the season begins.

The concern is not whether Miami lost, but how. The Clippers had a game of their own the night prior — a trip to Portland to play a team that looks to be among the West’s best — and at times, it was evident. After riding a spectacular third quarter from Chris Paul (11 points, 5 assists) to a 70-69 lead, the Los Angeles offense returned to its stagnant form throughout the fourth. The Clippers shot 5-of-17 from the field as Chauncey Billups continued to be a ball-stopping, flow-murdering force on the offensive end and any play not orchestrated by Paul ended with an empty possession. In other words, this wasn’t a case of a tired road team that got jumped on early. Miami had a chance to win at the end, and that it didn’t means a return to the conversation that has dominated the NBA since LeBron’s disappearing act in Boston two seasons ago.

Of everyone in and outside the Heat locker room after the game, it was coach Erik Spoelstra who allowed a bit of frustration to show. Just minutes after being ejected and escorted from the court, Spoelstra bristled when asked about James’ aggressiveness at the end of games.

“Come on,” Spoelstra said. “Let’s not forget who this guy is. He’s a two-time MVP, and he’s done enough to prove himself with what he’s done late in games.”

The previous night at Golden State had been a return to the passive tendencies that James had been criticized for during last year’s Finals. James didn’t attempt a single field goal in the fourth as the Warriors erased a 12-point deficit at the start of the quarter to force overtime. Aggressiveness wasn’t the issue Wednesday. If anything, it seemed as if James might have been pressing too hard.

“I felt good,” James said. “I was able to get back to attacking again, when I found mismatches or whatever the case may be. My teammates trusted me, especially down the stretch, and I was able to get fouls to give us a chance to win the game.”

A chance he once again failed to take advantage of. After missing the second of two free throws with the Heat down one, Miami retained the ball off the rebound, and LeBron returned to the line, where this time he missed the first half of the pair. A lack of effort was replaced by a lack of focus, and though the symptoms were different, the ailment was the same — given every opportunity, the Heat failed to put a good team away when it mattered.

Miami is still 8-3. Following the game in Denver on Friday, it gets three days off before playing eight of its next nine games at home. When the Heat go 8-1 or 9-0 in that stretch, a few missed free throws on a back-to-back will probably cease to matter. But the question still remains about how glaring of a problem these types of games are for Miami and, specifically, its best player. Because as Spoelstra reminded us, “Come on, let’s not forget who this guy is.”

The Ugly Winners: Michigan Survives Northwestern and Itself