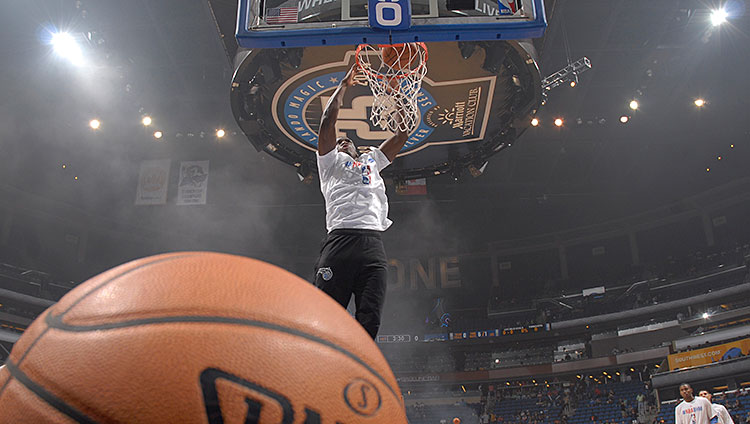 The only change Nick Young has made to his pregame routine in the seven seasons he’s been in the NBA is which teammate he has paired up with. Over the years, he has worked out with Dominic McGuire in Washington, Damien Wilkins in Philadelphia, and now Jordan Farmar with the Lakers.

NBA players, more often than not, are creatures of habit. Even ones as seemingly eccentric as Swaggy P. Once they have a routine, they stick to it. After the Lakers’ late January loss to the New York Knicks, I asked Young about his pregame process. Young said, “If I hear a certain song and I go out there and have 30 or something, I’ll play that whole song [next game].” When I asked what the last song that happened with was, he was defiant. “I can’t tell you that, man! I can’t give you all that.”

The secret pregame rituals, habits, quirks, and hang-ups of NBA players has always fascinated me. Which players go hardest in warm-ups? Who takes it easy? How are the routines crafted? Who warms up with a partner? Does anybody work on defense?

Spend enough time watching players warm up and you start to develop favorites. Watching warm-ups closely is how I learned Robin Lopez likes to work with resistance bands before he starts shooting (“It’s something that’s kind of proliferated through the league. I’m just trying to fire up the core,” he said); how Nick Collison practices slipping his picks and receiving pocket passes on pick-and-rolls; how Wes Matthews gets things started by taking one-dribble jumpers rather than the usual catch-and-shoots.

You can also find some least-favorites. I noticed that DeMarcus Cousins kicks off his routine by taking one-handed shots from a few spots inside the paint; J.R. Smith always ends his session by taking underhanded half-court shots until one goes in; Raymond Felton takes more long, pull-up 2s than every other shot combined.

Paying close attention to warm-ups is how I noticed little idiosyncrasies. Dirk Nowitzki likes getting down as low to the floor as possible and taking a quick power dribble before exploding upward to rise and fire his jumper. “I’ve been doing that for basically since I met my coach, which was almost 20 years ago,” Nowitzki said. “It’s just getting the legs ready, getting the legs into the shot.”

It’s also how I came to appreciate the work ethic of Isaiah Thomas, who says he modeled his routine after Ray Allen. “When we played the Heat and I see Ray Allen there three hours before the game, from that day forward I told the coaches, ‘I want to be like him. I want to be there. I want to be the first guy on the floor at either home games or away games.’ My mind-set was like, if he’s doing it in his 17th, 16th year, why wouldn’t I do it?” 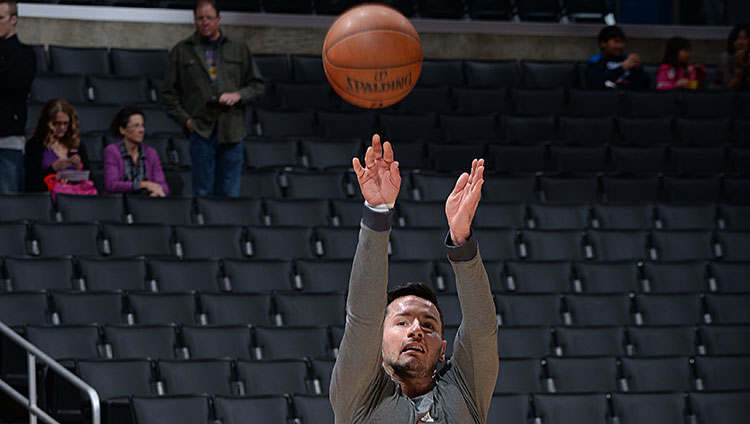 Another player who seems to model his warm-up on Allen is J.J. Redick. When the Los Angeles Clippers came to Madison Square Garden to play the Knicks earlier this season, I made it a point to watch the entirety of Redick’s warm-up. He would spot up from multiple areas inside and outside the 3-point line, curl off mock pin-down screens for quick catch-and-shoots, mix in some free throws, take a bunch of pull-ups off angled side screens, and loft a few floaters over invisible defenders.

Almost every player I’ve watched practiced shots from his preferred spots on the floor. Only one actually ran through the full sets his team would use during play — Indiana’s George Hill.

The Pacers have a pet play where Hill (or Paul George or Lance Stephenson) passes the ball into the post, and then feigns a clear-out baseline cut before popping back out to the top of the key for an open 3. Before Indiana’s overtime win against the Knicks in November, I watched as Hill ran through this play multiple times with an assistant coach, each time throwing the entry pass, feigning the cut, and then popping out. He’d go right or left based on the coach’s direction.

“I’ve been doing that since I was in San Antonio,” Hill said of working on actual sets, as opposed to just shots from certain floor locations. “When you’re out there shooting, it’s no good to shoot shots that don’t have any meaning. You shoot the shots that you’re going to get in the game. Doing all type of different looks, letting Coach mix it up, he calls it and I just react to it, it helps.”

Hill scored 23 points in that game against the Knicks, a total he’s surpassed only twice this season. He also made four 3s, one of which came off that same flare screen play.

A month or so later, I was sitting on the scorer’s table watching Serge Ibaka warm up.

I’ve never seen another player with a routine like Ibaka’s. As he started working, I noticed that he was doing everything in super slow motion. He’d catch the ball in the post, wait a beat, slowly turn to face the hoop, take a very measured power dribble, give a deliberate up-fake, slowly step through, and then put up a layup. Then he’d amble up toward the top of the key to set a screen, leisurely roll to the free throw line at what looked like about one-third speed, catch the ball from an assistant coach, give another deliberate pump fake, take a relaxed dribble toward the basket, and put up a hook shot.

Ibaka then went through the routine again, this time at about half-speed. And when he finished that, he did it again at something approaching full speed. Some drills he did twice, others three times, but everything was done at varying tempos. Asked about it after the game, Ibaka simply said, “It helps me to get a rhythm.”

Rhythm is a big buzzword when you get players talking about their warm-ups.

Why does Jarrett Jack spend five minutes on the sideline practicing dribbling the ball around his back, between his legs, back and forth, forward and sideways, before he gets into his shooting? “I just try to go out there and get a rhythm. Obviously with me, playing point guard position, handling the ball is very vital.”

What does Lopez say is the main goal of his pregame workout? “Rhythm. Trying to familiarize myself with the spots I know I’m going to handle the ball out on the floor.”

Why does Jose Calderon start his routine with spot-ups before working his way into pin-downs and then pick-and-rolls? “I think when you try to warm up, you try to go with the spot-up at the beginning just to get a rhythm going on.”

With this emphasis on timing and rhythm, you’d think players would be allowed to specifically craft their own routine. That’s not always the case. Rookies often don’t really get a say in what they work on before games. Nearly every player I spoke with had his warm-up designed for him by his coaches as a rookie.

Calderon: “At the beginning when you’re a rookie, you have to work on whatever they tell you to.”

Matthews: “It was whatever Jeff Hornacek and those guys out [in Utah] wanted me to do.”

One thing most rookies have in common is that they tend to not get very many minutes. Of the 460 players who have played at least 500 minutes in their rookie season since 2000, nearly 60 percent of them averaged less than 20 minutes per game. And when you’re not playing very much, warm-ups tend to take on a different tone.

Mavericks rookie Shane Larkin, who was the best player on his University of Miami squad last season, is now a little-used backup point guard. “I’m just not playing as much as I did in college so I go a lot harder in workouts,” Larkin said. “I go out there and get a real heavy sweat in just to get my legs warm. When I come in [the locker room] I try to keep them warm. Stretch. Try the foam roll. Heat packs. All that trying to stay warm because I’m coming off the bench.”

While Larkin bides his time, Thomas has seen his minute load gradually increase. “When I first came in the league and I wasn’t playing, I would run the stairs,” Thomas said. “When I started playing a little bit more, I couldn’t do that because it would make me tired. Now that I’m playing a lot more minutes, the amount of shots that I get before the game has went down just so I can stay up all game.”

How hard a player pushes himself in pregame may change as a function of his minutes, but more often than not, the substance of the routine stays the same. Of the players I spoke with, only two (Kendall Marshall and Dion Waiters) said they made nontrivial changes to their routine before the game. Waiters adjusted his eating habits (he got a personal chef and a set pregame eating time this season after “winging it” as a rookie), not the composition of his on-court workout.

Calderon and Jack, who have each been in the league for nine years, both said they haven’t changed their routine since entering the NBA. Damian Lillard, who’s in his second season, has followed almost the exact same routine going back to his days at Weber State. (“On the court, I do the same thing every game, all the time.”) 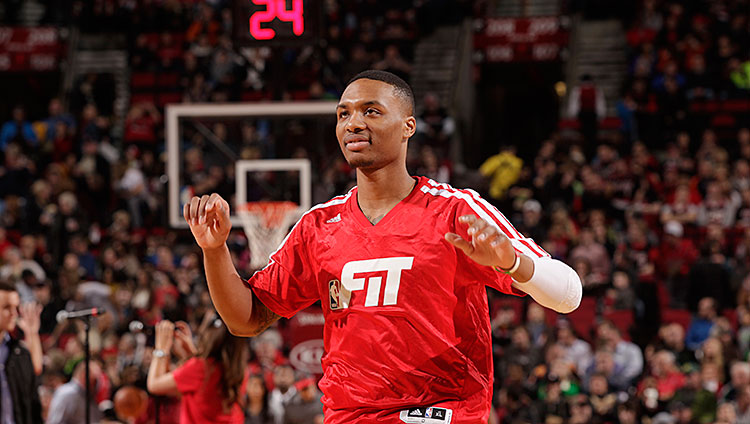 Most of the players I spoke with were adamant that game-to-game changes to a routine, based on team or individual performance, was not a good idea. Thomas said, “No, no. I’ve learned that [over the years]. Especially with me, don’t think too hard on the situation, whether you’re missing shots, whether you’re not doing something well, because you’ve just got to figure it out as a pro.”

Through months of watching warm-ups and talking to players about their routines, I noticed there’s no real correlation between whether I enjoyed watching a player’s warm-up and whether I enjoy his actual game.

I love watching Cousins play, but he had one of my least favorite warm-up routines of any player. I don’t much like watching Derek Fisher, but I found myself transfixed while watching him get ready. As a Knicks fan, I was already annoyed by Smith’s and Felton’s games, and getting up-close-and-personal looks at their warm-ups just reinforced that for me. I already loved me some Redick, and watching his routine gave me an all-new appreciation of his game.

The aesthetics and the particulars aren’t what really matter here. It’s the rhythm that counts.