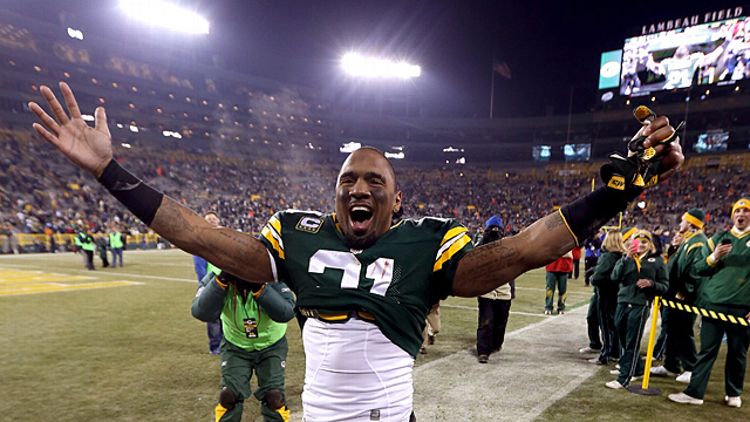 When the rumor was circulating on Friday morning that the Packers were going to release Charles Woodson, I got more than one text message with the same question: “HOFer?” What makes Woodson’s time in Green Bay so notable isn’t my answer to that question — it’s how emphatically I gave it. I have no doubt that Woodson will give a speech in Canton one day, but the certainty in that assessment tends to make me forget about the uncertainty that came with Woodson signing in Green Bay.

Most of Woodson’s career is already over, and with that perspective, it’s become easy — for me, at least — to distort it. Woodson was one of the best college players ever, went to Oakland and had a productive but unspectacular run, rode his name to remain a coveted player when he hit the open market in 2006, and finally found an ideal situation in Green Bay that turned him into one of history’s best.

The first two parts of that timeline hold true. Woodson’s national championship season at Michigan remains the best college season I can remember, and partly as a result, even with four Pro Bowl trips in eight seasons, his time in Oakland is generally considered a disappointment. What his run in Green Bay has distorted is just how much of a disappointment the end of his Raiders’ tenure was. He was franchised in his last two seasons and finished each on the IR. When he came up for free agency after the 2005 season, the Raiders let him walk.

Woodson is typically named alongside Reggie White as the two best free agents ever signed by the Packers, the two players who chose to forego bright lights and come to Wisconsin. In terms of how their Packer careers turned out, this comparison is apt. In terms of how those careers started, it couldn’t be further from the truth. White was arguably the best defensive end in football when he signed in 1993 — already an all-time great who was at or near the peak of his football powers. Woodson had two suitors in the winter of 2006. Two. There were the Buccaneers, who planned on moving him to safety full-time (a whole six seasons before the Packers did), and there was Green Bay. Woodson’s “choice” to play in Green Bay wasn’t much of a choice at all. “In terms of name value, Woodson is clearly the Packers’ most significant offseason addition,” Len Pasquarelli wrote. “Whether his game still lives up to Woodson’s name, however, is questionable, at least based on the last two seasons.”

Green Bay is a notoriously difficult place to lure free agents. The small town and the cold don’t help, but as Woodson noted to the New York Daily News the week of the NFC Championship Game in 2008, “Everything — organization, nightlife, the whole thing — you know, just being in Green Bay. The talk is always this is no place for a black man and that’s just how it was.” Woodson would go on to tell Ohm Youngmisuk in the same story that initially, he and Mike McCarthy had their issues, but by then, it was clear that Woodson had found his perfect situation.

In Oakland, Woodson was most considered a cover corner in the same mold of the elite players who’d come before him. His return skills and occasional offensive dalliances in college had drawn (warranted) Deion Sanders comparisons, and for the most part, that’s how his game was considered. By his fourth season in Green Bay, Woodson had transformed from a cover cornerback into one of the most unique defensive weapons in football. Woodson’s position designation was more for convenience than anything else. Dom Capers lined up his cornerback-safety-linebacker all around the formation and allowed him to wreak havoc in just about every way.

Woodson’s Defensive Player of the Year campaign in 2009 stretched the entire season, but its most notable stop came against Dallas in mid-November. After punching the ball away from Roy Williams in the open field, he added another forced fumble on a sack of Tony Romo, and then, just for laughs, picked Romo off in the red zone late in the Packers’ 17-7 win.

The result, of both that season and Woodson’s time in Green Bay, is a spot at a table where few thought he’d ever belong. Statistically, Woodson lines up with just about anybody. His 55 interceptions place him firmly among the best cornerbacks ever. Before Charles Tillman’s ridiculous 2012 season, no cornerback in league history had forced more fumbles. The numbers support it, but what Woodson will ultimately be remembered for is his constant impact on the game. His role in that Packers defense was unlike any a cornerback has had, and the result, from those who rooted against him, was a never-ending awareness of where he was and what he was doing. It’s easy to just accept that now as how it is, how it was always going to be, but as Woodson departs Green Bay, we should remember how close it was to never happening at all.