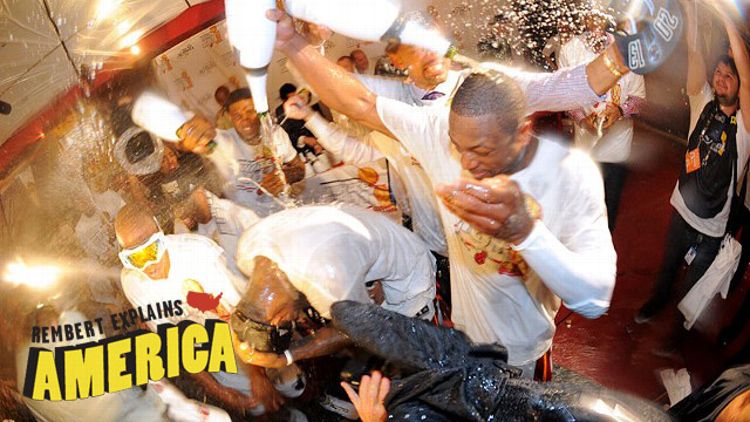 I didn’t know how, but Thursday night was supposed to be the most glamorous night of my life. In my head, this was the plan:

Dress self in all-white Miami Heat fan wear, fancier than casual. Acquire seats to Game 7 and cheer for this team that was not my own. Once the Heat pull out a victory, make way to the floor, acquire a championship snapback, and photobomb a few pictures. After this, sneak into the locker room, overhear conversation about the postgame club plans, and race to said club. After standing in line for 45 minutes alone, see a car pull up. It’s Mario Chalmers. Leave the line, stand closely behind Mario, and enter club in his wake. Spend the rest of the night with bottles, dancing on tables, ironically to Drake’s “Started From the Bottom,” and at 6 a.m., once Gabrielle has dragged Dwyane home and Savannah has dragged LeBron home, split a cab with Mario and finally get to my hotel room, smelling like a mixture of champagne and victory. And then, two hours later, wake up, confetti still in hair, and write about the previous night’s adventures as a snapshot of the atmosphere of conspicuous consumption that is the Miami nightlife.

I didn’t know how I’d pull it off, but I figured most of it would come true if I believed in myself.

Unfortunately, the plan was derailed before it even began.

For starters, I simply don’t own clothes fit for a night out “on the town” in Miami. I don’t have “shirts” that “sparkle.” None of my “jewelry” has “worth.” I’m not spiritually “capable” of tucking my “deep V” into my “boot cuts.” This wasn’t my town to blend in with the crowd, as made evident when I showed up to the arena in a top-buttoned polo like it was seventh-grade picture day.

And then, to keep the ball rolling, I had a pass into the arena, but no seat. Yes, I could wander the concession areas freely, and there was a very real allure to being able to hear the happenings and cheers and groans from the crowd without seeing any of the action unless you count all the televisions that had separate volume and gameplay delays, but for the most part that was less than ideal.

So, considering my pipe dream plan officially over, I began walking around the arena. For the first three quarters, I did 41 loops around the main level of the arena. Every now and then, I’d attempt to find a weak spot in the defense that was the aisle security guards, but after 20 or so loops, they began to realize my pitiful plan and wouldn’t even give me the pleasure of eye contact.

At the end of the third quarter, alcohol service was shut off. With this being the unofficial end of fans leaving their seats, and with that, the majority of my people-watching material, I made my way down to the floor level, the bowels of AmericanAirlines Arena. It was there that my night took yet another unexpected turn.

The piss-poor nature of the Miami Heat fans has been well-documented. And it’s especially easy to mock them, because they do everything in their power to bring on the criticism. Taking a step back, however, it’s not really “Miami Heat fans” we’re talking about. It’s “humans that acquired tickets through some form of equity or nepotism.” There’s nothing that explicitly implies that they’re fans. They’re simply the ones occupying the seats.

But they weren’t the only ones in the arena.

The easily forgotten. Through a Jacob Riis lens, the building’s “other half.” The workers of Miami’s AmericanAirlines Arena.

And after only a few moments in their presence in the tension-filled fourth quarter of Game 7 of the NBA Finals, it was clear, finally, I’d found the real Miami Heat fans.

This fact had been staring me in the face all evening, I just hadn’t realized it. When you see someone in a uniform cheering on a team, there’s an inclination to believe they’re doing it for show. Or because it’s simply “work.” But, looking back on it, the lady monitoring the elevator who wouldn’t take my question about the location of the stairwell until a TV timeout wasn’t behaving that way “for work.” Neither was the guy at the condiment stand quietly mumbling “let’s go Heat” alongside the crowd as he wiped up relish.

These were fans first, employees second.

Standing with a collection of security guards, food workers, custodians, and general arena staff around a small mounted television just feet from the court, we watched nervously as the game remained tight entering the final minutes. Every now and then, a few workers would see a supervisor walk by and pretend to be en route to their post, but as soon as they were out of sight, they’d return to the television and stress-watching their Heat.

And this stress only intensified as the game hit the three-minute mark, with their Heat only up by five.

“There go the trophy, bruh, right there. You know we ’bout to get that,” I heard from the other side of the room. I walked over and saw a group of men, movers, only minutes away from assembling a championship stage on center court, giddy over spotting the championship trophy. One guy claimed that he already saw it engraved with Miami’s name. Another swore he saw two trophies. Most, however, couldn’t have cared less about conversation and the soon-to-be constructed stage, because they were busy nervously watching the game on a small monitor.

After a Kawhi Leonard 3-pointer brought the margin to two, and thus ended all trophy conversations among the group, the Heat lead expanded again from four to five to six to seven with only 16 seconds left. At this point, the stage-builder supervisor called everyone to attention and I was shooed out of the way. I noticed the movers were visibly attentive to their instructions, but the smiles on their faces were unforgettable.

Walking back over to the group surrounding the television, preliminary celebrations had already begun. And within these guarded but excitable fits of emotion came the noticeable, powerful use of the possessive.

That trophy is ours.

There was no “them” about the Miami Heat. The separation did not exist. And just like LeBron, Dwyane, Shane, Christopher, and Erik, they, too, were only moments away from their second consecutive championship.

Workers screamed, hugged, ran through the tunnels banging pans, high-fiving anyone with an extended arm. I’m sure the scene in the stands was equally exuberant, but this scene felt different. Genuine and deserved. They didn’t need to be in the high-profile Game 7 crowd to prove their love of the Heat, because they did it behind the scenes every night.

Real Miami Heat fans do exist; you just have to do some digging. I would say we all owe them an apology for lumping them alongside the glitzy riffraff, but …

They’ve got two rings in two years, after all. They ain’t got no worries.