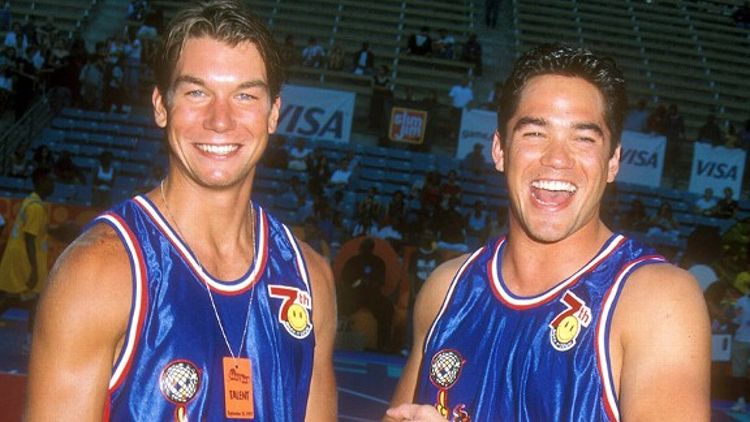 When the idea of writing about one of my favorite childhood TV programs, MTV’s Rock N’ Jock series, popped into my head, I assumed it would be something I could crank out in one caffeine-induced evening. Around 5 p.m. that day, I Googled “Rock N Jock Rosters,” expecting to be blessed with pages of Bill Bellamy and Dan Cortese-led softball and basketball rosters and video montages of every 25-point shot.

Unfortunately for me (and almost you, the reader), it was a lot harder than expected. Sure, there’s a YouTube video here and there, and a few random references to celebrities who played together, but for the most part, the ‘90s phenomenon that was athletes, musicians, television actors, and movie stars coming together in the celebration of casual sport was nonexistent online. This discouraged me, it saddened me, but when it comes to things of the mid-’90s variety, giving up is not an option.

Before my Hunt for Rock N’ Jock began, I assumed everyone between the ages of 20 and 40 loved the series as much as I did. But if you (1) didn’t have cable, (2) had cable, but weren’t allowed to watch MTV at as young of an age as I was (or weren’t a legendary pretend sleeper like I was), or (3) were born after 1987, you probably have no idea what I’m talking about. Coupling this with RN’J’s lackluster Internet presence, the divide between the “rocks” and the “rock nots” intensifies. My desire to write a slightly humorous, extremely nostalgic article about Rock N’ Jock quickly turned into a humanitarian project in which I sought to provide the Internet with material it sorely lacks, remind those of us privileged to experience it in real time how incredible it was, and enlighten those who weren’t privy to one of our greatest TV institutions.

Much like with my childhood hero, Ken Griffey Jr., the only years of Rock N’ Jock‘s tenure that really matter are 1990 to 1999. In this stretch, there were 10 softball games and seven basketball games, complete with epic rosters like this:

Nonexistent person X, I see your 2011 World Series first baseman matchup of Albert Pujols vs. Michael Young and raise you a 1990 Rock N’ Jock second baseman matchup of Bret Michaels vs. Tone Loc. Without hesitation. While it doesn’t get much weirder or more random than 1990, the star power definitely increased as the years went on.

.01 percent of America remembers why there’s an asterisk by Bobby Bonilla’s name. (If you’re in that group, find me immediately. We must start a support group.) It’s because in the middle of the game, due to his apparent underperformance, he was involved in a dramatic trade from the Homeboys to the Awayboys. (Go to 2:48 RIGHT NOW.)

Yes, Bobby Bonilla, six-time MLB All-Star, was completely OK with Dan Cortese, the always bandanna-clad host of MTV Sports, trading him to the other team for Salt & Pepa, for underperforming during a celebrity softball game. He went along with the fun, switched jerseys, flirted with his new teammate Spinderella, and all was good. That’s what Rock N’ Jock was all about: beautiful, ego-less fun.

The great thing about the fun was that, in true MTV fashion, all the network did was provide a crew of individuals with the setting to act silly, turn the cameras on, and watch magic happen. There’s really no need for scripts when Chris Mullin, Morris Chestnut, Queen Latifah, Leonardo DiCaprio, Flea, and Shawn Kemp are on the basketball court at the same time, all trying to make it through the chain net of the 25-foot basket: The show writes itself.

There’s no need for scripts, because in Rock N’ Jock, moments like the following create themselves:

Chris Connelly announcing: Looks who’s catching? It’s Jeter — how is that possible? When Pras hits this shot and McDowell decides to put a little pastry on his throw to first and they’re unable to make the play, suddenly chaos ensues, Piazza goes home, but Jeter’s got no interest in making a play whatsoever. Watch where he throws this ball, it goes a long way over third, and before you know it, it’s a daisy chain coming home.

Jeter had no interest in making a play, because he was playing catcher despite the fact that his team was up to bat. Because of this, Jeter decided to throw the ball over the third baseman’s head and then repeatedly fumble it when it was thrown back — all while his teammates were rounding the bases. Unreal.

I vividly remember watching this play on one of the 47 times they re-aired Rock N’ Jock VIII that weekend, thinking that was the coolest thing that had ever been done — in the history of ever. This play, along with other shenanigans that took place during the Rock N’ Jock contests, forever ruined any chance I had at having a true, killer instinct in sports. Yes, winning was always better and I definitely was competitive whenever I stepped on a field/court, but Rock N’ Jock taught me at a young age that friends and shenanigans > trophies and medals.

The fun and excitement that comes with celebrities interacting was definitely the selling point for Rock N’ Jock, and at the time, it seemed completely natural and appropriate. Looking back on the programming, however, it’s evident how important a television event like this was. Not since the legendary, still-hysterical Dean Martin celebrity roasts of the mid-1970s had there been such a collision of celebrities from all different arenas with the end result being classic television. Back then, in the same way that people watched in admiration as the likes of Billy Crystal, Howard Cosell, Orson Welles, Wilt Chamberlain, and Gene Kelly took turns roasting Muhammad Ali, I sat four inches from the television, virtually paralyzed with joy, as Bill Bellamy and David Justice served as the peanut gallery for the opposing team’s introductions. (Go to 2:00 immediately.)

Rock N’ Jock, like the Dean Martin roasts, upheld the great celebrity myth that all famous people are besties. In my head, for example, Shaquille O’Neal, Gary Payton, Marlon Wayans, Busta Rhymes, Jonathan Taylor Thomas, Dean Cain, Brian McKnight, Jerry O’Connell, and Stephon Marbury, all participants in Rock N’ Jock B-Ball Jam VII, hung out every weekend, whether it was just going to the movies, whitewater rafting, playing more basketball, or taking turns reading chapters from The Giver. In the present day, I can be easily swayed against the “all celebrities are best friends” myth, but not in ’97. Definitely not in 1997.

I say all of this to stress the fact that we, the world, need the next great celebrity collision. The Dancing With the Stars and the Celebrity Rehabs of the world are nice because they give the average person a chance to see a celebrity struggle, be it with the tango or crack, but they still don’t compare to Rock N’ Jock. Watching celebrities interact via Twitter is the closest thing we have to that presently, but all that’s really doing is ruining another celebrity myth: the idea of famous people actually being cool. Twitter is the opposite of Rock N’ Jock — Bizarro Rock N’ Jock, if you will — because I leave some celeb’s Twitter feed thinking “this is the lamest, least literate human on Earth,” whereas I leave a Rock N’ Jock game thinking, “I want to be Bill Bellamy.” I don’t want to think celebrities are lame; I want to idolize them for their fun-loving, casual nature. I want that, and I need that. We all do.

It’s oddly fitting that Rock N’ Jock is not a fixture on the Internet, in the sense that it hasn’t produced countless GIFs, tribute Tumblrs, and a variety of other Internet memes. It even lacks a Wikipedia page. To put that in perspective, Ochocinco: The Ultimate Catch has a shockingly detailed Wikipedia page, complete with brackets and tables, but Rock N’ Jock has nothing. Just something to think about. Digressions aside, I say it’s oddly fitting, because looking back on it, the idea of it seems too good to be true. The time capsule feeling it has, at times, makes you wonder for a split second whether or not it even happened. In this, the age of lockouts and scandals, something like Rock N’ Jock seems like the last thing that could take place. If it happened in 2011, would A-Rod do it only if he were guaranteed an equal amount of screen time as Jeter? Would Michael Rapaport agree to do it only if they agreed to show the Tribe movie on the JumboTron between innings? Would Tim Hardaway do it only if you assured him, beyond a shadow of a doubt, that no one on his team was gay?

These are the questions that didn’t matter in the ’90s. We need to get back to this place where fun supersedes logistics. There needs to be something like Rock N’ Jock that reminds us how fantastic of a world it is when our “stars” come down to earth and just hang out a little bit. Rock N’ Jock, MTV’s most underrated creation, somehow blended the worlds of a charity event, the Golden Globes, an All-Star game, and senior prom, and the end result was the most important pop culture and sports collaboration to date.