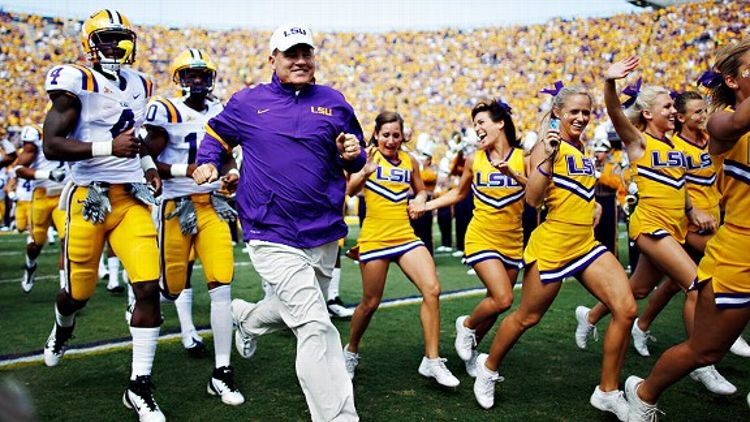 Though he’s not without his detractors, college football has finally begun to come around on Les Miles—“Les Miles’ Journey from Lucky Loser to Legendary,” went a telling headline on Bleacher Report. And while a victory this week against SEC rival Alabama and former LSU head coach Nick Saban might do wonders for Miles’ cachet, it’s not likely that he’ll ever be considered among college football’s truly elite minds. Saban, Miles’ predecessor, commands a level of respect that was once reserved for higher powers. When Alabama travelled to State College in the second week of the season to play Penn State, he was quietly billed as JoePa’s peer, at least in legacy if not in age; in 2008, Forbes coronated him “The Most Powerful Coach in Sports”–all of sports. No matter what happens this Saturday—or, really, any Saturday at this point—Nick Saban will retire a legend.

And yet, on the field, the two men have remarkably similar resumes. They are 2-2 against one another (1-1 at home), and their overall winning percentages are separated by just .7%. The teams they pilot–the consensus top two ranked teams in the country–are nearly indistinguishable. But in the democratic world of college football–the only sport in which the idea of what constitutes success is put to a weekly vote–the ability to sway hearts and minds is golden. Miles has become the life of college football’s party, but Saban is its looming patriarch. It is by his rule, and not Miles’, that we measure success.

The LSU program that Saban inherited from Gerry DiNardo in 2000 was in a state of flux. The Tigers had won a combined seven games in its previous two seasons, and failed to win an SEC game in 1999. DiNardo had worked hard to revitalize the once-glorious program that had gone from mediocre under Mike Archer to spectacularly bad under Curley Hallman; by the mid-nineties, the partying program at LSU was more highly-rated than the football team, and probably brought in more money. But the 1995 squad, DiNardo’s first, beat Saban’s Michigan State team in the Independence Bowl, LSU’s first bowl victory since the 1988 team lost to Syracuse in the Hall of Fame Bowl. DiNardo had ingratiated himself to the LSU faithful by petitioning the NCAA into allowing the Tigers to wear their traditional white jerseys at home, and signed arguably the most important recruit in the history of the program in Kevin Faulk, the first in a series of highly-rated high-schoolers to stay in-state for college. He won ten games in 1996, beat Steve Spurrier’s top-ranked Florida team the following year, and proved that the LSU program could be relevant again, even elite. In a state with enough economic and political problems to make Chicago blush, for whom the football team was suddenly the most public representative, he showed Louisianans that Louisiana was worth something. And Louisianans believed him. It’s the reason he was fired when his record slipped.

LSU’s record has not slipped since. In the eleven years since Saban first arrived in Baton Rouge, the Tigers are 118-33, including three SEC Championships and two national championships. The effects of those W’s—part economic, part cosmetic—changed the school’s public identity. While Saban was nipping and tucking the football team into consistent winners, the vast apparatus surrounding the team was also being reconstructed. In a move that showed great faith in what was to come, the university added an upper deck to Tiger Stadium’s east side just before his inaugural season, obscuring the original bowl’s classic roman arches; the outdated and asymmetrical west-side deck was torn down and rebuilt with new press boxes and corporate suites during the 2004-05 offseason. The small hill at whose base Tiger Stadium sits was christened “Victory Hill,” and is crowned by a thousand-capacity student-athlete center sponsored by an Internet service provider. Mike, the four-year-old Bengal tiger who lives on campus, is the beneficiary of an upgrade so opulent that what had once been referred to as a cage is now a full-blown habitat, complete with indoor sleeping quarters, a swimming pool, and a decorative campanile. Even the school’s twenty-five-year-old logo was revamped in 2002, replaced by an anonymous clipart tiger composed of broad lines and sharp angles.

Miles took over for Saban in 2005 and has continued to pile on victories. Though he prefers a more, shall we say, relaxed approach to football and life, LSU continues to present itself as an efficient member of the mainstream. A new P.A. system was installed prior to this season, making Tiger Stadium yet another place where the suddenly-ubiquitous “Hell’s Bells” and “All I Do Is Win” blare in the face of the marching band. Back in the years before the east-side deck was built, the area outside of the gates was perennially covered in pine straw, and a backboard with a missing rim stood guard at Gate 11. Now, it’s impossible to wander around the stadium’s concrete apron and not be convinced that you are in the shadows of some major program. Respect and reverence seem like the only natural response.

As Michael Kruse aptly noted earlier this year on Grantland, the appearance of success and success itself currently enjoy something of a symbiotic relationship, reducing what was once a fairly simple equation (success –> swagger) into a rhizomic, chicken-and-egg situation. But where, for instance, Oregon built its program on flash, hoping to capitalize on the economy of attention, Saban has moved in the opposite direction. Forget splashy color swatches and roadside billboards; his coaching philosophy–the infamous “process”–mandates that even the smallest mote in a running back’s eye is a distraction for the entire team. Any color, any personality, must be stripped from the field of vision for the machine to run efficiently. While Oregon and Maryland are busy chasing the caprices of cool, Saban is quietly redefining success as the provenance of a solitary, focused genius. In Alabama, whose helmets are absent of a logo and whose end zones spell out the school’s name in standard Helvetica, he found his perfect match–hard-nosed, technically-proficient, straight-lined football.

Conversely, the only thing straight-lined about Les Miles is the shape of his initials. Though he’s fielded some undoubtedly great teams at LSU–only twice has he suffered more than two losses in a year–he always seems just barely in control of the game in front of him. In his press conferences and interviews, he follows his own set of syntactical law, orating in a difficult-to-parse hybrid of coach-speak and legalese. “I don’t know that I could recommend that a flag be thrown, to be honest with you, off of the vision of the film,” he said of a non-call following a 2010 game against Tennessee. Like Pecos Bill tightening his rope around a tornado, he seems to exert the loosest possible grip over his team. He is, above all, a character, one in a long line of gifted weirdoes to come from the school that also gave us Shaq and Brian Wilson, and whose star football player is a three-star recruit from a Treme high school who once requested that people call him Typac T. Obama. “I want our guys to play with emotion and passion,” Miles said Monday in his weekly press conference. “Frankly, I don’t know how high too-jacked-up is.” He was mocked for having run to the wrong sideline before the Oregon game in September, but queue the video and watch his face: have you ever seen a coach who looks any happier–any more blessed–to be involved with the game of football? “I know it may appear from the sidelines that, “Oh, this guy has lost his mind,’ and that might be true,” he told the media shortly before the 2007 BCS National Championship Game. “But the truth of the matter is that we are operating with a set of circumstances and criteria that are in flux.”

Despite appearances to the contrary, football cannot be played efficiently. The very idea of it is impossible. Plays never work out as they’re diagrammed, teams who enter the season highly touted almost always fall; the existence of opposition guarantees both. Almost nothing in life is predictable, including the flow of a football game. We know this, and yet we want to believe that it isn’t true. We want to believe that our coaches–the men who lead the teams upon whom some of us stake our identities–can be trusted to be in control. Both LSU and Alabama come into this weekend’s game with highly praised defenses, and what is good defense, after all, if not the effective containment of chaos? We love these teams for their seeming ability to control the way forces beyond their grasp work against them. If stats are to be trusted, one team controls it a little better than the other. But even the best squad in the country, led by the most focused defensive minds, are failures; they’ve just failed a little less than everyone else.

It’s commonly said that football is a religion in the South, and every now and then that’s probably true. Some are calling the showdown in Tuscaloosa Armageddon–the great battle, the height and climax of human history. One team–the “good” team, whoever they might be–will win Saturday night, and, we’re told, will control not only their own fate but that of the entire college football world. There will be stability, certainty. Half of the puzzle will be complete.

But of course that’s not true. There will still be games to play. Nick Saban and Les Miles both know this. One of them is looking forward to the future.