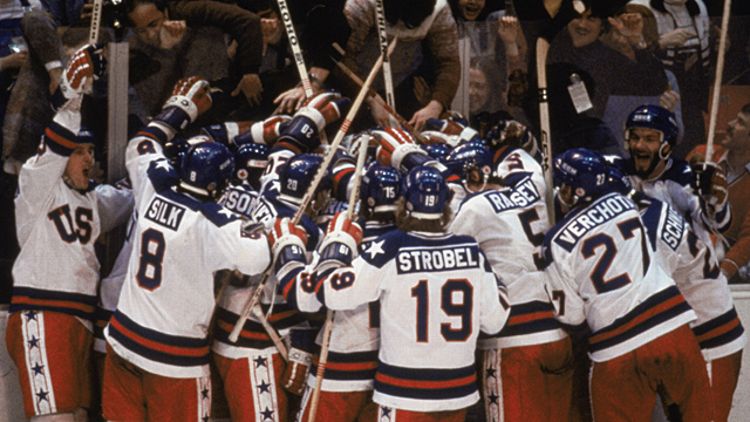 The NHL players’ association, the league, the International Ice Hockey Federation, and the International Olympic Committee met last week in an attempt to decide whether professional players will be competing at the 2014 Winter Olympics in Sochi. And while no deal was announced, the NHL is expected to once again end up sending its players to the Games. That would allow the league’s many Russian superstars to compete in their home country in what could end up being the greatest Olympic men’s hockey tournament of all time.

I think we need to rank them. Let’s do this.

Hockey has been part of the Olympics since it debuted in 1920. (Note: I refuse on principle to refer to the sport by its official Olympic name, “ice hockey.” Apologies in advance if you’re a die-hard field hockey fan who finds this lack of distinction confusing.) In theory, we could rank every one of those appearances, but to be honest, the first few decades were pretty dull. Canada dominated until 1952, then the Soviets took over, but nobody paid much attention because back then there were only about 100 people in the world who knew how to skate.

So let’s arbitrarily call this a ranking of “modern” Olympic men’s hockey. I think 1976 seems like as good a place as any to use a cutoff, since Canada and Sweden (among others) didn’t even bother to send teams that year. So let’s rank all the Games from 1980 on, which gives us a list of nine to work with.

One thing: This list is coming from a North American perspective and has that bias built in. Consider yourself warned, my Nordic friends.

Most memorable moment: This tournament used a complicated round-robin format that didn’t technically feature playoffs, but the final matchup between the Soviet Union and Czechoslovakia did end up being a de-facto gold medal game. The Soviets won, 2-0, in legendary goalie Vladislav Tretiak’s final Olympic game.

The good: The Soviets put on one of the most dominating performances in Olympic history, going 7-0 and outscoring their opponents, 48-5.

The bad: All four games in the final round ended in a shutout. Four years after the Miracle on Ice, Team USA managed only one win in five games and didn’t come close to a medal. The tournament’s leading scorer was from West Germany, which kind of tells you all you need to know.

The bottom line: The USSR was really good at hockey. Also, this tournament was awful.

Olympic hockey comes to Canada for the first time. This was technically the first year that professionals were allowed, although Eastern Bloc countries had been accused of using “amateurs in name only” for years. The top NHL players would remain unavailable for another decade.

Most memorable moment: The Soviets won gold and dominated again, but did suffer a 2-1 loss to Finland that gave the Finns a surprising silver medal.

The good: This could be considered the final bow for the Soviet machine, as they dominated the tournament, thanks to stars such as Viacheslav Fetisov, Vladimir Krutov, and Igor Larionov. We didn’t realize it then, but it was the last time they would compete as the Soviet Union. Several future NHL legends made their Olympic debuts, including Brian Leetch, Dominik Hasek, and Alexander Mogilny. Team USA also included Todd Okerlund, son of Mean Gene, so I think you have to give some extra marks for that.

The bad: This was yet another year with that annoying round-robin format, and this time the Soviets had the gold medal wrapped up before they even played their last game (the loss to Finland). Poland was stripped of a win after one of its players tested positive for testosterone, causing everyone in host nation Canada to feel thankful that none of their athletes would ever be kicked out of an Olympics for steroids.

The bottom line: I’ll be honest; I was a kid who loved hockey living in the host country, and I have no recollection of anything that happened in this tournament.

This was the last Olympics before the NHL players arrived.

Most memorable moment: “The Forsberg,” Peter Forsberg’s spectacular shootout goal that ended up being the winner and got him his own Swedish postage stamp.

The good: In addition to Forsberg’s shootout winner, the gold medal matchup saw Sweden score a dramatic goal to tie the game in the waning minutes. Slovakia made its Olympic debut and had the tournament’s three leading scorers. “Lillehammer” was fun to say.

The bad: As great as Forsberg’s goal was, this was still a gold medal game decided by a shootout. Nothing should ever be decided by a shootout. Czech star Petr Nedved played for Canada for reasons nobody understood but we all just went with. Strangely, the hockey tournament wasn’t even the most violent ice-related event of 1994, as figure-skater-on-figure-skater assault also went down that year.

The bottom line: This was a fun tournament.

Most memorable moment: Germany nearly pulled off a Miracle on Ice–level upset against Canada, before eventually losing in the first-ever Olympic shootout.

The good: Teemu Selanne and Eric Lindros made their Olympic debuts a few months before taking the NHL by storm. Nikolai Borschevsky was involved, and he’s always adorable. The new playoff format resulted in a dream matchup for the gold medal game between Canada and the Soviets … kind of.

The bad: The Soviet Union had disbanded a few months before the Games, so the Soviets competed under the Olympic flag as “The Unified Team,” which just never felt right. Notorious taskmaster/coach Viktor Tikhonov stole goalie Nikolai Khabibulin’s gold medal and kept it for himself, which is terrible and inexcusable but also kind of awesome, come to think of it.

The bottom line: You could make a case for bumping this tournament down a spot or two, but the long-awaited introduction of a real playoff format earns it some bonus points.

This was the debut of NHL players at the Games, making it the first time that the Olympics were an actual best-vs.-best tournament.

Most memorable moment: Dominik Hasek shuts down Canada in a shootout while Wayne Gretzky sits on the bench.

The good: Hasek was unbelievable, cementing his reputation as the best goalie in the world. Selanne led the tournament in scoring. Pavel Bure scored five goals in one game. Finally seeing the NHL’s best players in the Olympics was just cool, even if you had to stay up until 4 in the morning to do it.

The bad: Once you got past the novelty factor, the hockey was often borderline unwatchable. This was the middle of the Dead Puck years, and having the gold medal decided in a 1-0 game was just about the perfect symbol of how insufferable that era was. Rob Zamuner was involved, for some reason. Team USA was coming off a win in the 1996 World Cup, but their most memorable contribution ended up being trashing their hotel.

The bottom line: If we’re being honest, the NHL’s Olympic debut was kind of a bust.

Most memorable moment: Sweden gets redemption for the Tommy Salo game (see below) and captures the gold by beating Finland.

The good: Team Sweden was stacked, with names like Mats Sundin, Daniel Alfredsson, Nicklas Lidstrom, Henrik Zetterberg and the Sedins. Selanne was the tournament’s leading scorer yet again, helping Finland to a silver medal.

The bad: The North American teams were both awful, with Canada and the U.S. finishing seventh and eighth, respectively. Todd Bertuzzi made Team Canada instead of Sidney Crosby. After knocking out Canada in the quarterfinals, the Russians were shut out in two straight games to finish without a medal. Sweden might have thrown a game to get a better matchup in the playoff round.

The bottom line: If you were a Swedish hockey fan, this tournament would be your no. 1. If you were an NHL executive hoping for a popularity boost in North America, not so much.

And now we get to our podium. I don’t think anyone would be surprised at which tournaments made our top three, although the order might be tougher to get a consensus on.

The most recent tournament ended with Gary Bettman’s fantasy scenario: A Canada vs. USA gold medal matchup ending on an overtime goal from his most marketable player.

The good: Crosby’s moment was only possible because of a dramatic last-minute goal by Zach Parise to send the game to overtime. The U.S. went 5-0 in the tournament coming in to the gold medal game, and goalie Ryan Miller was tournament MVP. The Vancouver crowds were insane. Selanne became the Olympics all-time leading scorer.

The bad: The highly anticipated quarterfinals matchup between Canada and Russia turned out to be a dud, with the Russians imploding in a 7-3 loss.

The bottom line: This was a great tournament with a fantastic finish, even though it would have been more fun if the Russians had shown up. Still, it was a great Olympics highlighted by a valiant performance by the Americans. Man, those guys were great. Good ol’ Team USA. What a wonderful nation that is.

CALM DOWN, AMERICANS. LET ME EXPLAIN!

Most memorable moment: Tough call. Probably something from the Canada–Czechoslovakia consolation round.

The good: OK, obviously this is the famous “Miracle on Ice” Olympics that saw the United States beat the Soviets in an almost unfathomable upset made even more dramatic by the political tension of the day. The game was, without question, the most memorable moment in U.S. hockey history, and you could make a pretty darn good argument that it’s the most famous hockey game of all time.

The bad: Do you remember what else happened in the 1980 tournament? No, because nobody does, because it really wasn’t all that good. And while time and hype have swept this part away, the Russians weren’t even as unbeatable as history remembers them — they’d already needed a late comeback to beat Finland, and were nearly upset by Canada’s collection of college kids.

The bottom line: Still, this was the Miracle on Ice. Just on its own, that game is almost enough to get this tournament into the top spot. Almost.

Four years after a lukewarm debut at Nagano, the NHL finally got its dream tournament in front of a U.S. audience.

Most memorable moment: While the gold-medal clinching goal by Juh-yoe Sakic was close, the defining goal of the tournament was the one that proved Mario Lemieux could be magical without ever touching the puck.

The good: The gold medal game didn’t have the overtime drama of 2010, but it was an incredible contest from start to finish. Canada’s roster was almost impossibly stacked, with half the team being surefire Hall of Famers, and Team USA was a veteran squad featuring most of the greatest players the country has ever produced. Russia captured the bronze, their most recent medal heading into Sochi. Belarus was the feel-good story of the tournament, with some help from Tommy Salo.

The bad: Really, the only downside to the tournament was that the Canada–USA gold medal matchup couldn’t have been a best-of-seven.

The bottom line: This was everything hockey fans had been hoping for when the NHL became involved, and it’s the standard by which Sochi and all future tournaments will be judged.