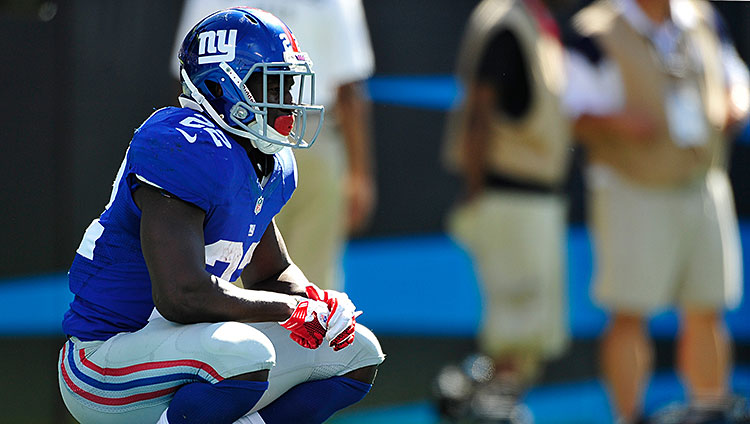 In the middle of their first full-contact practice of the season, just more than a week ago, the New York Giants were given a much-needed five-minute water break. “[Will] Beatty walks slowly into the bubble (just like most of his teammates),” the Star-Ledger’s Jordan Raanan reported in a detailed blow-by-blow of the day. “Running back David Wilson is one of the few players that sprints/jogs.”

That was no surprise: Wilson always seemed to be running — to practice; from practice; following a handoff; returning a kick. In college, he had been a star on the track team in addition to being a standout on the gridiron. Legend has it that, while at Virginia Tech, he was quick and wily enough to once barehand capture a bunny. (He must have some affinity for the speedy creature — years later, he would bounce around to Beyoncé in a giant rabbit head.)

Some athletes are lanky and graceful, with an economy of movement that makes it seem like they’re not even trying. Others aren’t quite so pretty, hustling and heaving just to get the job done. But then there’s the genre of athlete that — well, this might be a weird question, but have you ever seen sled dogs when they’re not off and running? As my colleague Brian Phillips described it, “these animals, having been bred to want to pull sleds, really want to pull them …. I watch one little guy, a black-and-tan with a shaggy belly, hurl himself forward against the restraint of his own tug line about 15 times in a row, barking up a storm, as if he’s decided to get the sled going all on his own.”

Reading that description, it’s impossible not to think of Wilson’s restlessness, of his relentless speed. He was the kind of player you could haul in to a grade-school science class to demonstrate potential and kinetic energy to the children. He certainly had that vis viva thing down.

His Achilles’ heel, of course, was a frustrating predilection for fumbles (and botched blocks), but even the most hard-hearted Giants fans often found it difficult to really get mad at the guy. (He was certainly tough enough on himself.) His upside was tantalizing: He could accelerate in ways that didn’t seem plausible, making everyone around him appear hopelessly slow. His was a swing-for-the-fences style that definitely resulted in its share of annoying strikeouts, but it also brought the odd thrilling grand slam.

After losing the ball on his second NFL carry and falling out of Tom Coughlin’s favor his rookie season, Wilson returned in a mid-December 2012 game to set a Giants record for all-purpose yards. He celebrated, as he loved to, with backflips. (In one game against the Eagles, he was so happy, he made it a double.) It was a move he’d been perfecting since he was a tyke. According to the Star-Ledger’s Steve Politi, Wilson’s father once enrolled his tiny daredevil of a son in a gymnastics class because he’d “had a young relative who broke his neck trying similar flips.”

Ironically, Wilson’s own neck would ultimately end his career. Two days after Raanan described Wilson zipping around practice, the running back was sidelined with what was described as a burner. This was ominous: In January, he had undergone spinal fusion surgery after a congenital condition affecting his spinal cord was discovered. So it wasn’t surprising when the news broke Monday that the Giants’ medical staff had advised Wilson to no longer play football. That didn’t make it any less sad.

August is the month of the contract holdout, when talking heads love to denigrate players for seeking better compensation for a brutal, body-destroying, blink-and-you’ll-miss-it career. Wilson’s injury is one more reminder of just how fragile even the most sturdy athletes can be, how even the fastest runners can be ground to a halt, and how being head-over-heels devoted to the game of football doesn’t mean it’s going to love you back.

Even in the somber team press release announcing the news, though, Wilson’s sunny disposition shone through. “I don’t want anybody to feel sorry for me, or pity me,” he said. “I lived my dream. A lot of people only get to dream their dream.” He acknowledged he was lucky the prognosis came following a relatively benign stinger, and not a more harrowing, or even paralyzing, injury in a game situation.