Q&A: Jason Giambi on Growing Up, the Best Ballpark Taunts, and His Vegas Lifestyle 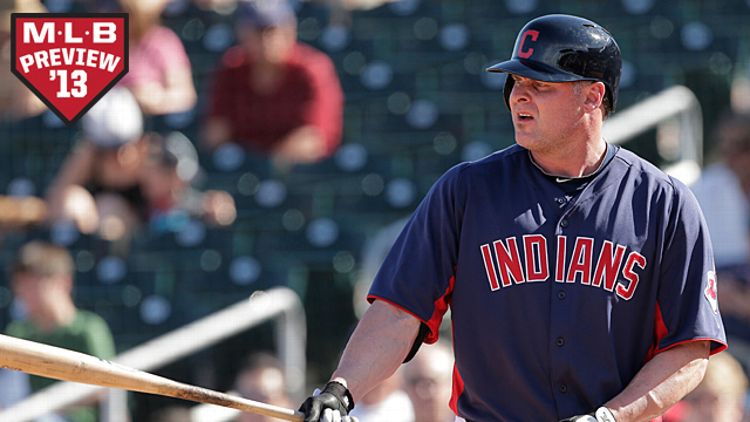 The unthinkable has happened: Jason Giambi has become a grand old man of baseball. There was a time when Cleveland’s designated hitter seemed like he’d remain frozen in the early 2000s, the relic of a goofier, more exuberant time. Giambi was an OBP warrior (praised in Moneyball), a confessed steroids user (unmasked in Juiced), and the recipient of a $120 million free-agent deal back when the Yankees were still passing them out.

But here is Giambi standing at his locker at age 42. He is graying. He uses “tutelage” as a verb to describe his role as a mentor. After a close call in Colorado last season, he’s intent on becoming a manager. Herewith, Giambi talks about becoming old and respectable.

I saw you described in newspaper articles as both an “elder statesman” and a “locker-room wise man.” As Jason Giambi, do you accept those titles?

Click here for all of our interviews with fascinating people from the worlds of sports and pop culture.
I love it. When I first came to the big leagues, I got lucky. I had [Mark] McGwire and [Terry] Steinbach and [Dennis] Eckersley and all these guys help tutelage me and speed up my learning curve in the game. I truly believe that’s how you give back to these young kids and help them. When you leave the game, that’s how you leave something behind.

Do you remember a question you brought to McGwire?

I just remember I was like a puppy dog. I would follow him everywhere. Which, in turn, let me be in the group.

When [Don] Mattingly would come into town, he’d talk to Mark. So I’m standing there listening to those guys talk. Him and Barry [Bonds] … Cal [Ripken] was talking to Mark about his regimen, how he stayed healthy. You would get all these incredible tidbits that you couldn’t pay enough money for.

What do young guys ask you about?

A lot of it is anywhere from taking care of yourself to taking at-bats. They might see a pitcher and say, “Hey, how would you hit against this guy?” Or: “What would you look for?” I even have kids talk to me about contracts: “Should I go for the most money or should I take security?”

Everything across the board. Sometimes even problems off the field.

Like, “I’m in a jam with women and money.” That kind of stuff?

Have you been in those jams?

I’ve been in plenty of jams. Like I tell people, I’ve lived lifetimes already.

Eric Chavez told me that when he first got to Oakland, he was almost terrified of being in the same clubhouse as Rickey Henderson. But he said your personality controlled the clubhouse and the rookie discomfort vanished.

That’s what we tried to do. When they came over and I was starting to flow into being more of that leader there, I was going to take those young kids and we were going to win. I knew as talented as they were, the faster I could get them to feel comfortable and the faster we could get them to learn the game and start tutelaging them, the better we were gonna be. Those kids developed so fast, it was unbelievable. Chavey, [Tim] Hudson, [Mark] Mulder, [Barry] Zito.

You weren’t a yeller and a screamer.

I’m not that type of human being. I look like a tough guy, but I’m a big, giant teddy bear.

Art Howe told me you had this delicate way of taking a player aside when you wanted to tell him something.

What you do is you pull ’em aside and say, “Hey, we need to change some things.” Me — with my personality — when I did that, it meant something.

But even the one-on-one is tricky, too, because guys have egos.

I never was an ego guy. They felt when I was going to tell them something or talk to them about something, it was not for their best [interest] but for the ballclub’s best [interest].

I notice that every time a baseball book comes out, you’re part of it.

Could you write a book?

Oh my god! I don’t know that anybody would believe it, to be honest. Everyone would be like, “There’s no way that happened.” I would probably have the most incredible book ever written by any human being on this planet.

You’ve said you hope that fans would move beyond the steroid era. But you understand that a lot of fans can’t move beyond it because they don’t feel like they know exactly what happened. The who, the what …

I understand why the fans are at where they are.

What if you found out a young player was doing steroids?

Trust me, having to go through what I went through and the sleepless nights and the hard work that I had to put in to try to get back to where I am today … It’s not worth it.

How long did you hear taunting at ballparks?

It’s 10 years later. And that’s the amazing part. There’s that human curiosity — just like you’re even asking me about it. I don’t think it’ll ever go away.

What do people say at ballparks?

Oh, I don’t even know. I don’t even listen anymore. I’ve heard ’em all. I like some of the funny ones, though. I like when people are funny.

Do you stay in touch with Alex Rodriguez?

Through other people. I run into one of his buddies and I’ll say, “Tell Alex hi.” Or I have a buddy of mine that knows Alex well and I’ll say, “How’s Alex doing? How’s his family?”

Do you worry about him, with the injuries and the Miami thing?

It’s sad. I don’t wish that upon any player.

Tell me why you like to live in Las Vegas.

No. 2, to me it’s the greatest city in the world. It’s like being in New York or anywhere in the world, because you have all the best restaurants. You have all these incredible things to do. But it’s nice and quiet and peaceful. It’s a small town. People don’t realize that when you live there, you know everyone that runs everything, that does everything.

There’s always something to do. I’m a guy who likes to do a lot of different things.

Can you see Jason Giambi as a leader of men?

I hope so. I think I’ve put myself in a good situation and I love the game and hopefully someday I’ll get that opportunity.

Terry Francona called you a “manager-in-waiting.”

I don’t know about that. I tell people, I’ve gotten such a gift. I’ve had this incredible opportunity to play for Tony La Russa and Joe Torre and Art Howe. Jim Tracy, who I learned a ton from. That’s really what put me on the path of starting to watch and think, Hey, I would really like to do this.

You’ve said that you were driven by fear as a young ballplayer. How does that register now?

I look at it as being exhausting. Because you always had this fear of failure. I think when you start to turn the word around and you use “failure” as a learning experience, it helps propel your career instead of always being afraid.

Were you up at night sweating?

When you’re young, you take all that in and you don’t know how to process it. As you start to get older, you start to think, I can play this game.

What’s the thing you could do at 25 that you can’t do at 42 that frustrates you the most?

Just feeling good all the time. Getting out of bed and not having to stretch. Not having to get as much sleep. That’s probably the biggest thing. Back then, I could get a couple hours a night and I was ready to roll.

How many hours do you need now?

Oh my god, I have to eat my AARP dinners and get some sleep so I can be ready tomorrow.

This interview has been condensed and edited, and some questions have been reordered.

The SportVU Follow-up: Answering the Most Common Questions and More Ghost Raptors