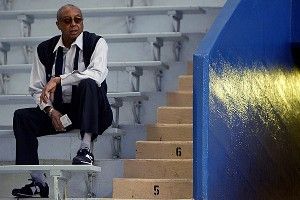 Philadelphia native John Chaney led the Temple Owls to 17 NCAA tournaments in 18 years. During his Hall of Fame career, the Owls played an unorthodox and physical matchup zone that no other team could replicate, forcing far more talented teams to leave contests against Temple both bruised and befuddled. Temple’s offense was often equally as brutal, but they hit just enough shots for Chaney to win 516 games in his tenure on North Broad Street. At their best, the Owls were a team that suffocated the will out of their opponents, routinely leading the nation in scoring defense and turnover margin. You had to beat Temple — they would not beat themselves — and opposing coaches would openly complain when they drew the Owls in the first round of the NCAA tournament.

He was not a saint, and there were parts of him that was pure South Philly. But you always knew where he stood. Chaney retired at the end of the 2006 campaign, but at the age of 80, he still closely follows the game. Earlier this week, we caught up with the legendary coach to discuss Temple’s impending move to the Big East, his former nemesis, John Calipari, and scouting tips on some of the nation’s top teams.

You’ve seen the recent upheaval with Temple finally making the move to the Big East. Would you have liked to coach in the Big East?

Your teams never played in one of the big conferences, but you were able to make the tournament 17 times in 18 years. Why were you able to have that kind of success?

Click here for all of our interviews with fascinating people from the worlds of sports and pop culture.
When I first came to Temple, I gave [my athletic director] a list of the 50 top teams in the country and I told him that we needed to play these teams as often as possible because we needed to have a strong schedule in order to make the NCAAs and we needed to get on television as often as we could because that is the way you build a program. So we would go to UCLA and North Carolina and Louisville and UNLV and say that we will play you guys twice or three times at your place and you guys could maybe come back to us once. We always played tough schedules, and that is how we could get into the field every year even though we only sometimes won 17 games in the regular season.

You were always able to have great success in the tournament, making it to the Elite Eight five times in 14 years, but you were never able to really get further. What was your most disappointing tournament loss?

Over the years, it was well documented that you had your run-ins with John Calipari when he was at UMass. These days, it seems like a lot of fans seem to root against him because of the way he is perceived. What are your thoughts about this, and is it fair?

I’ve never rooted against him. That “discourse” that we had years ago, it’s all been buried in the sand. Later that year, he and I got together for a fundraiser at the Meadowlands and he and I raised about $50,000 for juvenile diabetes. As far as how he is perceived by others, I really don’t have a comment about that. All I know is that he is a good coach, that he recruits hard, and that he gets great players and those great players always leave him as better players than they were when they arrived.

I know that you still follow the game, so I was wondering what some of your thoughts were on some of the top teams in the country.

I would say that Kentucky probably looks like the best team. They just have so much talent and their big guys are so athletic. They are gonna be so hard for anyone to match up with.

Michigan State is a great team because of my friend there, Tom Izzo, and they just play so hard and they rebound. They don’t beat themselves.

I like Syracuse a lot because they are athletic and they play a zone defense a lot like the way I used to play it.

Carolina is a team that throws the ball away too much and I think they will ultimately be defeated because they just don’t protect the ball. They are the most talented team outside of Kentucky, but of all the [no. 1 seeds] they are the one that is most likely to go down early because of that.

Kansas has a good guard and a good coach and that can take you a long way in any tournament setting.

I had to turn the TV off the other night when watching Marquette, who I thought was a good team. But they had like 23 or 24 turnovers. You can’t win like that.

This is my favorite team. They are a three-guard offense team that plays with intelligence. I like teams that have guard intelligence, and they have the best guards in the country.

I don’t like Baylor. They aren’t tough and they play too casual. I like mean and tough teams. I like teams that guard. And that ain’t Baylor.

I think Duke is good as always, but they lack a bench. They have good guards, but they are going to get into a situation where the other team’s big guys are just going to be a lot better. But I would never put Duke out of a tournament because they have a great coach.

I like Georgetown because of their coach and because they have great discipline. Discipline is so important in winning tournament games. So important. I think they have a great chance to go far.

So who do you think wins it all?

If I could pick two teams to win the whole thing I think I would go with Michigan State, and I guess Kentucky because you can’t leave them out because they are just too talented. So many great athletes. But watch out for Missouri.

And what about Temple?

I couldn’t be prouder of where this team is right now. I think Fran Dunphy is a great coach and one of the best-kept secrets in all of coaching. And I’ll be rooting for them.

Do you miss coaching more at this time of the year?

I always miss it a little bit more in March. That was always the time for cussing and fussing. I miss that.

Free Agency Day 1: The Insightful and the Incoherent