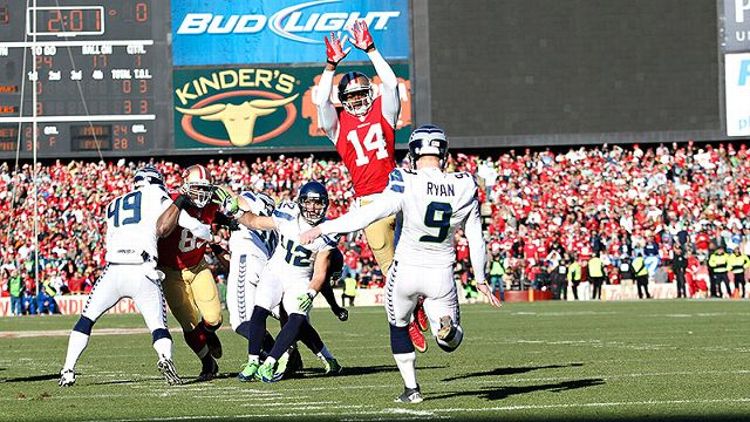 You may have heard there’s a bit of a punting controversy in the NFL this week. Here’s what happened: Toward the end of the Steelers-Bengals game Sunday night, Cincinnati punter Kevin Huber kicked it deep to Antonio Brown and Brown took it back for a touchdown. No big deal.

The problem is that Huber did his best to mix it up down the field and make a play on Brown. This did not go well. A blindside head shot from Steelers linebacker Terence Garvin left Huber with a broken jaw, ending the punter’s season, and tests later revealed Huber also has a cracked vertebra.

And that hit should’ve been a penalty. As NFL officiating website Football Zebras pointed out afterward, punters and kickers are considered defenseless players at all times, which protects them against exactly the kind of hit that Steelers linebacker delivered.

NFL VP of officiating Dean Blandino confirmed it this week: “Huber, he’s a punter. And the key is he’s defenseless throughout the down. So even though he’s pursuing the play, he still gets defenseless-player protection.”

“This is an illegal block,” he added. “It should have been a flag for a 15-yard penalty. You can’t hit him in the head or neck, and you can’t use the crown or forehead parts of the helmet to the body. So this will certainly be a point of emphasis this week, especially with our referees who are responsible for the punter on plays like this. We have to watch the punter, he’s defenseless.”

Where does this get complicated? First, some takes.

“Every football player or every person who puts pads on should be embarrassed for this quote,” Mike Golic said of Blandino’s explanation. “We’ve seen punters make tackles before, have we not? They’ll push someone out of bounds, they’ll throw their body and probably scream like a woman when they do it … I’m just kidding.”

Sports Illustrated‘s Doug Farrar asked him about the controversy this week, and Ryan said the hit was dirty for any player, but punters shouldn’t be considered “defenseless” out there. He explained, “Honestly, I wasn’t even aware of that rule. I always kind of thought that once you got down there, you were fair game.”

Ryan added: “When I go in and try to make a tackle, I think I’m fair game — I’m part of the play.” And this is where we have to clarify things. So with that in mind, here is a PPSA — Punter Public Service Announcement.

There a lot of Mike Golics out there. They shame you because you’re different, and all you want to do is belong. If you’re punting in the NFL, you’re probably a great athlete who performs under ridiculous pressure like everyone else, but everywhere you go, you get treated like the Screech of your sport. It sucks.

But you shouldn’t WANT to be considered “fair game” on a football field.

This is crazy. This is like volunteering for the Hunger Games. You are not Katniss, punters. You are Peeta, a sacrificial lamb who survives only because of the benevolence of others. Sometimes fans wonder how long they would last if they were just thrown into an NFL game one day.

And you, punters, give us all a nice preview.

Every now and then, there’ll be a Pat McAfee exception to the rule, but in general, these situations don’t end well.

All you young punters out there, please just ignore everything Jon Ryan just said. You’re a specialist. You’re a snowflake. If Mike Golic thinks you’ll scream like a woman when you have to make a tackle, that’s because punters and kickers are probably the only sane people associated with professional football.

“I don’t think you should just punt the ball and walk off the field,” Ryan says. “You’re still a football player.”

You are not real football players, punters. Embrace it. Dive at someone’s feet right this second. Fall out of bounds. Leave real football to the humans who aren’t totally human. Forget Mike Golic.

In fact, every punter’s worst nightmare for a solid decade is actually the best teaching point here. From Jeff Pearlman’s Boys Will Be Boys:

[Deion] Sanders was a feather-duster. When he tackled, it was with the gusto of a 90 year-old woman. “One time a running back ran a sweep toward him, and Deion dove halfhearted into the turf,” says Case. “We’re watching film the next day, razzing him pretty good. As serious as he could be, he said, ‘I saw that dude coming and I had to make a business decision.'”

It may not be “cool” to be a 90-year-old woman every Sunday. But it’s good business. Remember that the next time some 170-pound receiver is approaching you flanked by 270-pound linebackers.

You’re not real football players. You are different.

Filed Under: NFL, When Keeping It Real Goes Wrong