A History of Volatility: Jose Mourinho Says He Wants to Stay at Chelsea, But He Says a Lot of Things 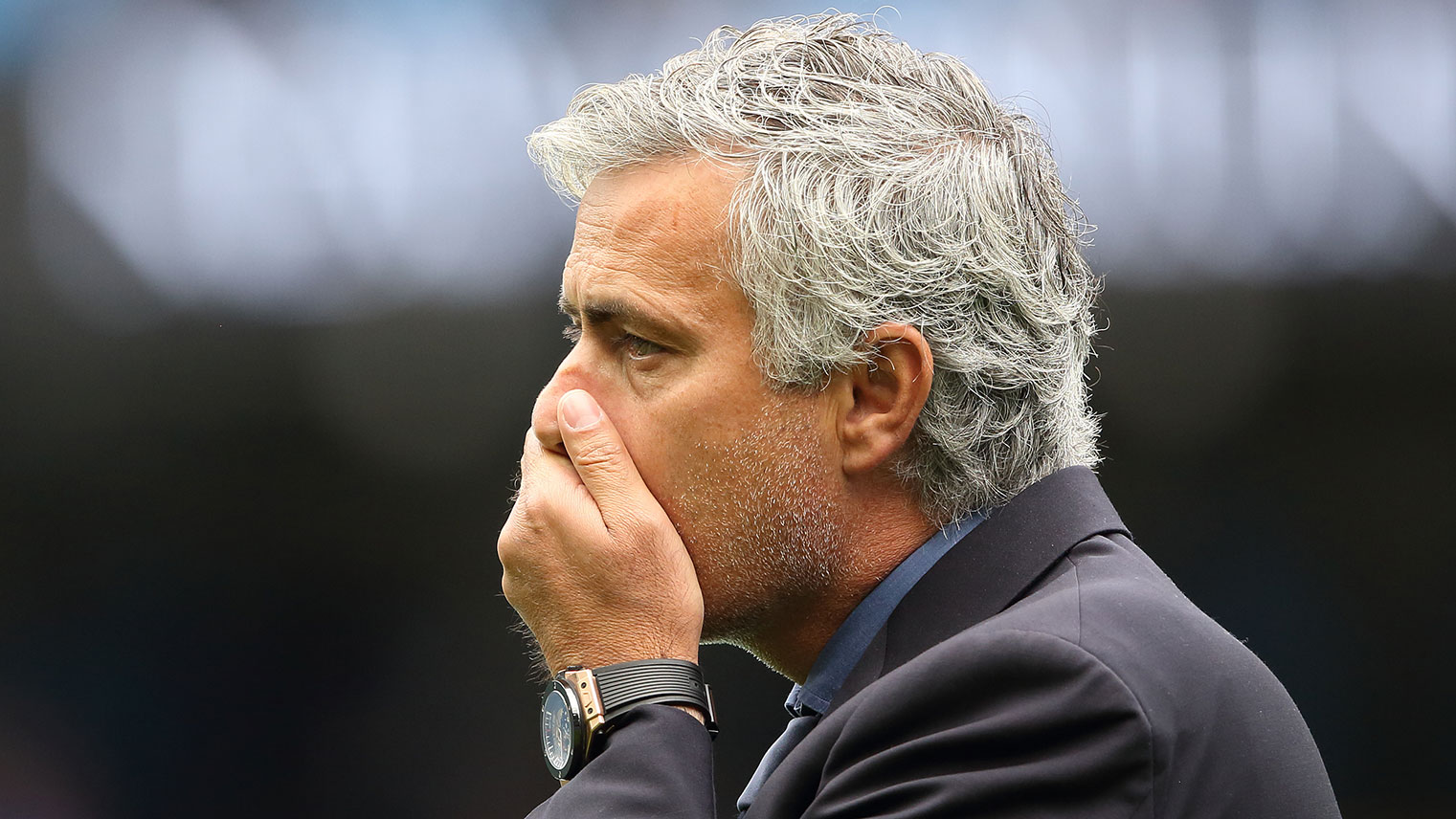 The last two weeks at Chelsea have already pushed the club’s title-winning 2014-15 season way out of view. First, they opened the campaign with a home draw against Swansea City. Then, Jose Mourinho relieved the team doctor, Eva Carneiro, of her sideline duties under dubious circumstances. And in the first game without Carneiro nearby, the defending champs got smoked by Manchester City, 3-0, and now sit five points back of the top of the table. During the loss, for the first time in either of his stints at the club, Mourinho subbed out his captain, John Terry, at halftime.

Given all of that, this quote from February seems particularly rich:

I’m very, very happy. If somebody tells me I’m going to make ten years at Chelsea, I would say yes. I’m happy to be a part of this new Chelsea, and hopefully I can stay for many years.

Before this season, Mourinho, who hasn’t spent more than three full seasons at any club, made it no secret that he sees Chelsea as the place where he can finally settle down. And earlier this month, he essentially put his money where his mouth was, signing a contract extension that would keep him in London through 2019. Planning for the future is all well and good, but that’s just not how the Mourinho Experience works.

On the field, it looks like this: Mourinho builds his teams to control the space in front of the goal and then work outward from there. Sometimes this leads to breathtakingly fast and intricate attacking work, but the defining characteristic of his teams is how tough they are to break down. If your club needs to score a goal against a Mourinho side, prepare for 90 torture-filled minutes of hopeless long-range shots. He’s the best defensive manager in the world, and his teams win trophies for that reason — until they inevitably don’t.

Mourinho will pontificate about referees by citing minute numbers, or poke Tito Vilanova in the eye, or get banned for making handcuff gestures.1 And then everybody gets so spun up, oohing and aahing over his latest antics, that his team’s struggles quickly recede into the background, and before you know it, the next game’s here and he’s waltzing to yet another 2-0 victory. But eventually those wins stop coming so often, the coach’s antics begin to outweigh the team’s performance, and Mourinho finds a new club where he can do it all over again. 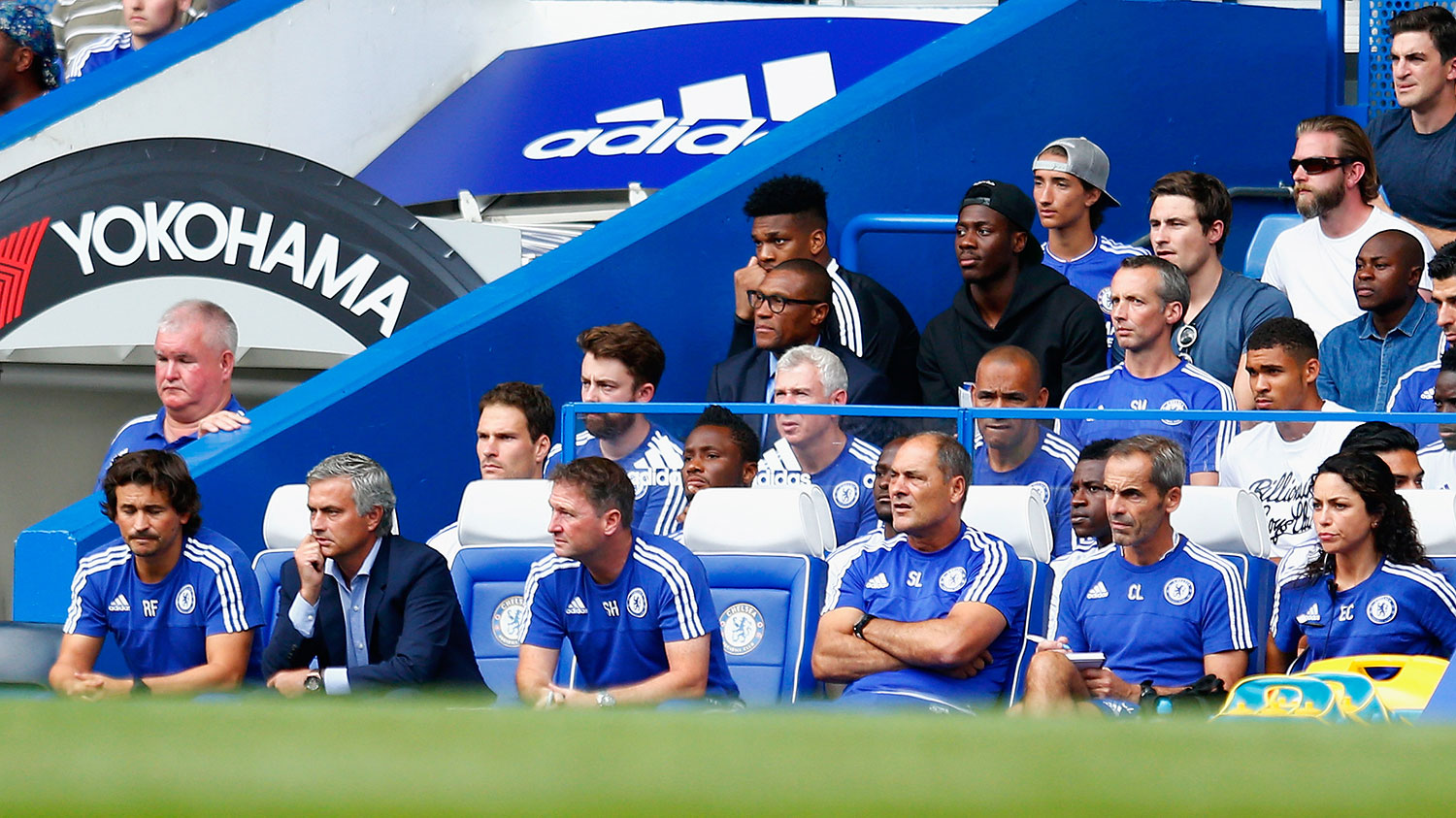 For the most part, we’ve already accepted the narrative manipulation as part of Mourinho’s genius. Come game time, we’re all talking about that thing, whatever it was, that Mourinho said, and then we realize we haven’t been talking about the thing that really matters: the actual game. Mourinho, being a manager of a professional team, seems to know that the game itself matters above all else, and he’ll shift the story away from on-field performance whenever his team’s not playing well.

So, what to do when the off-field conversation matters more than the state of Chelsea’s back line?

What started as Mourinho screaming at his medical team of Dr. Eva Carneiro and physio Jon Fearn for going onto the field to assist an apparently injured Eden Hazard in the latter stages of the season opener against Swansea City then quickly devolved into the pair’s removal from the sideline during games, and ultimately ended up with this report from Duncan Castles:

Mourinho is said to have held reservations about Carneiro’s role within the first-team squad since at least last year. While there is no question about her professional abilities, the Portuguese coach was concerned that the dressing room dynamic was affected by the presence of a female. According to a source, some players had expressed misgivings to the coaching staff about the set-up, arguing that it forced them to alter their usual behavior in a team environment. Famous for his attention to detail, Mourinho has always sought to eliminate factors that might reduce his team’s likelihood to win matches.

Now, this is an anonymous report and nothing’s been confirmed, but Castles is well sourced with the club, and the information likely comes from someone at Chelsea. Given the slant of the piece, it looks like someone at the club trying to spin a defense of Mourinho.

There are other factors here, too. Carneiro joined Chelsea in 2009, while Mourinho was at Inter. And since Chelsea carry such a thin squad and play a very clear starting 11, Mourinho’s been especially — if unrealistically — demanding when it comes to keeping his key players healthy. As we saw with Pep Guardiola and Bayern Munich in April, these über-competitive high-level managers need to have everyone available, and when they don’t, the medical staff catches the blame.

Rather than focusing on any of that, someone at the club likely thought it made sense to shift the focus to “female doctor is a distraction.” And it’s something we’ve seen before: Carneiro is good at her job. She is also a woman. Therefore, her job is at risk. Wherever the blame should fall, the idea gets reinforced. The world of professional sports remains a toxic environment for women, whether it’s the women who cover it, want to coach in it, or simply want to watch it. And, of course, plenty of the fallout centered on the way Carneiro looked and not, you know, on any of the things that actually apply to the situation — but that’s standard Internet fare at this point.

In Mourinho’s pregame press conference over the weekend, he kept being asked about the situation with his medical staff, so he started to refuse questions and ultimately almost walked out. Sure enough, as Manchester City coasted to a surprisingly easy three-goal victory Sunday, chants of “Eva, Eva, Eva”2 could be heard ringing around Etihad Stadium. The cycle was complete: The thing that actually mattered had became fodder in the story starring Mourinho.

And the next phase has already begun: Mourinho called the win by Manchester City “completely fake,” bemoaning what he felt was a missed red card on Fernandinho. He also subbed out Terry at halftime, providing reporters with plenty of new questions to not get answers to. Forget about Carneiro; what can you tell us about your captain?

For two seasons, it’s been easy to forget the past and believe that Mourinho would be at Chelsea for a long time. In his first year back, he spent the season managing expectations and claiming that his team was a little horse that couldn’t win the title.3Then, in Year 2, Chelsea were imperious and had the Premier League title all but wrapped up by the end of January. And, sure, Mourinho is kind of an asshole, but being an asshole somehow seems sort of charming when your team’s coasting to the finish.

Yet, historically, Year 3 is right about when his teams have begun to slip and when things have started to unravel. The fights Mourinho picks and the red meat he tosses to the press hurt the club once the team stops winning. When he left Chelsea the first time, it was amid rumors of tension with owner Roman Abramovich and a power struggle within the organization. When he departed Madrid, he left behind a deeply divided locker room, thanks to his benching of goalkeeper/religious figure Iker Casillas.

This brings us to the critical point in Mourinho’s career. For all the trophies he’s won — eight domestic leagues, two Champions Leagues, and many others — he has yet to prove he can be the Sir Alex Ferguson or the Gregg Popovich–type figure who leads a franchise through ups and downs but into multiple cycles of success. He’s simply never taken a team that’s dipped and brought it back up again. And given the inherent volatility in all sports, and especially in soccer, you’re bound to have these drop-offs — no matter how talented your roster is or how sharp your tactics are.

Now, Mourinho doesn’t have to stay anywhere, but he says he wants to stick around at Stamford Bridge, and if so, navigating failure becomes part of the gig. Arsene Wenger has been at Arsenal since 1996, he built the only team to go undefeated in the Premier League, and he also went 10 years without a trophy. (Mourinho called him “a specialist in failure.”) Ferguson, maybe the most dominant manager of them all, took over Manchester United in 1986 and didn’t win his first Premier League until 1992-93. After that, he dominated the league for a generation, but even he had to deal with a three-year stretch without a Premier League title after the 2002-03 season.

This isn’t to say the current iteration of Chelsea is destined to drop out of the Champions League places or anything like that. This team is fine. They’ve had a rough start to the season, but it’s been a grand total of two games.4 They’ll be competitive; there’s too much talent on the squad and Mourinho is too good a manager for anything else to happen. But being competitive isn’t the same thing as winning, and there’s a decent chance Chelsea doesn’t win anything this year. In the past, that’s never been good enough to keep him around.

And of course, the latest wave has already begun: Before the loss to City and his problems with Carneiro, Mourinho spent the summer telling the wife of Real Madrid manager Rafa Benitez that her husband needed to watch his diet; trolling Wenger; and throwing a second-place medal into the stands. It all might’ve seemed funny at the time, but now it feels petty. He might be the best manager in the world, but he might also be the worst loser.

The previous two weeks have driven home the point: Mourinho wants to provide longevity, but don’t expect him to ever offer any stability. It’s amazing and kind of hilarious how often he’s able to take pressure off his team with a story he pulls out of thin air, but it becomes familiar and depressing when the story’s real and includes suggestions of casual locker-room sexism. Eventually, the next distraction takes its place, though, and Mourinho gets to focus again on winning. But failure on the field comes for everybody at some point, and if he’s going to stay at Chelsea for a decade, he’ll finally have to pick up his own pieces.

Then again, why should we even expect him to try? And how do we know Mourinho really wants to stay? After all, it’s just something he said.

The Dolphins’ Mission of Mediocrity