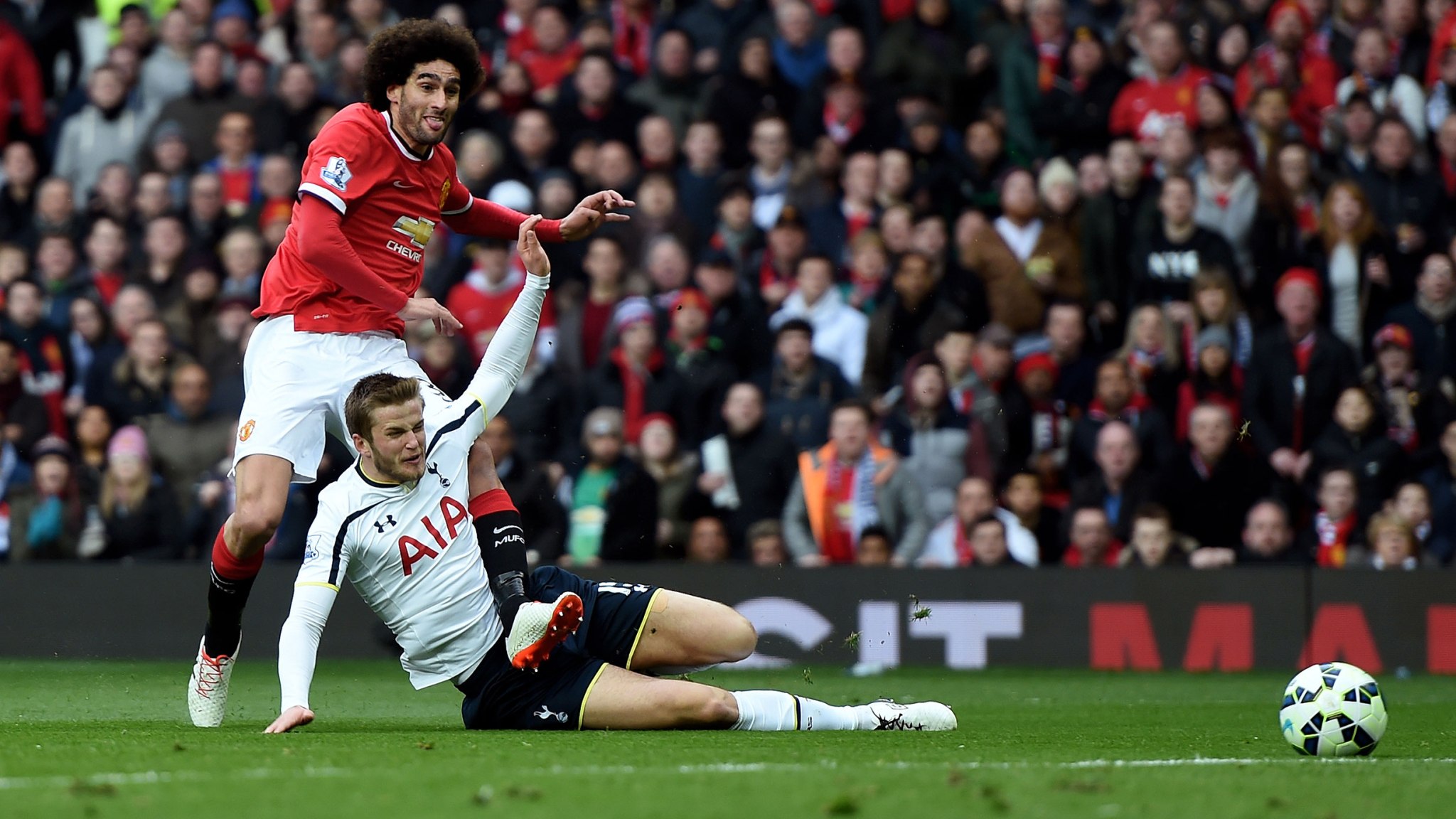 That didn’t last very long, did it? Eight minutes into yesterday’s game at Old Trafford, Manchester United split open Tottenham’s midfield with a move that was capped off by a clinical left-footed finish from Marouane Fellaini. (Yes, you read that right.) It was the first step in a comfortable 3-0 rout that both solidified the Red Devils’ hold on fourth and most likely ended any realistic chance that Spurs had of challenging for the Champions League.

The goal was simple — three straight-passes and a shot — but the way Spurs allowed it to happen is indicative of two larger ideas: (1) how hard it can be to press effectively, and (2) how the nebulous concept of “midfield movement” can change games.

When the play starts, there’s very little danger for Spurs. Center back Phil Jones has the ball and is about to play it out to left back Daley Blind. What’s notable at this point is the positioning of both teams: With their defensive line situated well up the field, it sure seems like Spurs — at once narrow and compressed — want to press the ball. At the same time, United’s attackers remain extremely high up the pitch. Wayne Rooney, Ashley Young, and Juan Mata are all playing right on the edge of Tottenham’s defensive line, and Fellaini drifts forward to join them. None of those four players moves back toward the ball to receive a pass. 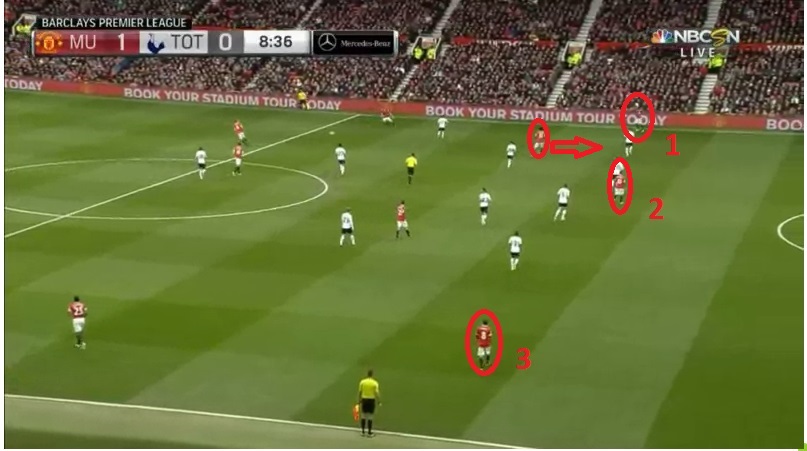 The factors behind Tottenham’s capitulation are twofold. First, Nacer Chadli moves to double-team Blind — a perfectly normal decision within a pressing team. When the ball goes to the sideline, teams use the boundary as an extra defender and try to force their opponent to move the ball backward. Of course, this is in contrast to how a more conservative team would deal with the situation: Most likely, Chadli would drop into a defensive position deeper in his own territory. And second, Spurs midfielder Ryan Mason moves with Fellaini as the big Belgian drifts into a wider, more advanced attacking position — also a justifiable decision on its own. Fellaini is frequently the target of long balls that initiate attacks, and with Young and Rooney already occupying defenders, the man with the ’fro needs to be picked up.

When both of these things happen at once, though, Spurs have a problem. Mason moving backward and Chadli moving forward opens a gaping hole in the midfield. Michael Carrick recognizes this and quickly darts forward into the vacated area. Mason charges forward hopelessly late — and the rest is history. 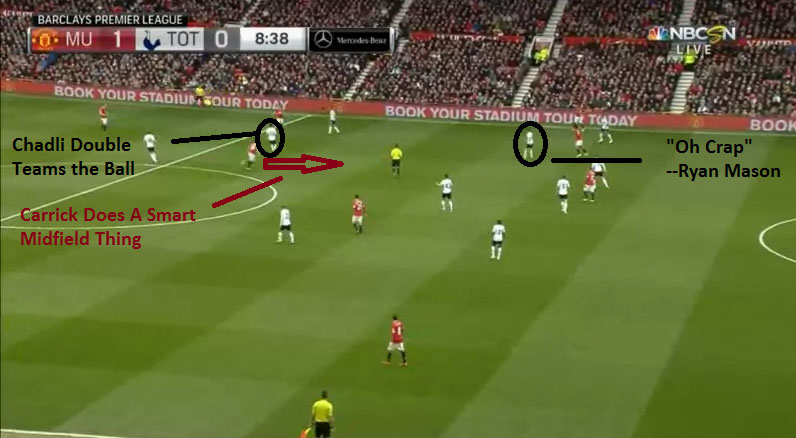 Usually, this moment never develops. Usually, Blind swings the ball backward under pressure, either returning it to Jones or dropping it even deeper to keeper David De Gea. Anticipating this, a midfielder like Carrick usually, instead of darting forward, drifts backward so that he can drop between the two center backs and make himself a passing target for the keeper.

Instead, the play happens because Blind and Carrick both recognized an opportunity to break the first line of Spurs’ pressing. Carrick makes a clever run that is deceptively difficult to time well. Had he left before Chadli committed to doubling Blind, the attacker would have just stuck with Carrick and tracked his run. Had he left too late, Chadli and Andros Townsend would have already closed down the passing lane. Meanwhile, a worse ball from Blind would break United’s momentum: too heavy and Mason would be able to contest Carrick as he received it, too soft and the pass to Fellaini would have become longer and harder to execute.

For a United team that has been extremely conservative all year long, going too often for the safe option, the decision by Carrick and Blind to be proactive is an excellent sign.

Even still, Spurs made it too easy for United. One of the dangers of pressing the ball aggressively is that it shrinks a team’s margin for error. Once the first line of the press is broken, defensive responsibilities have to change. From the outside, it’s hard to know what’s supposed to happen here — whether right back Kyle Walker should abandon Young and crash inside, inviting Carrick to pass the ball wide, or whether center back Eric Dier should move earlier and more aggressively to Fellaini and leave his partner Jan Vertonghen one-against-one with Rooney in the middle — but the fallback plan certainly wasn’t for Mason to charge toward Carrick woefully late, leaving the United midfielder with plenty of time to pick out a wide-open Fellaini, who could then turn and shoot without being bothered by a later-arriving Eric Dier.

Beyond the immediate takeaways, Fellaini’s goal also shows just how difficult midfield battles are to quantify. If Carrick hadn’t made that run, no one would have noticed. If Chadli had managed to force Blind backward, he wouldn’t have been awarded with making a goal-saving play. Over the course of a season, though, these small moments start to add up.

Sadly for Spurs, situations like the one Carrick took advantage of have been all too common. Time after time, their midfield has failed to stop attacks that progress right through the center. Slow reactions and late rotations have led to a continuous stream of good scoring opportunities that will ultimately keep them from seriously challenging for a top-four place.

The surprise on Sunday, then, wasn’t that the opportunity to break forward was there for United, but rather that they found a way to take advantage of it. If Louis van Gaal’s men can continue to be more incisive with their passing and their movement, then they have an excellent chance of returning to the Champions League. Just don’t expect it to be as easy as it was yesterday.