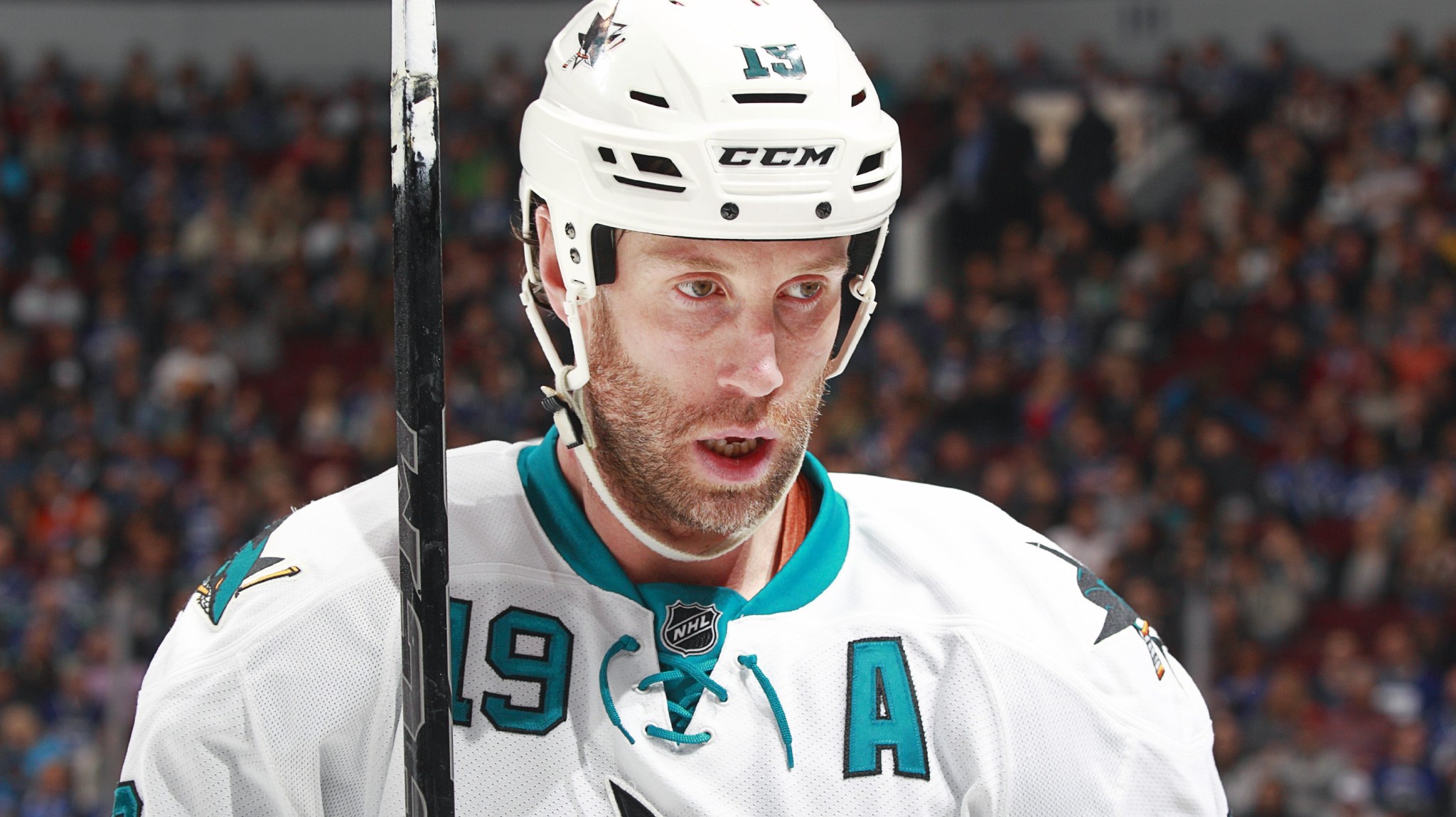 Theme of the Week: The Sharks Finally Implode

If you’re a regular reader of this site’s NHL coverage, you’ve watched us spend the better part of a year trying to figure out the San Jose Sharks. When everyone was blaming Joe Thornton for last year’s crushing playoff loss, we defended him. When they seemed to promise to hit the reset button over the offseason and then didn’t, we were puzzled. When they vowed to be better, we wanted to believe. When they took it outside against the Kings, and lost, we were there. And then we basically gave up trying to make any sense of it all, because this seemed like a team waiting for a wrecking ball that didn’t want to arrive.

It may have arrived over the weekend, as a long-simmering tension between franchise player Thornton and general manager Doug Wilson suddenly blew up in a very public way. The seeds were planted earlier in the week at a gathering of season-ticket holders, when Wilson answered a question about stripping Thornton of the captaincy by explaining that Thornton had “such a big heart that when stress comes on him, he lashes out at people.” Wilson also described delivering the news to Thornton, saying: “I sat him down and said we need other players to step up and share this. He got it. He didn’t like it, but he got it and he understood it.”

Not exactly the most cutting critique ever offered, but it was apparently the final straw for Thornton, who responded to the charges of lashing out under stress by, well, lashing out. “Doug just needs to shut his mouth,” Thornton told San Jose Mercury News reporter David Pollak on Friday. “He just needs to stop lying, shut his mouth.”

And with that, it would appear, we can probably move this whole mess from the “awkward” pile over to “completely unfixable.” Clearly, this blowup has been coming all season long, and the inevitable attempts to patch it over will now ring hollow. The Sharks, at least off the ice, appear to be officially broken.

On the ice, all of this is going on right as the Sharks head into the homestretch very much in playoff contention. They’re four back of the Jets for the West’s final wild-card spot and had an opportunity to close that gap in Saturday’s matchup against the Hawks. Instead, they gave up four third-period goals on their way to dropping a 6-2 decision. They face the Jets tomorrow night in a crucial game that also serves as the opener to a tough seven-game road trip.

Maybe Thornton’s mini meltdown emerges as the rallying cry for a team that has seemed to be drifting along all season without any real direction. Or maybe it’s just the spark that finally lights the wick for this team to be blown up once and for all in the offseason. We won’t be able to fill in the proper narrative until the Sharks’ season ends. In the meantime, we should all probably shut our mouths, just in case we accidentally imply that Joe Thornton sometimes lashes out.

5. Montreal Canadiens (43-19-7, plus-26) They’ve lost five of seven this month and would surrender first place in the Atlantic with a regulation loss to the Lightning tonight.

4. Anaheim Ducks (44-20-7, plus-10) Still a tough team to figure out. They’re two points out of first overall, despite owning a worse goals differential than the 18th-place Senators.

1. St. Louis Blues (44-20-5, plus-38) The Blues regain the top spot, although it’s an admittedly shaky hold. With games against the Flames, Jets, and Wild this week, they’ll get to influence a Western wild-card race that could determine their first-round opponent.

With seven teams bunched within five points at the top of the standings, you could basically shuffle any of them into a top five in just about any order and it would be hard to argue much. All the top contenders look unbeatable some nights and deeply flawed on others. Anyone who tries to claim that there’s anything approaching a clear Cup favorite in this group is either fooling themselves or a shameless homer.

All of that said, there’s one team making its debut in our top five, and it’s probably long overdue. After a slow start, the Rangers have been among the league’s best teams over the past three months, and they have now moved into sole possession of first place in the Metro. That division has felt like a four-way race for weeks, but with the Islanders, Penguins, and Capitals all cooling off, the Rangers may run away with it.

That’s impressive, considering the team has been without its best player for more than a month. Henrik Lundqvist’s throat injury has kept him out of the lineup since the first week of February, and with unheralded backup Cam Talbot temporarily forced into a full-time starter’s role, that was supposed to spell doom. Instead, Talbot’s been fantastic, and the Rangers have gone 15-2-3 in Lundqvist’s absence.

Meanwhile, Rick Nash keeps scoring, the rest of the offense remains balanced, and the defense continues to be close to impenetrable — the team has yet to allow more than a single goal in regulation over seven March games. And the team was among the most aggressive at the trade deadline, overpaying to bring in Keith Yandle. That move hasn’t really paid off yet, but it almost certainly will, and when Yandle starts to click and Lundqvist returns, it gets tough to find a team in the East that looks likely to beat these guys.

The Rangers now head into a tough stretch of the schedule, with three of their next four coming against the Hawks, Ducks, and Kings. The way things are playing out, one of those games could end up being a Stanley Cup preview.

5. Carolina Hurricanes (26-34-8, minus-24) The Hurricanes return to the list, despite last night’s win over the Blue Jackets.

4. Toronto Maple Leafs (27-37-6, minus-36) Nazem Kadri returned to the lineup after a three-game suspension for … something. Oh, and the Sharks are in town Thursday in what’s shaping up as a battle for sideshow supremacy.

3. Edmonton Oilers (18-39-12, minus-77) They’ve lost all six games in March1 and have given up an average of just less than five goals per game over that stretch.

When you’re talking about one of the league’s worst teams, it feels somehow wrong to talk about things going well. But there’s really no other way to describe the last few weeks of the Coyotes’ season. They went on a long losing streak, which was good because it moved them back into the race for last place and a guaranteed top-two pick. And then GM Don Maloney knocked the trade deadline out of the park, earning a spot on just about every winner list thanks to a series of deals that saw the team load up for what now feels like a very promising future.

So of course, as Coyotes fans have come to expect, the positive vibe couldn’t last. On Friday, the franchise provided an update on its financial situation, and the news was … well, mixed. The team says it lost about $16.5 million for its first fiscal year under a new ownership group. That doesn’t sound good, but it’s actually slightly better than the projected loss of $20 million.

But the team also reported a second number, which included some one-time costs (including the Mike Ribeiro buyout), and that one came in at a total loss of nearly $35 million. That’s a key number, because the team has an out clause in its arena lease that can trigger if the team loses $50 million over the first five years. The $35 million counts toward that number, meaning the team is essentially 70 percent of the way there after just one year. And once the out clause is triggered, the team could theoretically escape its lease and move somewhere else.

That “theoretically” qualifier is an important one, since there’s nothing automatic here. The team could blow past the $50 million mark and still decide to stay. And ownership still says the Coyotes could be profitable, or at least break even, fairly soon. So Friday’s update is far from a disaster. But for Coyotes fans who are no doubt sick and tired of almost two straight decades of “when will the team finally move?” stories, anything that pushes that option back on to the table has to feel like bad news, even in a season that’s been largely full of positives.

• A lot can change when you take a week off. Just 11 days ago, the Panthers were closing in on the Bruins for the East’s final playoff spot. Since then, the Bruins have caught fire, catching up to the Capitals before last night’s loss in Washington dropped them two points back.

• As for the Panthers, they’re staying in the hunt, winning three straight before last night’s loss to the Rangers. But they’ve been joined in the hunt by the Senators, who are still riding the remarkable story of 27-year-old rookie goalie Andrew Hammond.2

• The Penguins lost Sidney Crosby to illness and Evgeni Malkin to injury in Saturday’s 2-0 loss to the Bruins. Crosby returned for yesterday’s 5-1 loss to the Wings, but Malkin remains out with a lower-body injury that, at least at this point, doesn’t sound especially serious.

• That Red Wings win was a nice boost for a Detroit team that had gone cold, falling closer to wild-card status than to the top of the division. They’re now off until Thursday.

• In the West, the defending champs remain on the outside, with the Kings sitting one point back of the Jets and two back of the Flames after Saturday’s loss to the Predators. They can close the gap tonight, when they face the lowly Coyotes while Winnipeg and Calgary are idle.

• The Wild earned a 3-1 win over the Blues on Saturday, behind yet another fantastic performance from Devan Dubnyk. The Wild remain entrenched in fourth place in the Central but have quietly moved up to 12th overall in the league.

• If you’re wondering what the standings would look like without the loser point and/or shootouts, you can now check out various alternate formats at war-on-ice.

• Finally, the NHL GM meetings take place this week in Florida.3 Key items on the agenda include video review for goaltender interference and introducing three-on-three overtime in an attempt to reduce the number of shootouts.