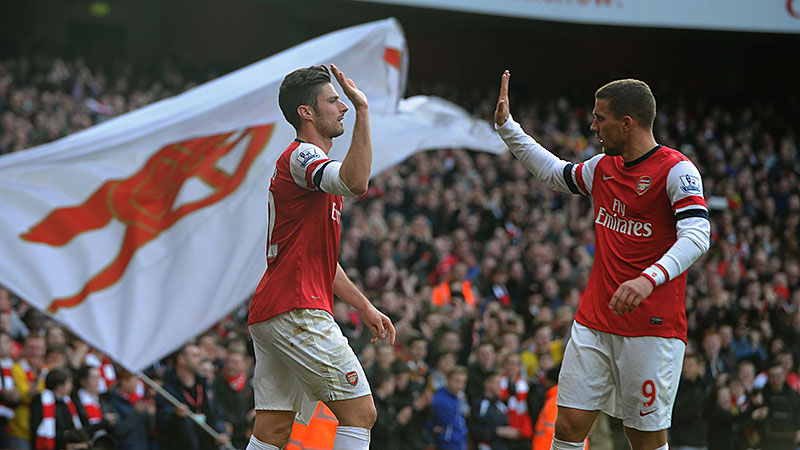 A look back on all the weekend’s Premier League action.

Mike L. Goodman: With 11 games left in the Premier League season (12 for a few teams, including Manchester City and Everton) it’s time to call the Champions League race. Two of Liverpool’s biggest rivals for fourth, Tottenham and Everton, both lost this weekend, widening their lead to six and 11 points, respectively. Those six points might not seem insurmountable, but Liverpool have a better chance at overtaking the teams in front of them and claiming an extremely unlikely Premier League title than they do of dropping enough points to fall out of the all-important fourth position.

Everton’s Champions League hopes have slowly dwindled away over the last month, and it’s somehow fitting they’d finally give up the ghost while putting up a strong fight on the road against Chelsea before ultimately losing. Quality performances without the end result has become a hallmark of Roberto Martinez’s Everton team as the season has stretched on, especially in the wake of injuries to Ross Barkley and Romelu Lukaku (who couldn’t have played against Chelsea, the club he’s on loan from, anyway). After a decade of ruthless pragmatism under David Moyes, a season with similar results achieved in a different manner may be enough, but the late-season swoon is a reminder that just because you change the manager, it doesn’t mean the same challenges don’t still exist. Everton simply don’t have the squad depth or resources of the other top-of-the-table contenders, and they’ve struggled to deal with the injuries that inevitably occur over the course of a Premier League season. As they limp toward the end of Martinez’s first year, the long-term question for Everton remains whether the stylistic flourishes of the new manager can overcome their very real structural obstacles. 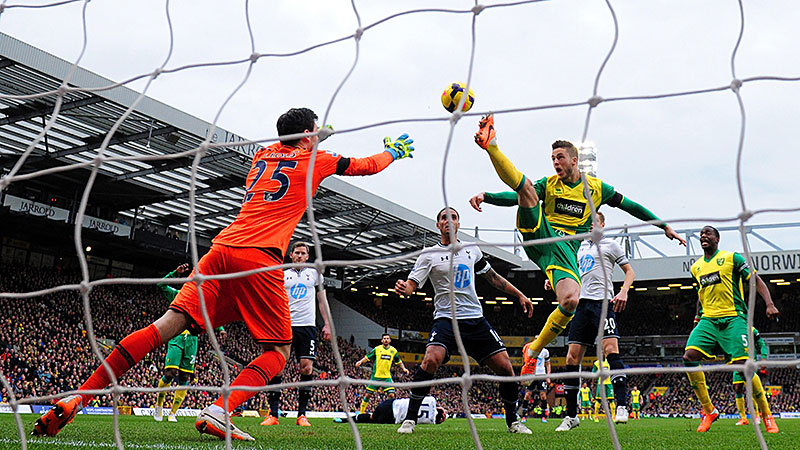 If Everton’s Champions League hopes drifted away under the cover of a series of pretty performances without results, Tottenham’s came crashing down with one utterly putrid display. Of course, the thing about Spurs’ 1-0 loss at Norwich is that it’s the kind of result the underlying numbers have hinted at since Tim Sherwood took over. A combination of otherworldly finishing from Emmanuel Adebayor and last-ditch defending and goalkeeping has masked some fairly poor performances from Spurs and allowed the squad to remain within striking distance of Liverpool. Those aren’t things you can depend on every week, and the game against Norwich showed why. If you aren’t creating a lot of chances, eventually there will come a time when you don’t convert any of the handful you do. Spurs are actually lucky that week didn’t come before now.

Four teams are beginning to run away and hide at the top of the table. Everton and Tottenham are emblematic of exactly how hard it is to win in the Premier League. The Toffees have played well but haven’t been able to get the results they need. Spurs got results, but the fact they weren’t playing well eventually caught up with them. For both clubs, their shortcomings have effectively ended their Premier League seasons early, barring a miracle. Everton have the FA Cup left to chase, and Spurs have the Europa League. But for both clubs, that’s a cold comfort.

Chris Ryan: OK, so it’s not the Fibonacci sequence of a goal they scored against Norwich earlier in the season, but Arsenal’s first on Saturday, in their 4-1 execution of Sunderland, was pretty special. Around this time of year, we’re always talking about teams getting stretched thin by playing in multiple competitions. Guys get injured and bad losses can negatively affect team morale. Last week, Arsenal lost to Bayern Munich in a pretty demoralizing way and saw Kieran Gibbs limp off the field with a hamstring injury. This could have been another chapter in another version of the best seller The North London Book of the Dead: A Complete History of Arsenal’s February Collapses. Instead, the Gunners came out like a team that had been training against the best in the world and were dipping down a division to dispatch Sunderland. Champions League, man; membership has its privileges. 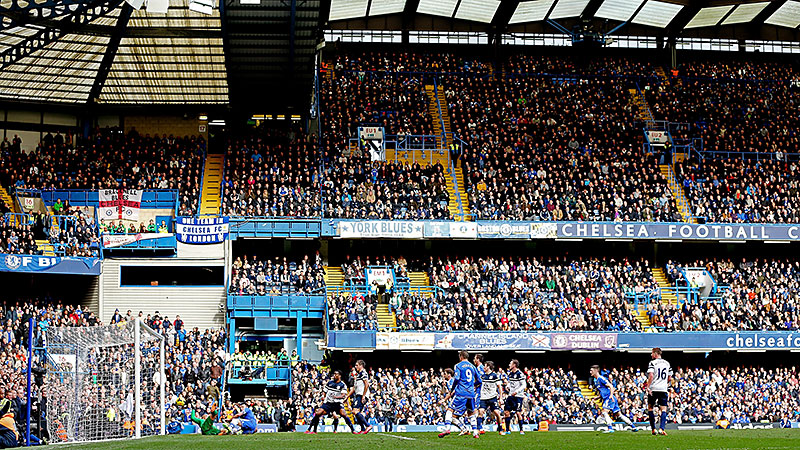 Brett Koremenos: After their loss to Spurs a couple of weeks ago, I had to face the harsh reality that my beloved Everton had pretty much kissed any chance of Champions League qualification good-bye. Perhaps that’s why John Terry’s extra-time goal that stole a point away from Everton this weekend barely fazed me. That’s not to say it wasn’t upsetting. Terry is soccer’s Antichrist, and witnessing him find the net caused me to free-fall into black depths of pure evil.

That loss to Chelsea dropped Everton to seventh in the table, where they would avoid the worst fate imaginable for a small club — Europa League qualification. So instead of letting that result ruin my entire day, I became almost immediately indifferent (if not sorta happy). This is a weird but altogether explainable feeling.

It’s become clear over past years that qualifying for Europe’s consolation bracket is a death sentence for almost any club striving to grow. The financial “reward” for Europa League qualification doesn’t offset the depth needed to compete in both that tournament and the Premier League without risking a noticeable drop-off in the latter. Just ask Swansea this season. Or Liverpool and Newcastle the year before. The only teams that have been able to move forward despite a continued presence in the Europa League are Chelsea, who have more money than God, and Spurs, a lone exception because the transfers of Luka Modric and Gareth Bale allowed them to buy approximately 80,000 new players to fill out their bench.

I can almost guarantee that qualifying for the Europa League next season would cause Everton to fall in the Premier League. Consider that the club has come close to nabbing the fourth and final Champions League spot in recent years — the place where the real game-changing money is — and the best way for Everton to move forward in future seasons, is to continue to move backward in the current one. Hence my apathy toward the loss to Chelsea.

An FA Cup run or European qualification every once in awhile is pretty much the highlight of your fandom as an Everton supporter, so maybe I should take what’s given to me and shut up. The Europa League does have some decent perks after all. I mean, how often do Swansea supporters get the opportunity to cheer for their side in a meaningful home fixture against a club like Napoli?

But like most fans, I just want the best for my club. I don’t really consider it a true privilege to watch my club take on Dhakldnlksfifivic City FC from Eastern Slovenia every Thursday early in the season. I want to cheer for wins and for those resulting points to mean my club is moving forward in the league that matters most, not into a position where they risk taking a step back.

Canary in the Coal Mine 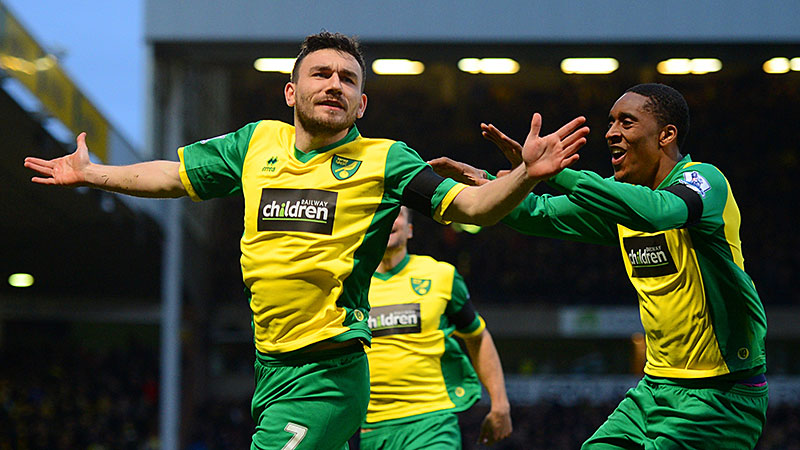 Snodgrass might sound like the color palette of Norwich City’s uniforms — and, well, it probably is — but he’s also the team’s best player. In Sunday’s game against Tottenham, “Snoddy,” as real people have actually called him in the past, scored the winner with a 50-yard off-ball run — one of those against-the-grain first touches that shifts the defense into just a friendly-enough shape — and a curled finish that didn’t leave the far post until the last moment. Considering the 26-year-old leads the Canaries in shots per game, too, it was a fitting kind of success. The goal came off a decent through ball from Bradley Johnson, sure, but it was Snoddgrass’s touch that created the chance for him to finish.

Despite creating more chances than Andrea Pirlo’s self-appointed heir, though, Snodgrass only has one actual assist this season. Even without counting goals scored against your own team, that’s less assists than Kolo “The Legend of Kolo Toure” Toure has this year. Part of that comes down to some Rust Cohle–ian uncertainty-is-the-only-certainty-type shit. Another bit of it stems from the incompetence of some of the guys he’s setting up. And the rest has something to do with the quality of the chances he’s creating. (Earlier this season, Stats Bomb looked at the number of expected goals per chance created, and that bumped Snodgrass down to around 10th — still higher than Mesut Ozil and Eden Hazard.) Snodgrass leads the league in accurate crosses, but as David Moyes learned when he encouraged his dog to run into a glass door 81 times in a row, those aren’t the easiest chances to convert.

Still, “Silva, Ozil, Suarez, Hazard, and Snodgrass” is a statistical quintet that exists, beautifully and absurdly. Snodgrass is a Pynchon character in a novel written by a different author. And as long as he keeps shooting and passing at such high rates, it’ll be a name that’s still worth saying. As Dirk Nowitzki put it:

Triangle Cheat Sheet: Jadeveon Clowney Impresses at the Combine (Sort of), and Saying Good-bye to the Olympics