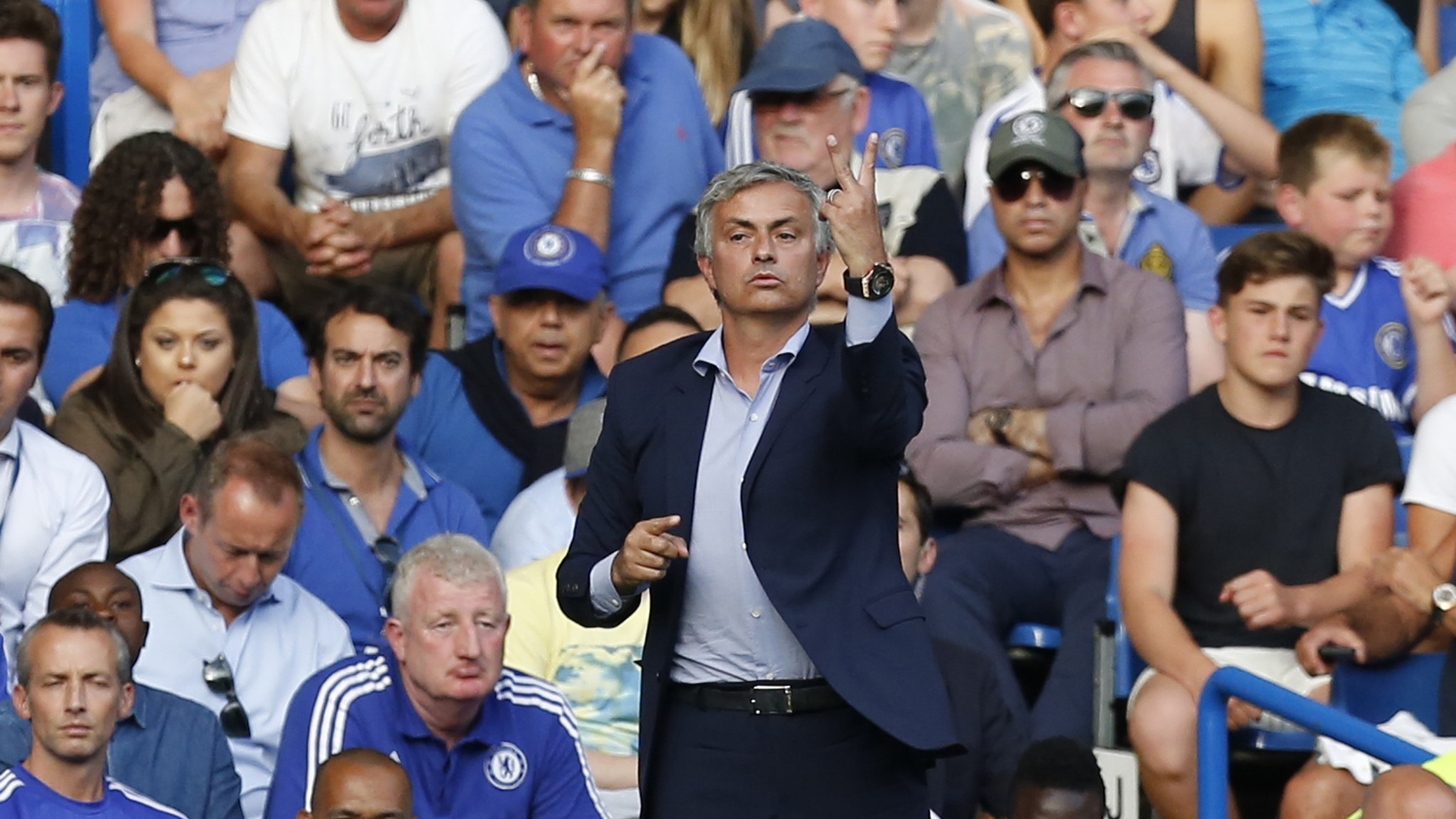 With the first round of Premier League games almost in the books, Leicester City sits in first place, Arsenal props up the table, and … Liverpool is in fifth. The point being: Beyond Merseyside, there’s almost nothing predictive about the standings or the individual performances from this past weekend. Do we care? And is that gonna stop us from making a couple of immediate assertions based on the most microscopic of sample sizes? Absolutely not.

The Year of Barkley

Ryan O’Hanlon: Toward the end of last season, Everton manager Roberto Martinez said, “It is difficult to find an English no. 10 because the upbringing is very, very different.”

Ross Barkley is only 21, but there’s already some suggestion that he’s a lost cause — an athletic, powerful meteor of a midfielder whose physical gifts will always exceed his on-field awareness. As Paul Riley wrote for Stats Bomb, “I’m not sure Barkley could consciously do anything on a football pitch if his life depended on it.”

A lot of very smart people hold this opinion, and, yes, watching Barkley try to play an incisive pass is like watching someone try to cut steel with a bar of soap. But as long as Everton’s strikers keep teeing him up at the top of the box, and as long as the Toffees keep playing against teams without competent defensive midfielders, and as long as the forces of the universe continue to align just so, Barkley’s lack of guile won’t matter all that much.

Chris Ryan: Wilfried Zaha is proof that life does not end when you leave a top-four club. His story is a pretty familiar one: A young star comes up with a smaller team, plays well, attracts scouts from Premier League playground bullies. The big club makes an offer, and even though the young player is already getting consistent playing time and is beloved by the small club’s fan base, he jumps at the opportunity to run out for the home team at Old Trafford, Stamford Bridge, Etihad Stadium, Anfield, or White Hart Lane. Maybe he gets that chance. Maybe there’s a difficult adjustment period or a change of manager and he doesn’t click with the new boss.

This was Zaha’s story. He was poached by Sir Alex Ferguson from Crystal Palace, but he barely played for Ferguson, and instead was loaned back to Palace for the season. When he got to United last summer, he wasn’t the player David Moyes wanted, and Zaha was loaned to Cardiff. Finally, in the midseason window, he moved back to Palace on a permanent deal. Ordinarily, that would be that. You’d see him on Saturday and try to remember what circuitous route brought him back to his original club.

Here’s the thing, though: Zaha is still really good. And he’s still only 22. And what we got to see on Saturday, when Crystal Palace crushed Norwich, 3-1, was Wilfried Zaha being the man. Is he good enough to play on the wing for Manchester United? Apparently not. But he is good enough to be option A for Palace, and he looks like he’s thriving in that role.

You can never begrudge someone the opportunity to triple their salary, but Zaha’s story — and Scott Sinclair’s, and Andy Carroll’s, and Jack Rodwell’s — should be instructive to players like West Ham’s Reece Oxford. The money may be greener, but the grass isn’t always.

The Mark of a Champion

O’Hanlon: As part of the soccer1 media’s ongoing effort to prevent itself from coming to terms with the idea that individual games tend to be decided by random occurrences that often don’t necessarily reflect the majority of what’s happened over the past 90 minutes, there follows the idea that “champions just find a way to win close games.” You’ve heard it, specifically, whenever a team that’s managed by Mourinho or Sir Alex Ferguson plays noticeably poorly but then scores a late goal that could reasonably be described as “out of nowhere.” They win these games because they are champions — not the other way around.

So, rather than suggesting that yesterday Liverpool played an overwhelmingly mediocre game against Stoke City that evoked both the waywardness and banality of a piece of cardboard floating in a soft wind, I present this:

One match and one Coutinho goal in, Liverpool look a whole lot like champions.

We Get the Jose We Deserve

The incident between Mourinho and Eva.. Something is not quite right at Chelsea these days. pic.twitter.com/zj6vRN9Zp5

Ryan: Not so funny anymore, is he? That’s Jose Mourinho, losing it at his own medical staff as they ran onto the field to tend to Eden Hazard toward the end of Chelsea’s draw with Swansea. Never mind that Swansea looked like a better team for large swaths of the game, or that Mourinho’s team looked like it has looked for most of the preseason: tired. Mourinho was screaming at the team’s phsyio, Eva Carneiro. If a player receives treatment from team doctors, he has to leave the field, meaning Chelsea was down to nine men at a crucial point in the game.2 This was unacceptable to Chelsea’s manager, who said he thought Hazard was just tired.

Mourinho would go on to criticize Carneiro in an on-camera interview after the match. This has played … poorly. Carneiro is beloved by Chelsea fans, is one of the few examples of women working at the top of the men’s game, and has reportedly suffered sexist abuse from opposing fans. She also has to assess whether or not serial divers like Hazard, Diego Costa, and Cesc Fabregas are actually hurt or just rolling around on the ground for a spell.

Mourinho manages on a knife’s edge, and sometimes you’re going to get cut. This has always been the case. It might seem like a bit, but this is a guy who looks at his team like it’s a gang and looks at soccer like it’s a brawl, literally — anything can be used, anyone can be discarded or thrown up for cover, nothing is out of bounds. He will never blame a player, publicly. It’s always someone else’s fault, and everyone is fair game. A few weeks ago, Mourinho drew fire for insulting fellow manager Rafa Benitez’s weight and his wife. Now we have this Carneiro situation. He is the greatest manager in the world and one of the most charismatic people in professional sports. Just don’t bother trying to like him. This isn’t a heel turn from Jose Mourinho. He has always been a heel.

You Gotta Go Down If You Wanna Go Up

O’Hanlon: A couple of days ago, Arsenal was the “sexy” pick to win the Premier League. You know what’s even sexier than that? Getting relegated.

Hear me out: Despite all the preseason hubbub, Arsene Wenger’s team has added only one true first-team player, and it’s still not quite clear he knows what to do without the Mourinho force field emanating out from his penalty box. Players are going to get hurt, and Arsenal’s depth is bound to be stretched to Mathieu Flamini–playing-important-minutes limits. You know how to prevent that? Punt on the Premier League.

Trust me. Just do it, Wenger. After the 2-0 loss to West Ham, you’re already in last. And you’ve already been a trailblazer with the overarching philosophy that you’ve instilled at such a big club, with your revolutionary dietary requirements and your dope outerwear, so now it’s time to turn another truism on its head. We always hear about how playing in Europe can adversely affect a team’s domestic form, but why be so Anglocentric? Forget about the Premier League and put all your energy toward the Champions League. Play the kids in the EPL and the studs in the UCL. You’ve already won three league titles. It’s time to finally conquer Europe.