Who Needs Goals? Chelsea and Arsenal Turn a Scoreless Draw Into a Referendum on Head Injuries, Refereeing, and Philosophy 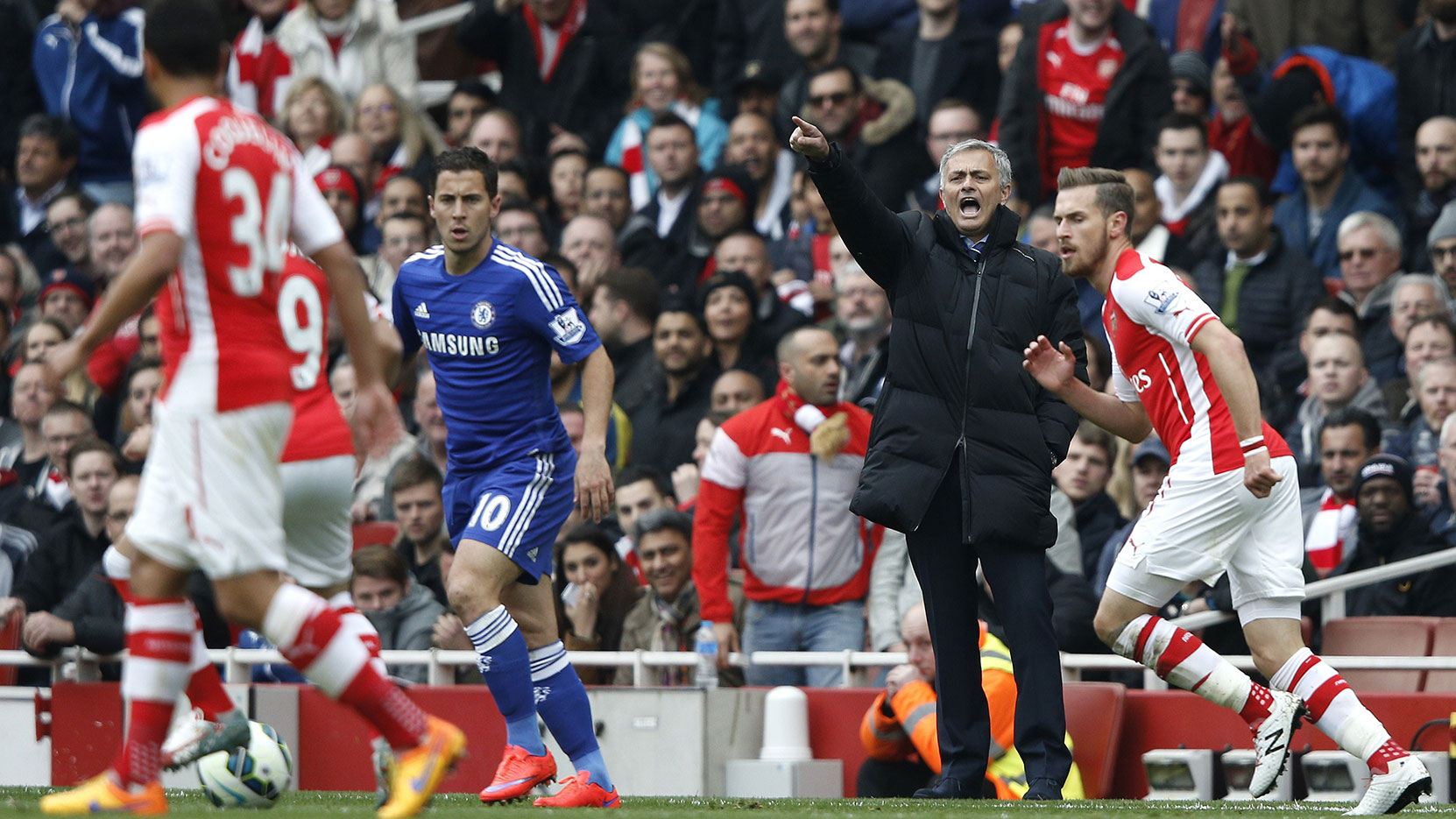 Realistically, even if Arsenal had beaten Chelsea on Sunday, they weren’t going to catch the presumptive champs. A seven-point lead with five matches remaining would’ve required a massive collapse from Chelsea. And as we saw yesterday, “collapses” aren’t José Mourinho’s kind of thing.

Still this is Mourinho’s Chelsea and Arsène Wenger’s Arsenal we’re talking about, so even a scoreless draw in a meaningless game can’t keep us from finding things to argue about. Here are the three biggest story lines from yesterday’s match.

Let’s deal with the serious one first. Slowly, very slowly, the soccer world has at least begun to recognize that, yes, in a sport where people’s heads frequently collide, concussions do in fact exist.

In the 16th minute, Chelsea midfielder/makeshift striker Oscar was driven into the ground by Arsenal keeper David Ospina with all the force of Kam Chancellor laying out a wide receiver. Despite the Premier League having at least a nominal concussion protocol in place, Oscar played on until halftime, when he was finally shipped off to the hospital. So, here we have either a useless protocol, a protocol that isn’t followed, or, more likely, both. This isn’t a Chelsea issue; it’s a league and culture issue.

Oscar’s injury is a reminder of how far soccer has to go to get proper treatment done on even the most obvious of cases. If he’s playing until halftime after taking a hit that left him twitching on the ground, then what about the more subtle, borderline head injuries that are happening all the time?

At one point, it was possible to believe that a lack of knowledge was preventing progress on traumatic brain injuries. Of course, now we have the information about what concussions do to people. And the first steps toward dealing with the problem should be easy: have independent doctors examine the players and give teams an extra substitution for head injuries. But frankly, nobody in the game cares enough about the well-being of the players for any of that to happen. 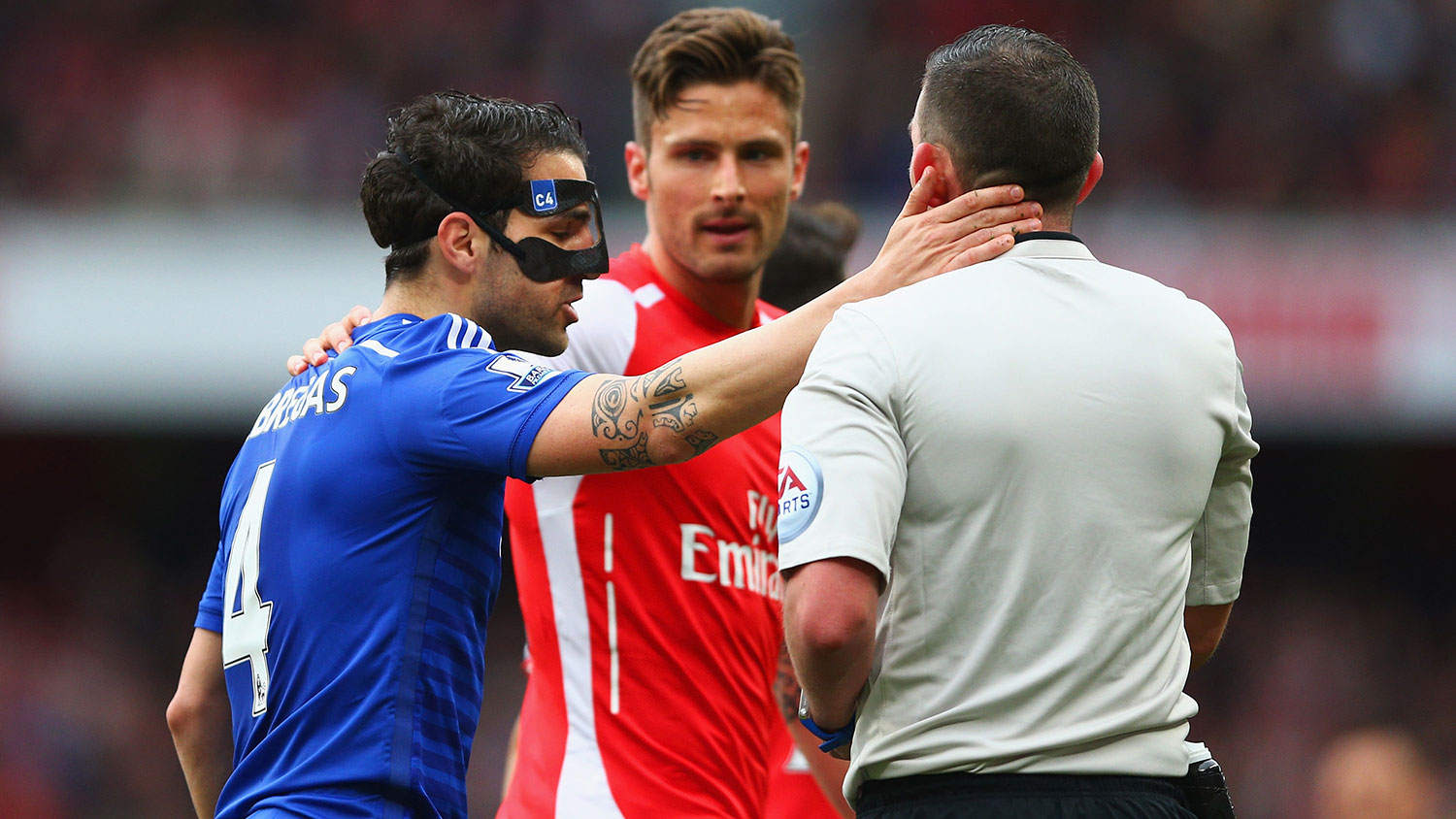 OK, now let’s all laugh at referee Michael Oliver. When Ospina laid out Oscar, Oliver swallowed his whistle. Should Ospina have seen red? That’s debatable. Oscar’s header got cleared off the line, so the uncalled foul probably didn’t constitute the denial of a goal-scoring opportunity, but it was certainly a foul.1 So the question then becomes, was Ospina’s challenge simply reckless or did he use excessive force? At least, that’s how FIFA’s rules of the game delineate between a yellow-card and red-card offense. If you can definitively locate the line between those two degrees, send your job applications to Howard Webb.

The reality is that refereeing is hard, and the rule book, which is basically one big shrug emoji, doesn’t make things any easier. Take these two first-half incidents: Is this a foul by Santi Cazorla on Cesc Fabregas? Is this a hand ball by Gary Cahill? Good luck finding a rule in the Laws of the Game that will tell you anything definitive, because they don’t exist. Watch those replays a hundred times and you can still come up with arguments on either side, depending on your — or, more importantly, the referee’s — judgment.

If and when instant replay comes along, this is still going to be a problem. As American sports have aggressively begun to implement the technology, it hasn’t been used in areas that are fundamentally judgment calls. NFL coaches can’t challenge a holding call, but did Dez Bryant fulfill the seemingly 653 different steps a wide receiver must go through to make a catch official? Send it upstairs. With replay in the NFL, arguments often boil down to whether a rule that is enforced is a good rule, not whether a rule was enforced correctly. However, most of soccer’s rules are vaguely defined at best, leaving a tremendous amount of judgment in the referee’s hands. Was a foul careless or reckless? Did a player mean to handle a ball, or do it accidentally? Those are all incidents that instant replay can’t solve without having a more codified rule book to appeal to.

Now, that doesn’t mean that technology can’t help. Offside calls, off-ball incidents beyond the referee’s sight, blatantly missed fouls like the one Ospina committed — having some form of replay would help in all of those situations. But even with instant replay, the close calls — the ones we never stop arguing about — are simply unsolvable under the current rules.

As the two teams walked off the field after the final whistle, you could hear Arsenal fans chanting, “Boring, boring Chelsea.” Of course, the implication here is that all Chelsea does is defend and that Arsenal are the moral victors because they play the right, noble, virtuous way, which is beloved by God.

The bellowing of the Arsenal fans conveniently ignores that defensive Chelsea created the best two opportunities of the day: the one that KO’d Oscar and a gorgeous ball by Willian to set up Ramires. It ignores that the first half of the game was decidedly open with chances for both sides. It ignores that Arsenal themselves chose to defend against Chelsea by dropping men behind the ball in their own area and not by aggressively pressing to win the ball back. It ignores that Arsenal fans hailed the way Wenger battened down the hatches in their win against Manchester City earlier this season. It ignores that one of the reasons for Arsenal’s climb up the table this year is that they stopped naively conceding goal after goal to the league’s other top teams. And it ignores that boring, playing-for-a-draw, defensive Chelsea both won more games and scored more goals than Arsenal.

Sometimes, criticizing a team for being defensive is accurate. But Arsenal fans chastising Chelsea — whether for their performance over the course of a game or the entire season — doesn’t make much sense. Chelsea have been better at scoring goals this season than Arsenal,  and that is a large part of why they’re about to win the title. As Mourinho said after the game: “Boring? I think boring is 10 years without a title. That’s boring.”

I wonder if Arsenal fans will ignore that, too.

This post originally referred to Gary Cahill as Tim Cahill; we regret the error.