Prematurely Evaluating the Situations in Which Newly Drafted Quarterbacks Find Themselves 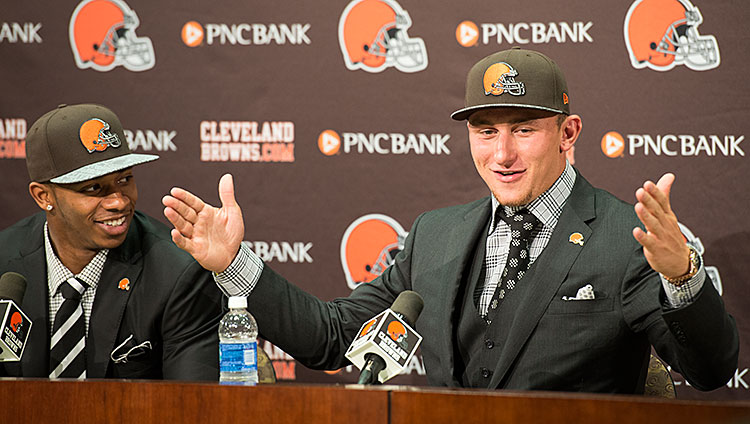 In the 2014 NFL draft, 14 quarterbacks were selected. The first was Central Florida’s Blake Bortles, taken third overall by the Jaguars; the last was Southern Methodist’s Garrett Gilbert, who went 214th overall to the Rams. The only position with fewer players selected was tight end, unless you’d like to count kicker or punter, in which case you’re just being obnoxious.

If you wanted, you could memorize the names of every quarterback in the NFL; there’s just under 100 of them. It would be tricky, but think of how many Pokémon you can still name off the top of your head — you could do it. Each of these quarterbacks is the star of his own little soap opera. I am interested in these soaps. They’re our soaps. Sports soaps. Do not call the house when we’re watching our soaps.

I’m not saying you shouldn’t be jealous of Derek Carr: He will be making a healthy amount of money playing quarterback this year; he is also famous despite having terrible facial hair. But I don’t think you should be jealous of anyone, because you’re a beautiful creature on your own, and what does Derek Carr have that you don’t, honestly?

And the only way you could make Derek Carr’s newly minted NFL situation more awkward would be if you replaced him with Zooey Deschanel. He joins a Raiders franchise that hasn’t had a good quarterback since Rich Gannon was telling his teammates how much he hated them. He’ll be competing for the top job with Matt Schaub, the league’s Grumpy Cat, and Matt McGloin, who started games last year despite having the name of a Thomas Pynchon character. If Carr succeeds, it’ll be a further blemish on his older brother David, who, despite having a long and lucrative career in professional football, will forever be treated like a failed McDonald’s menu item. These streets are emotional for Derek Carr.

On the other hand, everything’s coming up Garoppolo. If you’re a talented guy who spent the last four seasons at Eastern Illinois, feasting on the Google cafeteria that is the Ohio Valley Conference, then being paid handsomely to back up Tom Brady for two to four years is your best-case scenario. Garoppolo gets all the luxury that comes with a billion-dollar organization’s desperate desire for success and none of the skull-imploding pressure this entails when you actually have to win football games.

By all accounts, Garoppolo has the personality of a priest. He’s about to enter an environment of uncompromising love and support. Tom Brady will give him free Uggs. Bill Belichick might even talk to him. Ryan Mallett will do horrible things to a Garoppolo voodoo doll at night, but we all know voodoo takes decades of practice to utilize, and Mallett just hasn’t put in the time. For Jimmy Garoppolo, the next few years will be one long version of a superhero-movie training montage. And then Brady will retire, or, even worse, he’ll get hurt, and with dizzying abruptness Garoppolo will go from being a coddled and well-pruned labor of love to the most scrutinized athlete in the world. Sports are fun!

Logan Thomas is a pinup quarterback. Now he just needs to learn how to play the position. Fortunately, he enters a situation that, if not quite as perfect as Garoppolo’s, is still close to ideal: Thomas’s coach is Bruce Arians, one of the better QB minds in the game, and Carson Palmer can hold the wheel for a bit while Thomas puts on his pants and shaves in the rearview mirror. But where Garoppolo has all the stability in the world, Thomas wasn’t even particularly good in college. And Palmer’s not exactly Tom Brady. In fact, he’s Carson Palmer, which, circa 2014, means lots of turnovers and a constant look of cosmic confusion.

There’s this classic narrative device for starting a story: The protagonist is recuperating from injury or a cyborg-y enhancement when the facility he’s resting in gets raided by THE ENEMY. When this happens, the protagonist must then defend HQ despite being in a weird shoulder bandage that no human being has ever worn in real life. That’s where Thomas will be, narratively, for the next two or three years.

Here’s the problem with playing quarterback at the University of Alabama, the trade-off for all those championships and getting negged by Nick Saban: You are not ready to play quarterback in the NFL. In the pros, the quarterback is almost always the most important man on his roster, and if he’s not, it’s to the detriment of the team. At Alabama, McCarron was the football equivalent of the vice-president, his function mostly ceremonial. He did a wonderful job. But every player on his team was better than every one of their counterparts on the other team. In the pros, if he ever wins a starting job, this will not be the case.

The weird thing about McCarron going to the Bengals is that he could, conceivably, be in that spot. We as a nation are slowly coming to terms with the fact that Andy Dalton is not only less than the Pro Bowl–caliber quarterback he was expected to be — he’s actually been average at best, with an alarming knack for throwing interceptions and incompletions. Despite having the best receiver in the league not named Calvin Johnson, Dalton ranked 16th in Football Outsiders’ DYAR rankings and 18th in DVOA, which both take into account the quality of his opponents. If he doesn’t perform at a top-10 level in 2014, the discussion in Cincy will turn to how the team can gracefully part with Dalton rather than give him the huge contract extension he expects, particularly now that it’s becoming clear just how huge of an albatross similar extensions for Joe Flacco and Matt Stafford have been for their teams’ cap flexibility.

That doesn’t guarantee a job for McCarron. As a fifth-round pick, he really isn’t guaranteed anything. McCarron is going to spend the next year lurking around the shadows of the Bengals’ facility. He’ll sleep in cabinets in the kitchen. He’ll lick the wrappers of discarded Clif Bars for energy. He’ll study stolen playbooks by cell-phone light as he soaks his feet after everyone else has left for the day. But if Dalton fails, AJ McCarron will be there, shirtless, his crucifix glinting in the reflected glow of Dalton’s hair. The real crucifix, that is. The tattooed crucifix glows with the fire from within.

Rookie quarterbacks’ lives are characterized by uncertainty, indecision, the rank smell of failure a constant presence. Nothing’s guaranteed. The quarterback needs to prove himself to his city, earn his right to be adored and admired, stake his right to a place in the pros.

None of this is true in Cleveland. Johnny Manziel is already God.