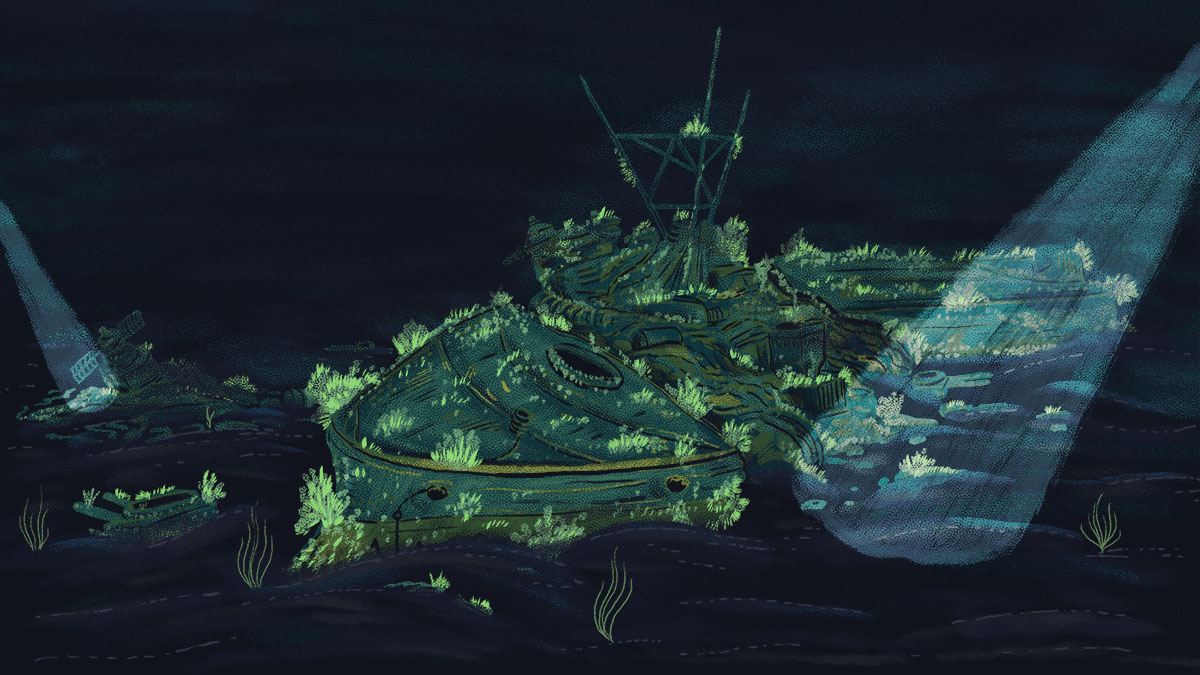 1. A Brief History of the Super Battleship Musashi; or, the Best-Laid 70,000-Ton Warships Often Go Awry

Until last week, when the billionaire Paul Allen began tweeting images of deep-sea wreckage — a coral-encrusted anchor, a green valve hairy with algae — the annals of vanished ships contained no entry more mysterious than that of the Musashi, a massive Japanese battleship sunk off the Philippines toward the end of World War II. To call Musashi massive, actually, doesn’t begin to do it justice. It was, and remains, one of the largest battleships ever launched — 70,000 tons of water displaced, with a crew of more than two thousand. Its nine 18.1-inch guns, the largest caliber ever mounted on a ship, were designed to fire 3,000-pound shells at a range of more than 26 miles. The guns and their huge turrets were constructed in the arsenal at Kure, near Hiroshima; before they could be installed on the Musashi, the Japanese Navy had to build a second ship just to transport them to Nagasaki, where the behemoth was being built.

The Musashi was the second, and wound up being the last, of the Yamato class of battleships, oceanic fortresses dreamed up in the 1930s to give Japan ascendancy at sea. To understand what these ships represented, you have to appreciate the fantastic tension surrounding Japan during the buildup to WWII. The country had become an industrial power almost overnight, had beaten Russia in a war at a time when no one thought an Asian nation could compete with a European country. It was bristling with aggressive confidence and gripped by a furious, expansionist nationalism; it was also surging with resentment toward the Western powers that still treated it as a backwater. When the League of Nations rebuked Japan for its 1931 invasion of China, the empire withdrew from the organization in defiance.

For its Navy, Japan’s rejection of the international community was a liberation. Previously bound by treaties designed to enforce American and British naval superiority, the empire was now free to challenge its soon-to-be enemies on its own terms. Knowing they couldn’t rival the U.S. and Great Britain for sheer numbers, Japanese planners envisioned a class of battleships so vast, so heavily armed and armored, that they could crush multiple Allied ships simultaneously. More than just a tactical weapon, the Yamato class would be the supreme symbol of Japan’s unleashed power and ambition: They would be talismans. After they were launched, many Japanese believed it would be impossible for the empire to lose the war as long as they were afloat.

War and the sea both love ironies, and the story of the Musashi contains at least two that could keep you up at night. The first is that these ultimate battleships were conceived at almost the exact moment when the rise of air power essentially negated the tactical advantage any battleship, even the biggest, could confer — something Japan itself realized after the attack on Pearl Harbor,1 before the Musashi was even commissioned. With what you have to imagine was a pretty grim expression, the naval authorities canceled their plans to build more super battleships. And both the Musashi and its sister ship, the Yamato, came to horrific ends. The Yamato ended its life trying unsuccessfully to beach itself during the defense of Okinawa.2 The Musashi went down in an American aerial assault during the Battle of Leyte Gulf, the largest naval engagement ever.

And then — nothing. The wreckage was never found. The remains of the Yamato were discovered in the South China Sea in 1984, but the Musashi, despite sinking in a well-documented battle and in front of thousands of witnesses,3 eluded every search. It seemed to have just vanished. Which is the second of its two lethal ironies: What humans imagined as an ocean-dominating colossus turned out to be, to the ocean, insignificant, something small enough to be casually misplaced.

Or it did until last week, when Paul Allen started tweeting. History seems to take a weird delight in undermining its own solemn lessons. Lost things slyly turn up, decades or centuries later: the city of Troy, a Viking hoard, a lost temple. Just this month, an entire civilization. Last year, the HMS Erebus, one of the most puzzling ghosts in the long history of maritime disappearances, was found in Arctic waters after 169 years. There it was, when you least expected it.

The eventual un-solemn discovery of the Musashi required a history-buff billionaire, his yacht, some high-tech toys, and a ton of archival research. If you have any respect for the dignity of a great mystery, one of the most reassuring aspects of this story is that it wasn’t just a case of pointing the wealthy-dilettante tricorder at the water and getting pinged by a flashing green dot. Allen’s team appears to have spent years collating primary sources to pinpoint likely locations for the wreckage; 70 percent of all archaeology is done in the library, as this guy used to say.

Allen, in case you don’t keep up with Oligarchs Monthly, is one of the cofounders of Microsoft. He owns the Seattle Seahawks and the Portland Trail Blazers. The ship he used to discover the Musashi — the mouse pointer, you might say, with which he un-minimized the window of lost history — was his personal yacht, the M.Y. Octopus, which his website bills as “one of the world’s largest and most recognizable yachts.” I didn’t know this, but apparently one of the attractions of being Allen is that you get to sail around the world in your super-yacht having Jules Verne–ish research escapades. It was the Octopus from which James Cameron launched his seven-hour solo journey to the bottom of the Mariana Trench, the earth’s deepest point, in 2012.4 I don’t mean to mock this. You could say there’s something a little vain and Redditor-heroic about this type of rich male adventure-exploit, but I don’t know. The world is not so full of delightful things that I’m going to turn my nose up at a weird billionaire roaming the seas solving mysteries. Or anyway, I can think of worse ways to spend a Tuesday.

Allen’s dad fought in WWII. Allen is an enthusiast (why wouldn’t you be) of both military history and shipwrecks. To locate the Musashi, his team isolated a search area of about 360 square nautical miles around a submerged volcanic ridge in the Sibuyan Sea. The extreme variation in topography created by the ridge made sonar impractical, so the team explored the area with an unmanned submersible launched from the Octopus. Assuming that a ship weighing many thousands of tons would slide down the ridge rather than perching on top of it, they concentrated on the deep places. On just its third dive, the submersible found what turned out to be the remains of the Musashi, more than 3,000 feet below the surface.

Last night, Allen’s website livestreamed a tour of the shipwreck. You can watch it here if you’re interested, but odds are you’ve probably seen something like it. The greenish beam of the submersible’s spotlight sliding over rust-speckled metal; strange, soft fronds waving from disintegrating chains; on all sides, unbelievable shadow. There was commentary to go with the footage, dry and intermittent — “we’re gonna move up the anchor chain and we’ll follow that aft”; “you can see that the bow’s resting at quite a severe angle.” There were also periods of silence, during which all you could hear was breathing. And it was possible, because shipwreck footage is by nature sort of abstract, to drift away, somewhat, from the specificity of the ruins, to feel that you were looking at “a shipwreck” rather than at this historically definite and unique object that played an essential role in so many people’s lives. But that is what you were looking at. This was the Musashi, which was constructed in such secrecy that the Japanese government built a 400-ton camouflage net to keep the Americans from spying. These were the guns that had to be transported to Nagasaki on a purpose-built freighter; this was a place where the Emperor Hirohito walked when he visited the ship in 1943, where hundreds of officers and enlisted men spent their days. Actual pilots dive-bombed these decks. Launched torpedoes into them. As with a lot of historical footage that’s streamable online, the effect of this was spine-tingling — I mean thrilling and a little disturbing, in ways that are hard to tease apart. It’s strange to be so effortlessly close to something so remote; it’s hard to say in what sense that closeness is meaningful. I got up in the middle to get a banana from the kitchen; this footage was being beamed to my laptop from space. How do you think about that?

Afterward, we got a little glimpse of the Octopus, a rundown of some of the fancier kit, which was about as boring and cool as you’d think. Push this, go here. It was hard not to draw a line between the yacht, this triumphant little marvel of the sea, and the smashed god a kilometer beneath it. One was the result of a capitalist billionaire’s childhood fascination with Jacques Cousteau, one was the symbol of an empire’s pride and its fall. I have no idea what that conjunction means. It doesn’t mean anything, except that the story of the Musashi went about as far afield as possible from the intentions of the people who began it. Things don’t work out the way you expect, and then they come back in a context you couldn’t have imagined. I guess that’s history.