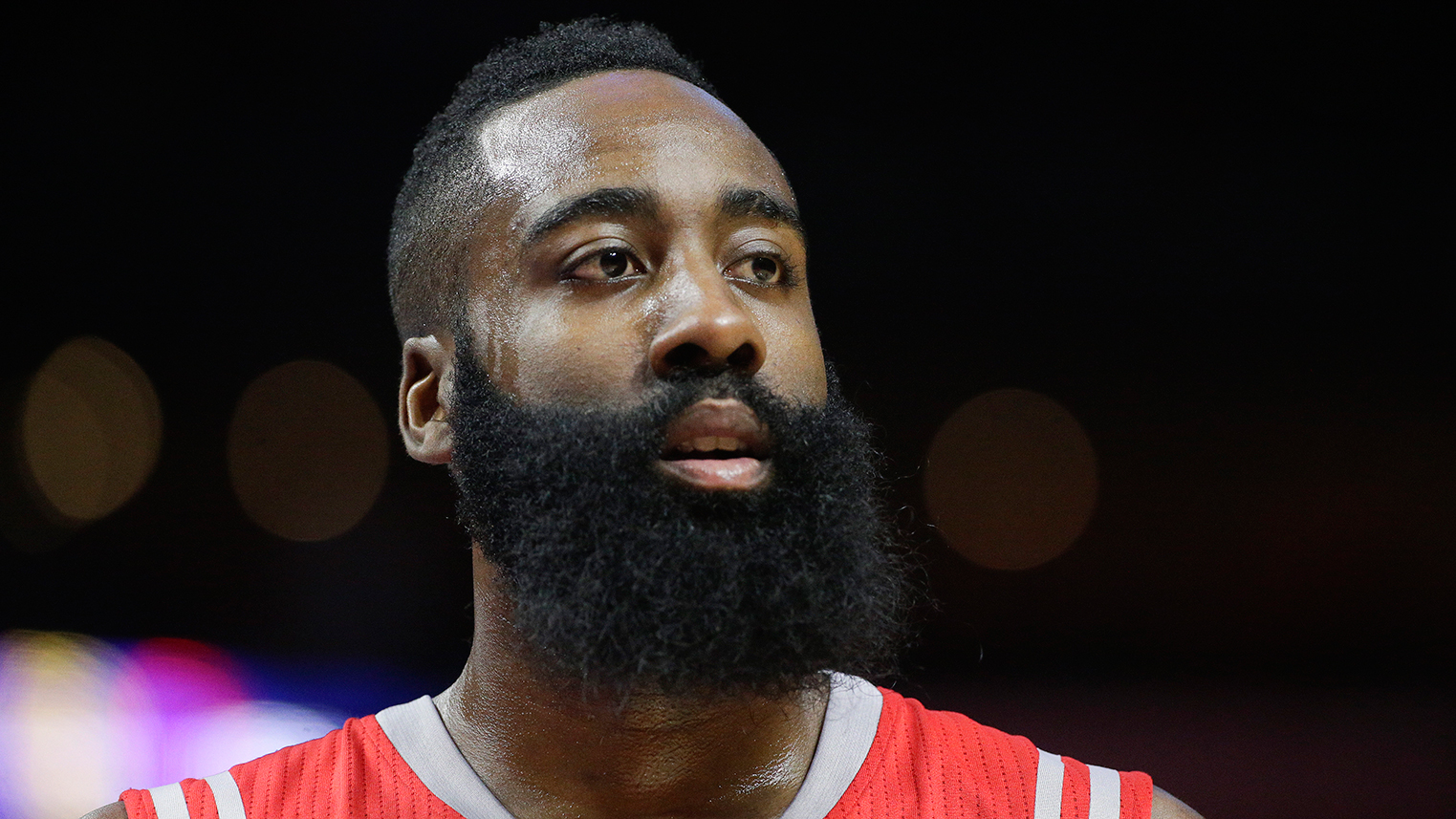 Look, I didn’t set out to join the Church of Harden, but here I am paging through the hymnal in the front pew again. And to be honest, I feel right at home. My latest obsession is the Book of Assists, Chapter 3. By a wide margin, James Harden leads the league in assists that lead to 3s.

The character of his 3 assists ranges from ho-hum to mind-bending. As I wrote a few months ago, Harden is the perfect player for the Rockets, whose obsession with 3s is well-documented. He is the perfect person to run their offense, and that compatibility is best illustrated with a few recent 3-point assists he made to Trevor Ariza.

At first glance, these plays look pretty pedestrian. But upon further inspection, you can see the Holy Mountain, the angel with four faces, the unknown rider, the wheel of life, the Rock of Gibraltar, and the origin of man. Or maybe that’s just me, but bear with me here.

Let’s start with an example from a Bulls-Rockets game. It starts simple enough, with Harden dribbling into a blasé Josh Smith ball screen. 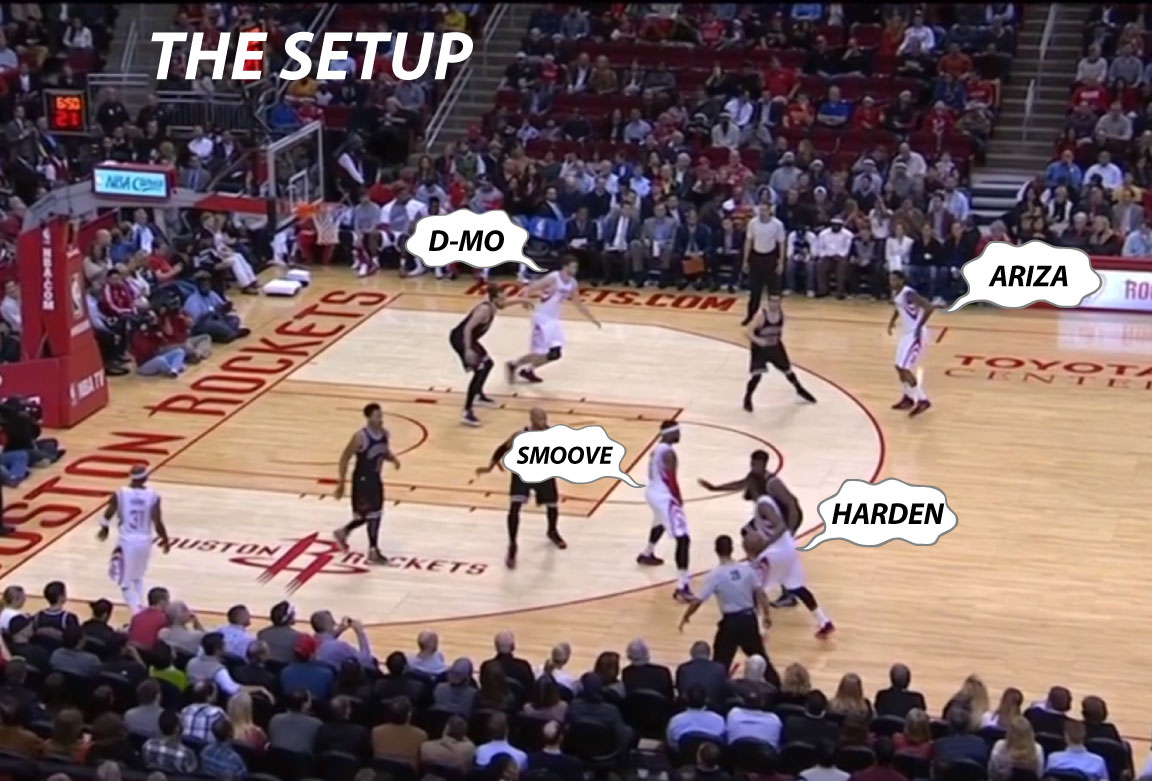 As soon as Smith picks Jimmy Butler, the insanity starts. Harden nonchalantly tosses a looping no-look pass across the width of the court. The pass will land in the hands of an open 3-point shooter. 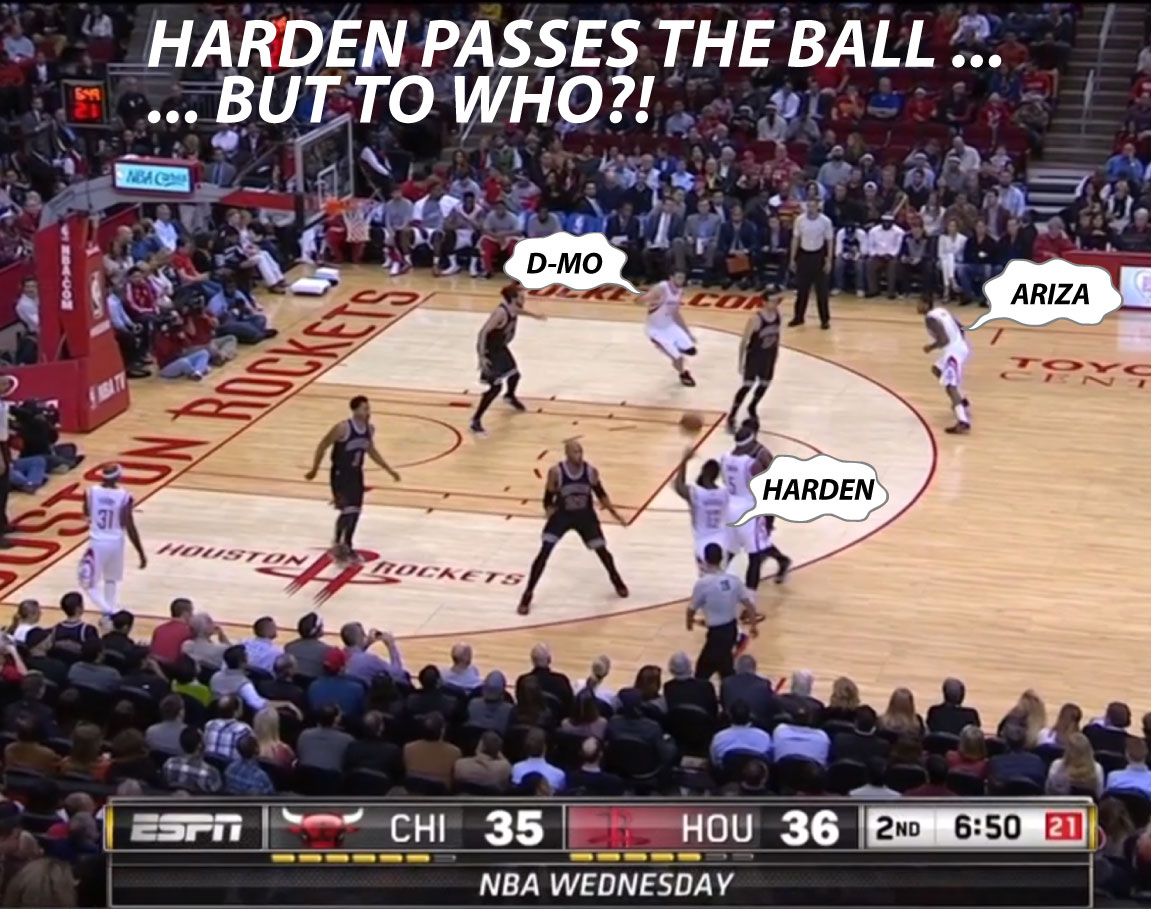 Here’s the crazy thing. As the flight path of Harden’s pass begins to crystallize, the play’s key weakside actions have barely even begun. This is akin to a quarterback receiving the snap and immediately lobbing the ball downfield. It’s an exercise in faith and a proud demonstration of tactical confidence. The soothsaying bearded man knows what’s going to happen before you do. He’s NBA Nostradamus. 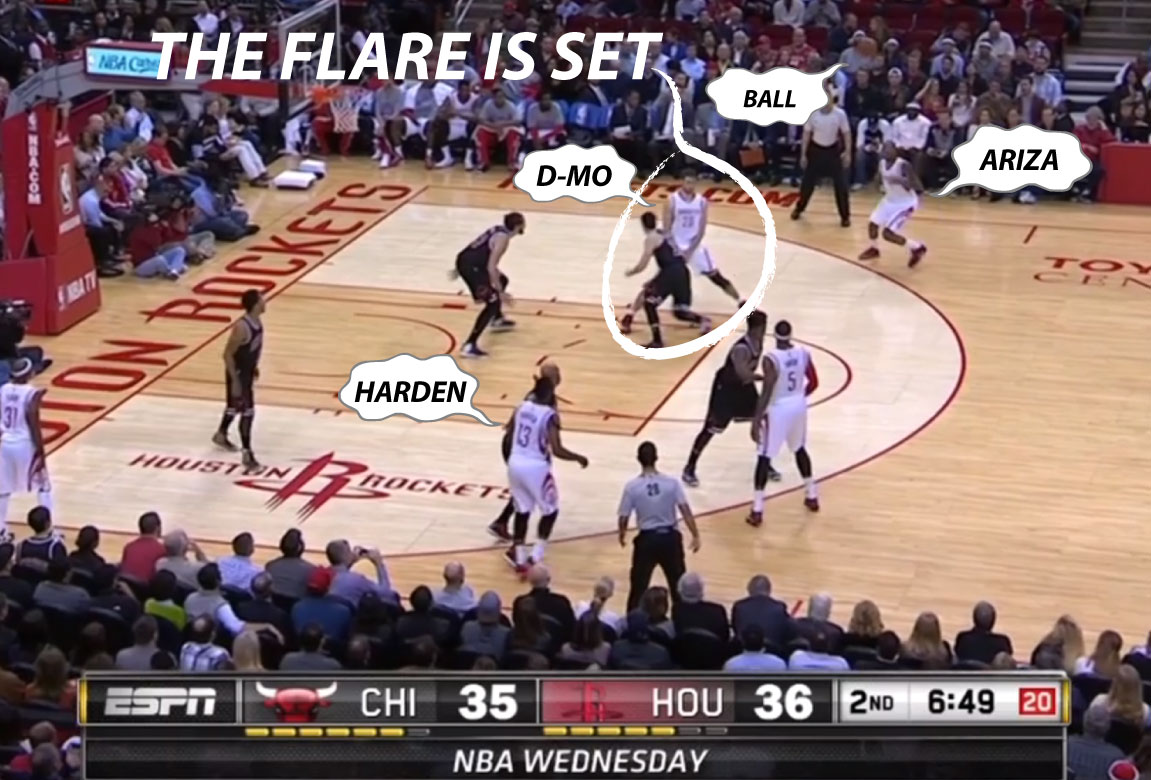 Just as Harden’s pass crosses the middle of the court, Donatas Motiejunas (D-MO) sets a flare screen that takes Ariza’s defender, Kirk Hinrich, out of the play. The ball descends softly into Ariza’s hands, and the rest is history. It’s breathtaking in real time.

Look one more time at the shape of the weak side the moment Harden releases this pass. If you look closely, a piece of tumbleweed blows on by — nothing’s stirring. By the time that pass gets to Ariza, he is so wide open that he has enough time to take a short dribble, perfect his shooting stance, and rise up for an uncontested 3, which unsurprisingly finds the bottom of the net.

Lest you think this was not the plan, here’s another example from December 13 against Denver:

This no-look, blind-faith, angle-flare masterpiece is my new favorite play in the NBA. It’s brilliant on many levels, but the key is that it perfectly exploits the outrageous amounts of defensive attention that opponents are giving Harden. These plays represent a maturity both in Harden’s game and the Rockets offense. As Harden the scorer has become increasingly unguardable, defenses have naturally reacted by throwing more and more resources at him. Harden and the Rockets are countering by turning this imbalanced defensive attention into open 3s for his teammates on the weak side. His willful cooperation in this exchange has elevated the overall functionality of the entire Rockets offense.

Here’s one more example from a recent game against Detroit. 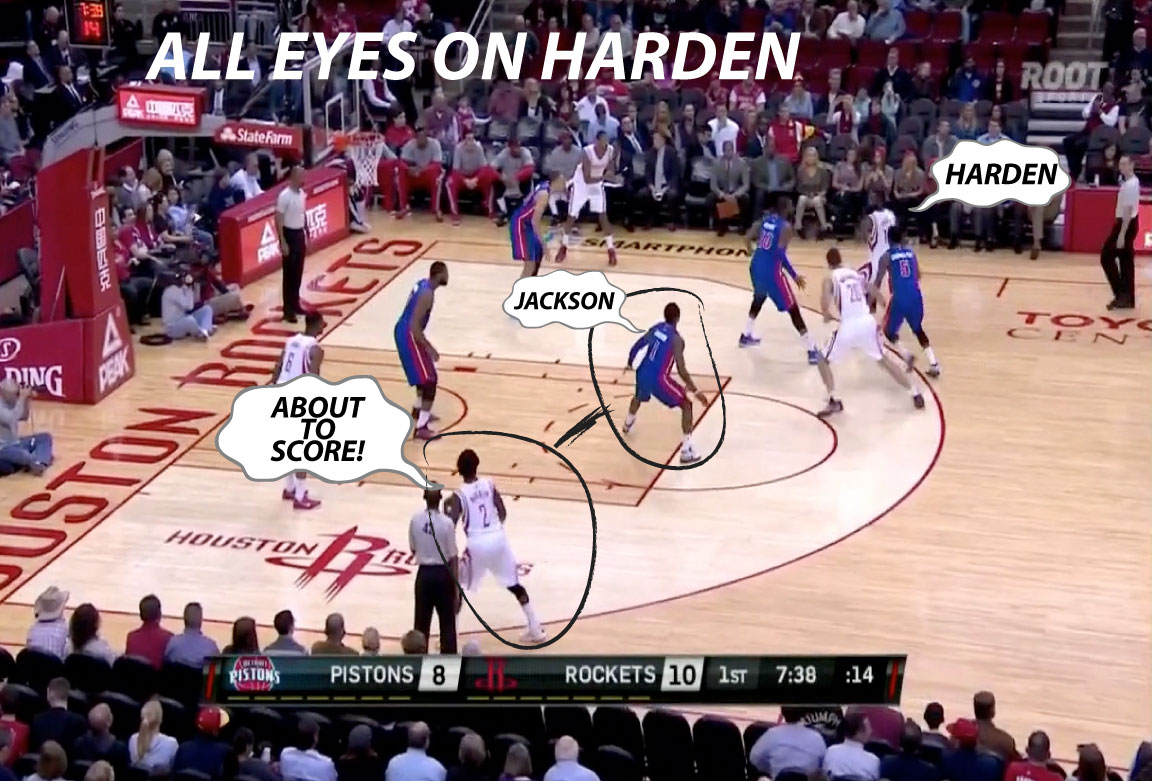 I’m no body language expert, but Reggie Jackson, standing at the nail here, has assumed the heightened-awareness pose of an on-ball perimeter defender even though he’s 14 feet away from the ball, supposedly defending Patrick Beverley. In a related story, he’s about to get burned.

Harden is obviously in the midst of an MVP-caliber season. Since arriving in Houston, he’s exhibited huge growth as a player, but I think it’s fair to say that, along with his defensive strides, his ability to create shots for his teammates is among the most important additions to his game. Suddenly he’s doing things — both aesthetically and statistically — that nobody else in the league is doing, or even capable of doing. You don’t have to love it, but the closer you look, the harder it is to resist the immaculate divinity of our bearded prophet.