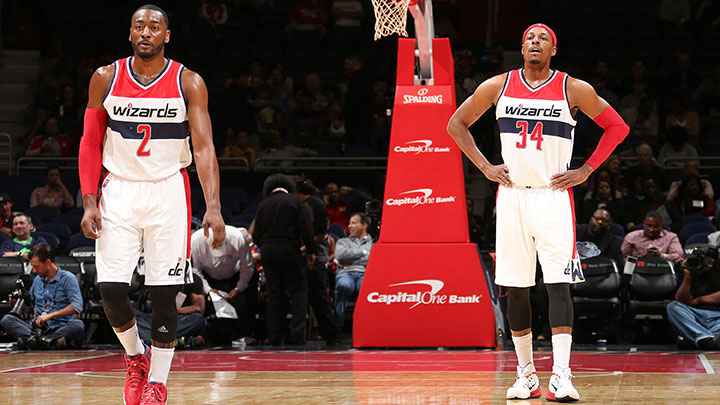 You probably think the Washington Wizards are a young, up-and-coming team. After all, All-Star point guard John Wall (24 years old), third-year shooting guard Bradley Beal (21), and sophomore forward Otto Porter (21) are ascendant players yet to hit their primes. But while the team’s fortunes may be rising along with the neophytes, look anywhere else on the roster, and all you’ll see are savvy, experienced veterans.

The Wizards are tied with the Cavaliers with a league-high six players — Paul Pierce, Andre Miller, Nene, Drew Gooden, Rasual Butler, and Kris Humphries — who have been in the NBA for 10 years or more. The team’s average age is 29.3 years, and their minutes-weighted age of 29.1 years so far this season makes the Wiz the sixth-oldest team in the league.

According to coach Randy Wittman, it’s all part of a concerted effort to change the DNA of the team from what it was a few years ago when he took over for Flip Saunders. “No question [it’s been a conscious decision to acquire veterans]. If you’ve got eight of your 10 guys with two years or less experience in your rotation, it’s going to be tough. We had to figure out who we wanted to move forward with and then filter in around them with experienced guys that know how to play and are good people.”

Flash back to just a few years ago, when Wall first entered the league. Guys like JaVale McGee, Andray Blatche, Jordan Crawford, and Nick Young were playing major roles — roles that are now filled by veteran stalwarts Nene, Gortat, Miller, and Pierce.

“We want to try to keep a good mixture with our young guys and veterans,” Wittman said. “I thought that was a big part of our success last year. The guys we got this year have a lot of experience. Humphries, Pierce, and Blair, combined, I don’t know what it is, but it’s a lot.” 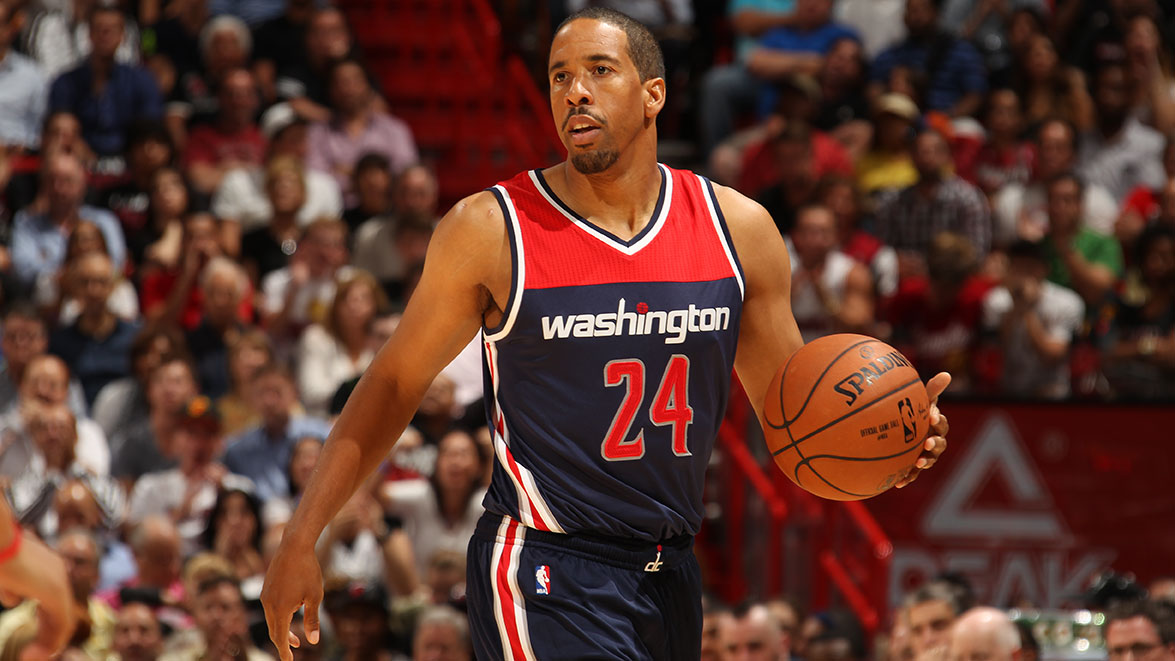 Wall certainly still has his hands on the wheel for Washington, but instead of having a bunch of youngsters messing around in the backseat, he’s now navigating his way through the league with a pack of been-there-done-that vets who help augment his skill set in different ways, and whose games he helps unlock, too. Nene and Gortat are each good post-up players, and both work well in the dribble hand-offs from the elbow that comprise a good portion of Wittman’s offense. (When I spoke to Beal last season, he specifically mentioned his chemistry with Gortat on those types of plays and off-ball screens.) They more than hold their own in post defense and know where to be when making help rotations.

Miller is the calming veteran presence for the second unit, always directing the flow and controlling the tempo. Gooden has reinvented himself as a stretchy big who plays solid defense. Butler and Humphries aren’t getting many minutes just yet, but both have reliable skill sets (shooting and defense for Butler, rebounding for Humphries) and provide leadership and savvy in the locker room.

“We knew we needed those guys to help win games,” Wall said. “We know if we’re keeping the lead close, they can build one for us.”

That’s exactly what happened down the stretch of Washington’s win at Madison Square Garden on Tuesday night. A lead that was once as high as 14 points had been cut to six after Iman Shumpert connected on his fourth 3-pointer of the game, and then Washington’s next three possessions went like this:

Possession 1: Professor Andre Miller, PhD (h/t Zach Lowe) dribbled up the left side of the court and, after taking a screen from Otto Porter and dribbling away from one set by Drew Gooden, found himself guarded by Carmelo Anthony on a switch. He drove baseline on Melo, drawing two help defenders, and found Kevin Seraphin at the elbow for an open jumper.

Possession 2: After a miss by J.R. Smith on the other end, Miller brought the ball up the right side of the court and, after rubbing off another Porter screen, backed Pablo Prigioni down to the right block. He faked over his inside shoulder, turned back toward the baseline, and hit one of his classic mini post-up jumpers.

Possession 3: Melo came down and buried a jumper on New York’s next possession to cut the lead down to eight, and then Miller, again after taking a screen on the wing from Porter, drew J.R. Smith on a switch along the left sideline. Again, he backed his way down to his office on the block — this time with a series of spin moves. One last spin put him into the middle of the lane to line up a fallaway jumper, which he of course dropped through the rim.

It was, as Clyde Frazier said on MSG’s broadcast, “vintage Miller.” Asked about that sequence after the game, Wittman said, “If that’s a rookie bringing the ball up and trying to make those decisions in a tight game, in Madison Square Garden, it might be a different outcome. I had Andre as a rookie (Wittman coached the 1999-2000 Cleveland Cavaliers), and now I got him again. It’s comforting to have a guy like that on the floor. When the place is going bananas and the other team is making a run, that calms things down.” 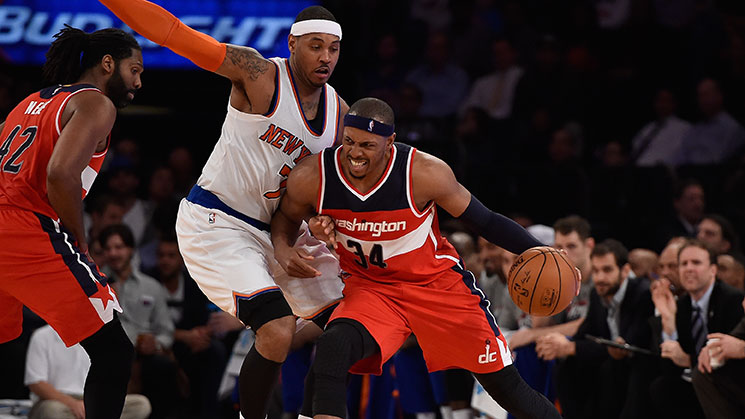 Then there’s Pierce, who’s been a crunch-time assassin for years now, and though he’s getting up there in age, he’s definitely still got it. He hit what was probably the game-icing shot in the win over New York, connecting from deep after a spectacular cross-court pass from Wall, who looked off Carmelo Anthony to the corner and then swung it to Pierce on the wing. “He gives us another guy that can take and make big shots. That’s why we’re thrilled to have him, the experience that he has,” Wittman said. “You always want a guy at the end of the game who wants to take a shot. He’s proven that throughout his career.”

“Guys like me, Andre, Drew Gooden — we are the vets. We bring a calmness to this ball club when things are going too fast and we’re not executing,” Pierce said. “We have a great mix of youth and veteran guys that gives us an even keel, especially in tight games or games that are in the balance.”

In addition to the immediate on-court effects, the vets provide all those intangible benefits, too, passing on the tricks of the trade actively or just through osmosis. “You’ve got guys who have been in the league and been in situations thousands of times. They know what to do and they don’t get rattled,” said Porter, who’s in his second year out of Georgetown. “Just having that leadership there, that’s incredible.”

After struggling with injuries and rarely seeing the court last season, Porter has stepped into the void left by the injured Beal and Martell Webster and played well. In just under 26 minutes a night, he’s averaging nine points, 3.6 rebounds, 1.6 assists, and 1.2 steals per game while shooting 48.4 percent from the field. He’s quick to credit Pierce with helping him pick his spots. “[He shows me] the tricks. Scouting reports, things like that. Where I can find my shots and how I can be aggressive, whether it’s offensively or defensively.” (Maybe he’ll pick up Pierce’s “not touching, can’t get mad” defensive strategy, too?)

Wall, meanwhile, is trying to soak up as much as he can learn from all the older players, but he singled out one thing he can take from Miller in particular: “You can’t speed him up.” Wall might be the fastest player in the league with the ball in his hands, but, as Zach Lowe pointed out on Tuesday, he’s still working on controlling the speed of the game himself rather than letting the opposition rush him and force him into mistakes.

Getting tutelage from vets is a standard part of the growth process for younger players, but as newcomers to this year’s team, both Butler and Pierce said they’ve been doing their fair share of learning from the younger guys, too. “Young guys are helping some of the veterans on the team because they’ve been here before and they know the offense,” Butler said. “But defensively, everybody is speaking to one another about how they can improve and be a better unit.”

If you’ve watched Pierce for the last 16 years in Boston and Brooklyn, you know he’s always talking on the court, whether to his own team or to the opposition. He has brought that with him to Washington, and it has extended beyond communicating during gameplay. “[I] get into the timeouts and tell them what’s going on, or what’s going wrong. I talk to them at halftime. I’m talking to them [young] guys all game long,” Pierce said. “We have to communicate, and that’s gonna make us a better team. But I also ask them their opinion so we can continue to grow and get better.”

The Wizards hope that this mix of explosively talented youth and steadying veteran leadership will elevate them to another plane of success. They made the playoffs for the first time since 2008 last season, and made it out of the first round for the first time since 2005. They’re a trendy pick to finish third in the East behind Chicago and Cleveland, and a dark horse to make a run to the Eastern Conference Finals. After last night’s overtime win against the Pacers, Washington is 4-1 — and with Beal and Webster both eventually set to return, more reinforcements are on the way. It has taken a few years, but with a handful of smart trades and free-agent signings, they’re right where they want to be.