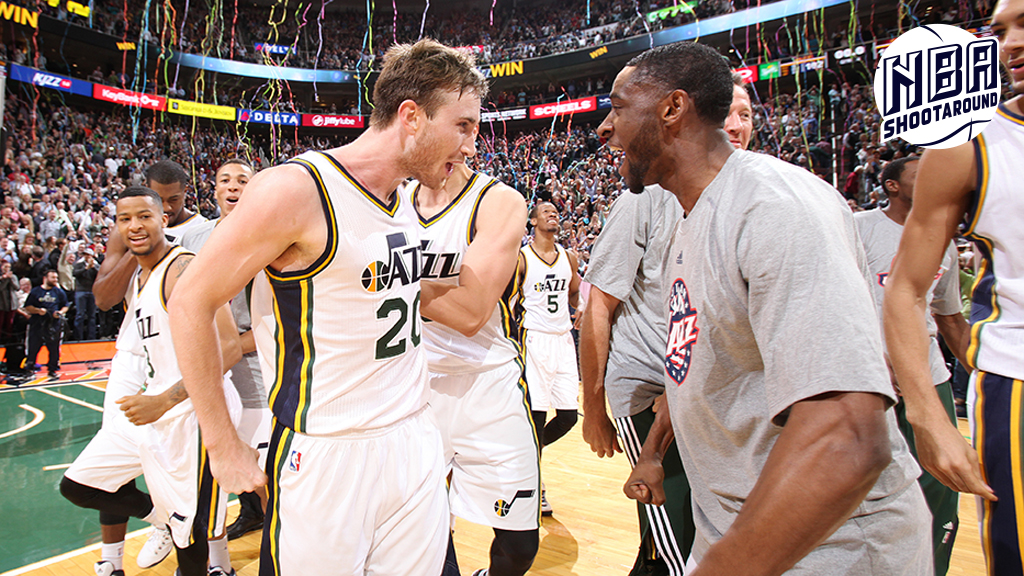 (All GIFs by Jason Gallagher unless otherwise noted)

Derrick Favors has been reining in his physicality, shooting over 60 percent, and logging a small-sample-size-theater PER of 28.6. Then you have the somewhat inconsistent but always aggressive backcourt law firm of Burke & Burks; Rudy Gobert, the steadily improving en français Slender Man rim protector; the continuing adventures of Crocodile Dante and his sidekick Joe Ingles; and coach Quin Snyder looking like the Joker before he fell into the vat of chemicals and making the most dark metal deathcore faces ever seen on an NBA sideline.

The Young Jazz eked out a rousing win over the Cavaliers last night with a balanced, teamwide attack that saw four players score in double figures, paced by Hayward’s 21 points, seven assists, and four rebounds.

Hayward made his career on doing a little of everything. Against Cleveland, he simply did everything. He had this chase-down block on LeBron (it was an obvious goaltend, but we’ll let it go; it’s his night):

He bottled up a LeBron baseline drive late in the fourth to keep Utah in the lead, and then no-scoped the game winner at the buzzer after LeBron had tied it with free throws.

How was that, Jerry?

As for the Cavs … well, in retrospect, maybe a warning light should’ve gone off when Kyrie Irving asked Mike Miller, “Is this similar to what the playoffs feel like?” during their second game of the season.

Actually, I hope he asks that every game. Irving had 34 points and zero assists, and all of those points felt like one guy, on his own, screaming into the void. Same with all the Cavs players. Sure, it’s early, but in addition to being vulnerable defensively — which is not that surprising — they’ve been downright miserly about sharing the ball.

Chris Ryan: During his postgame interview on the local Utah telecast last night, Gordon Hayward looked like he saw a ghost, in the best way possible. Sure, sinking a game winner in a regular-season game, in November, doesn’t make up for missing a game winner (no matter how outrageously difficult a shot) in a national championship game, in April. But it sure doesn’t hurt.

During the interview, Hayward was visibly overcome with emotion. I think there were two things going on. For one, he had just been mobbed by an ecstatic, youthful group of teammates, who just notched a signature win early in their season. There was Dante Exum, Rodney Hood, Derrick Favors, and the young-at-heart Steve Novak piling on Hayward in a scene the Jazz announcer accurately called “bedlam.” Hayward was probably overwhelmed by the attention and intensity of the moment. When he was asked what winning this game meant to him, he said, “I think we’re competitors.” It sounded like something he had only just become sure of.

Maybe it’s more simple than that, though: He got his game winner. That must feel amazing, no matter what month it is. 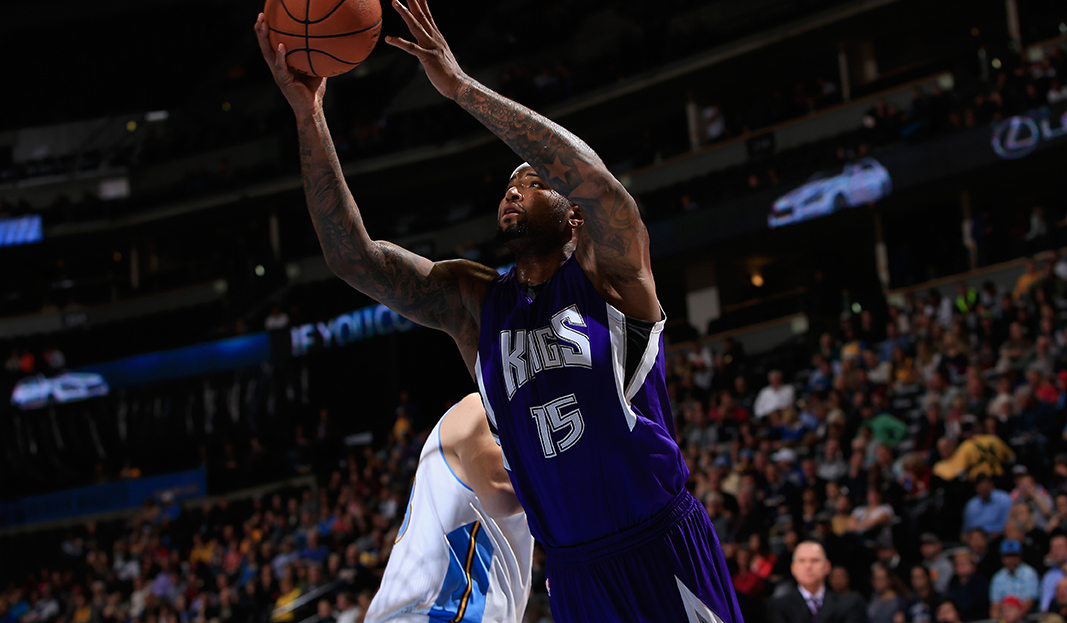 Jason Gallagher: For those of you still sitting, I ask that you stand and join me in making a joyful noise. Repeat after me … Hallelujah, Boogie is here.

There’s been a grassroots movement over the past few years, filled with those who believe in the greater power of Boogie Cousins. They believe that his abilities overshadow his circumstances. They believe that the self-defeating parts of his attitude will one day be stripped away, and all that will be left is his game. They believe that, in time, his name will be known and his power will be feared by all.

It appears that the day of Boogie is now upon us.

Perhaps I’m overreacting a bit? Can you blame me?

For those of us who have been patiently defending Cousins over the years, we can’t help but revel in this moment — we must savor it. That’s why I’m proud to present to you the next paragraph …

Last night the Kings wrecked the Nuggets, 131-109, and improved to 4-1. Cousins led the way with 30 points on 10-of-14 shooting (10-of-11 from the line) and 11 boards. Want to hear something crazy? Boogie did all of that in 22 minutes. Want to hear something even crazier? Of the 18 players averaging more than 21 ppg, Boogie is the only one doing it while averaging less than 30 minutes a game. You read that right … BOOGIE AVERAGES 24 POINTS … IN 29 MINUTES … PER GAME … MY GOD. 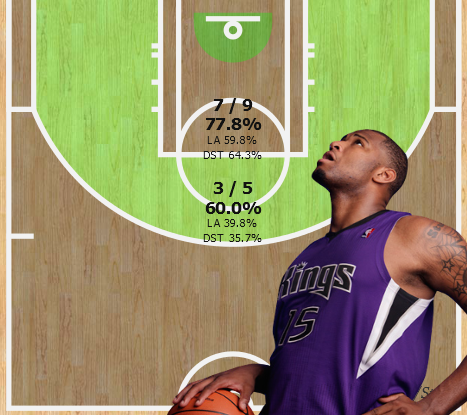 This is your call to action. Accept Boogie into your hearts and let him change you.

Steve McPherson: Following the Minnesota Timberwolves closely for these last several years has been, in a word, deflating. When the wins came, the feeling that came with them was less a righteous fist-pump than a kind of weary sigh. You felt like they were finally living up to expectations. There was nothing to get excited about.

Andrew Wiggins is turning out to be a tonic for that kind of feeling, simply because we don’t really know what he’s supposed to be. His defensive instincts are already there, but, in spots, his offense flares incandescently. His drives to the basket begin a little wild, a little unhinged, and then end with the ball softly curling around the rim and dropping in, usually with a foul to go with it. Simply put, it’s not the kind of strong finishing the Wolves have had in more or less forever.

In his fourth game as an NBA player, Wiggins scored a career-high 17 points (the highest for any rookie this season) and shot the highest percentage of any Timberwolf who took more than three shots (.583). He played the second-most minutes on the team, made the only 3-pointer he took, and kicked in four rebounds and a steal, while turning it over only once. OK, he got eaten alive in the fourth by Joe Johnson, who backed him down in the paint and demanded, “Who ever told you that you could work with men?” But the Wolves hung in there and won, and even if Wiggins wasn’t the difference last night, he’s already making Ryan Saunders feel good enough to slap Sam Mitchell’s ass. 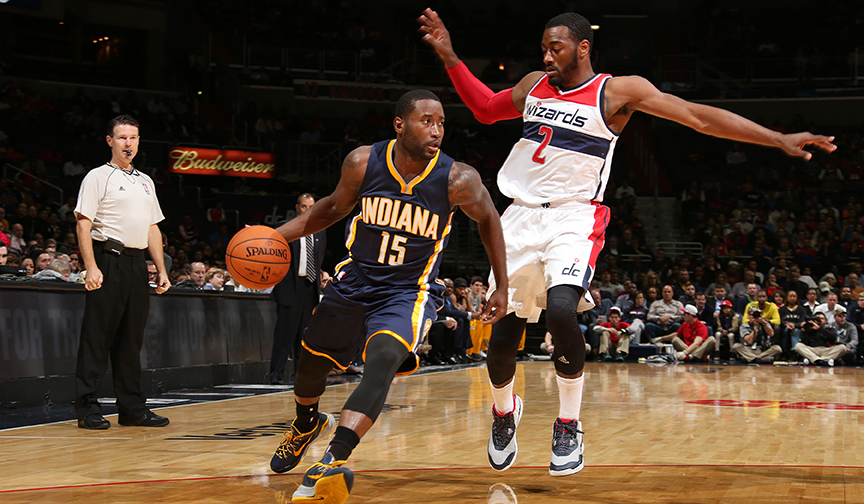 Kirk Goldsberry: MAN. The Pacers have a dark energy right now, but Donald Sloan put on a SHOW last night. He had 31 points and seven assists in a losing effort against the Wizards. Many of us have no idea who Sloan is, but that doesn’t matter. Last night the journeyman was the guy who made the Pacers watchable. Indiana may play the ugliest kind of basketball in the world, but Sloan isn’t the reason why. Unfortunately it still ends up using Roy Hibbert spot-up 3s in critical moments. Roy Hibbert. Roy Hibbert. 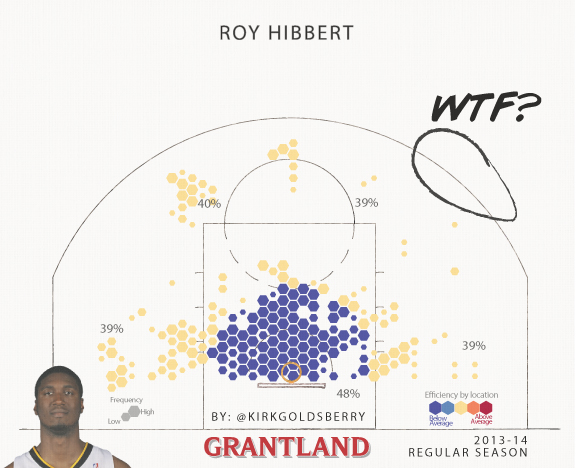 Elsewhere in basketball America, the Hawks had a chance to steal a game against the Spurs. Down two, with three seconds left, they ran a “play” that resulted in Pero Antic shooting an attempted game winner from 38 feet away. C’mon, man. 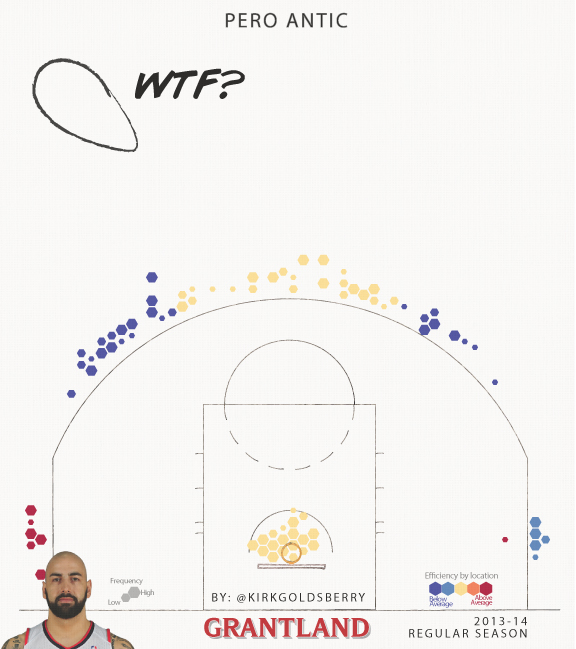 Maybe watching Tim Duncan made Antic gassed about what big men are capable of.

David Jacoby: Donald Sloan wasn’t the only unheralded Indiana Pacer with a name that sounds like a hedge fund who contributed last night. Don’t sleep on Solomon Hill! Homeboy who just a year ago was tearing it up for the Fort Wayne Mad Ants got the starting nod and had 14 and 8 on 5-for-9 shooting. Now, I am not saying that Hill’s game is NBA-ready … but I am saying that Hill’s beard-and-hair game is decidedly not NBA-ready. Look at the dude: 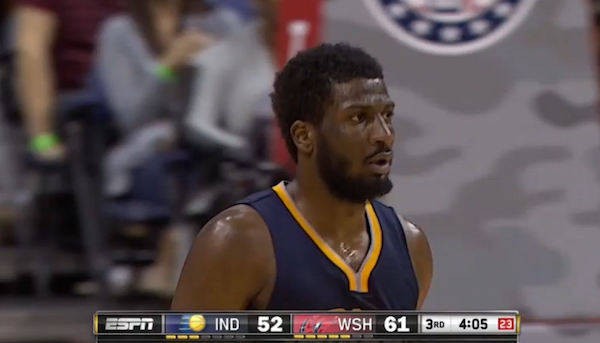 What is that? Is he going Joaquin Phoenix on us? Is Casey Affleck following him for a faux-documentary? Does he know that cameras are going to be at the game? Dude makes Amar’e Stoudemire look like Michael B. Jordan. In the same game, but on the follicular flip side, we have the perfection that is Marcin Gortat’s dome piece: 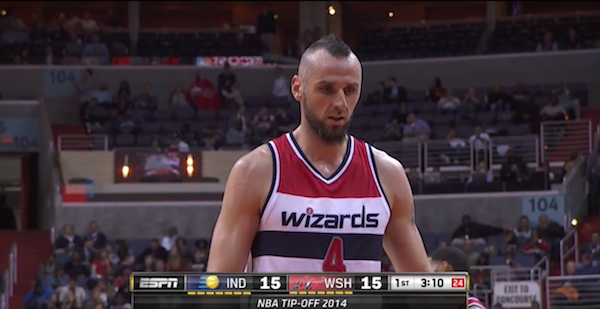 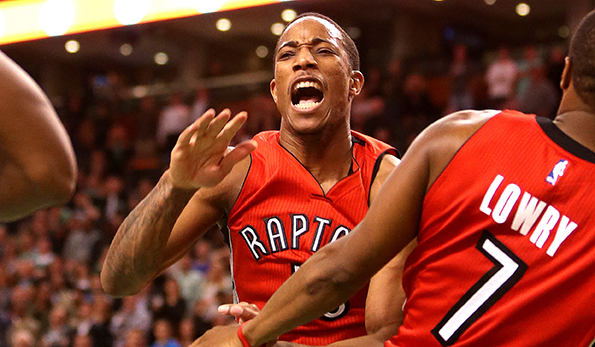 Danny Chau: Let’s have some fun with numbers! At the 5:06 mark in the first quarter last night, the Celtics were up 25-9 against the Raptors. For the game, the Celtics had one player with a triple-double (Rajon Rondo with 13-10-15) and two other players with double-doubles (Jared Sullinger with 19 and 16; Kelly Olynyk with 18 and 13). According to ESPN Stats & Info, the last time the Celtics accomplished that feat was April 11, 2012.

The Celtics had a stellar night on offense. They lost by three. How?

They couldn’t hold on to the ball, like, at all. Five players coughed up possession four or more times. The Celtics had 28 turnovers, tying the Bucks for most this season. If we exclude team turnovers, the Celtics (and Bucks) had 27, which is the third-highest figure in the past 10 seasons. Conversely, the Raptors had seven turnovers. That minus-20 turnover margin for the Celtics is the second-worst in the last 10 seasons.

Boston saved the best (worst?) for last: With the score tied at 105 and less than a minute remaining, this happened:

The best backcourt duo in the East just doing what they do. Quick, let’s cut to DeMar DeRozan’s baby daughter’s reaction back home:

Nobody Cares About the Grizzlies 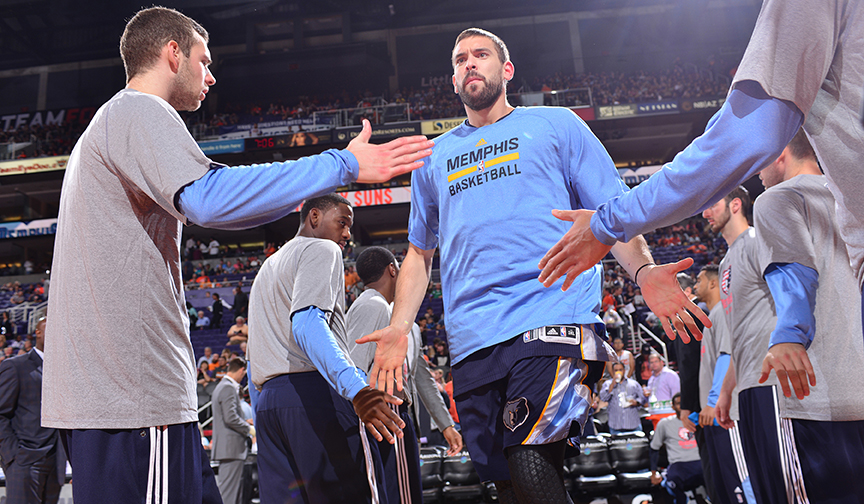 Andrew Sharp: The Cavs lost, the Kings are America’s Team, the Warriors look like title contenders, the Clippers look awful, Randy Wittman and the Wizards made Donald Sloan look like Allen Iverson. There are a lot of takeaways from Wednesday night, none of which include the 5-0 team in Memphis. But I picked the Grizz to win the West, so I’m invested here. So let’s talk about it.

Last night gave us a sequel to last year’s de facto playoff play-in game with the Suns. It was the unstoppable force (blinding Suns offense) and the immovable object (12 men, playing as one Zach Randolph). For the first half, Eric Bledsoe was everywhere and the Grizzlies couldn’t stop the Suns or score enough to keep up. Phoenix went into halftime up six. It was a reality check for everyone drunk on Memphis title dreams.

Then the Grizzlies went to work. They won the third quarter by 11 points and outscored the Suns 56-39 in the second half for an easy win. Mike Conley had 24 points, Marc Gasol had 18 points and six assists while anchoring everything on defense, and supermodel shooting guard Courtney Lee erupted for 22 points, including 4-of-5 from 3, and the Memphis announcers were ready to kiss him on the mouth by the end. If he shows up like that in May, the Grizzlies aren’t losing.

You don’t care, of course. There are more important things to talk about today. And that’s fine! The Grizzlies don’t care if nobody cares about the Grizzlies. Just remember that we had this conversation when it’s May and nobody can stop the immovable object.

JOSH SMITH IS FOR THE PEOPLE

Detroit crowd loudly boos as a contemplative Josh Smith — with a devil on one shoulder and an angel on the other — launches another 3.