How Oakland Tried (and Failed) to Do Replay Differently 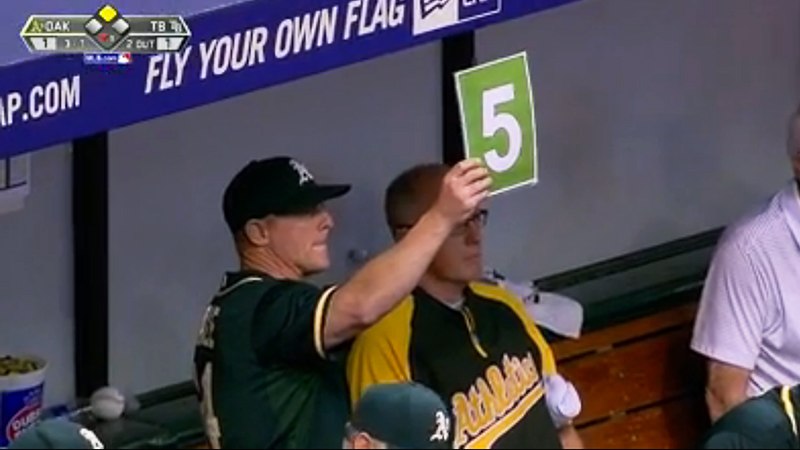 Shortly after what would turn out to be the first overturned call of the regular season, Braves bench coach Carlos Tosca gave us a good idea of what the prelude to almost every managerial challenge in 2014 would look like:

Along with headset-wearing umpires huddled behind home plate, gesticulating coaches have become one of this season’s signature sights. The need for long-distance communication arises from the way the replay system is structured. Replay rules dictate that the manager must issue his challenge before the pitcher returns to the rubber or the batter enters the box; after a third out, he must “immediately run onto the field” to notify the umpire that he’s contemplating a challenge, after which he has 30 seconds to decide whether to use one. When the manager leaves the dugout, he has little to go on beyond his own impression of the play and the reactions of the players involved, which might not be enough to tell him whether the challenge makes sense. So while the skipper strolls out and makes small talk with the ump, his team’s video coordinator reviews the feed from as many angles as possible and fills in the bench coach via the dugout phone. The bench coach then relays the verdict to the manager, who by that point is probably eager to stop stalling.

Bench coaches all over baseball have settled on the same signaling solution as Tosca; not since Siskel & Ebert went off the air have thumbs played such a prominent role on the screen. Baseball is no stranger to elaborate signs, but signaling “challenge” or “don’t challenge” doesn’t call for much secrecy or complexity. For the most part, the simple system works. However, it does have one drawback: Thumbs aren’t great at indicating degree. Depending on the situation, the manager might want to know how confident the video coordinator is in his assessment, since a low-probability challenge might make more or less sense at certain times. So instead of restricting themselves to the thumb, the A’s, seemingly alone among major league teams, have embraced the power of all five digits — except in place of actual fingers, they’ve substituted printouts from Microsoft Word.

Last week, we got a good look at the unique way in which the A’s handle the replay review process. With two outs in the ninth inning of a tie game against Tampa Bay, Rays center fielder Desmond Jennings attempted to steal second and was ruled safe. A’s second baseman/Vice-Face of MLB Eric Sogard signaled for manager Bob Melvin to challenge. Before Melvin even made it to second, bench coach Chip Hale had brandished a green piece of paper bearing the number 5, inviting figure-skating judge jokes from the broadcast crew.

Melvin saw the signal, challenged the call, and was rewarded with the third out of the inning when the umpires established that Sogard had, in fact, applied the tag in time.

Hale is far more forthcoming about the significance of his signs than his NFL equivalent, Eagles head coach Chip Kelly, has been about his, perhaps because Oakland’s numerical system is more transparent than Philadelphia’s (which is partially based on Fresh Prince). The Oakland system is the brainchild of assistant general manager Farhan Zaidi, who suggested it to A’s video coordinator Adam Rhoden during the Bay Bridge exhibition series that immediately preceded the start of the regular season.

“Adam came to me and said, ‘Farhan thinks this is a good idea,’” Hale says. “And so we actually just made those cards up — we went on to Microsoft Word or something, made huge numbered cards, and we have a laminator down there.”

Although it wasn’t clear from the video where the card that Hale held up on the Jennings play fell on the replay recommendation scale, a 5 is Hale’s strongest endorsement.

“Five is ‘challenge for sure,’ all the way down to 1, which is a red card with a 1 that basically says ‘no,’” Hale explains. “Three is yellow, which is ‘it could go either way.’ … And anywhere in between — a 4 would be better than a three.”

Hale has flashed four of the five cards this season; thus far, the 2 hasn’t seen any playing time. Surprisingly, the results haven’t always mirrored Rhoden’s level of certainty. The A’s had two 5-rated challenges go against them in the first week of the season, which Hale attributes to the replay umpires’ early unwillingness to overturn calls on the field.

Hale believes that “the umpires that are back in New York are becoming more comfortable with overturning plays,” and his theory holds up. Managers have challenged slightly more often in May than they did in April, but their attempts have met with much more success since the first two weeks. According to data obtained from Major League Baseball, 36 of 101 challenges through April 16 were successful (35.6 percent). From April 17 through Memorial Day, though, 144 of 280 challenges (51.4 percent) resulted in an overturned call.

However, even though clearly incorrect calls are more likely to be overturned today than they were in early April, Hale has found that borderline calls are seldom worth the challenge.

“Every time I give a 3, which means, ‘Hey, it’s up to you,’ to the manager, the video doesn’t really conclude either way,” Hale says. “Whatever the call that’s made on the field — which obviously, if we’re challenging it, is going against us — it’s going to be upheld. I haven’t seen one of the ones where we’ve said, ‘Ah, it could go either way,’ go the way other than what the umpires call.”

If the outcome of a potential challenge is often obvious to Rhoden on replay, and the few inconclusive cases are rarely overturned, there’s little benefit to giving Melvin a more granular sign. Consequently, Hale has found himself reaching more and more often for either the 1 or the 5, which he expects to continue to do unless it’s a “ninth-inning, game-winning play” when the Athletics have nothing to lose by challenging the call.

Even though Hale’s numbers are now just glorified fingers, he plans to stick with them. Colored cards have one advantage over fingers: They’re easier to see from a distance, which matters at the O.co Coliseum, where foul territory is expansive and the dugouts are far from the field. The cards also keep the umpires entertained.

“I think we’re getting a little bit of heat about it — some people are laughing at us,” Hale says. “But the umpires always are interested. They’ll laugh at the manager, like, ‘What’s that mean? What’s that number 5 or number 3 mean?’”

If the in-stadium umpires were the ones reviewing replays, seeing Hale hold up a high number might exert some subconscious effect that could aid the A’s. As things stand, however, the A’s haven’t enjoyed any discernible edge. They haven’t challenged much more often than the typical team, and they haven’t seen a higher success rate. Through Thursday’s games, the average team had issued 11.4 challenges at a 47.4 percent success rate. Oakland had issued 13 and won six, a 46.2 percent success rate.

If the A’s overthought their response to expanded replay, they weren’t alone. This spring, many analysts warned that given the relative rarity of clearly incorrect calls and the slight penalty associated with issuing failed challenges, managers had every incentive to challenge on anything close, which would have led to a lot of frivolous reviews. (“We all felt that way,” Hale says.) However, while frequent challenges might be the correct course of action if managers were forced to decide quickly, those preseason articles underestimated the amount of time that managers would have to review the evidence before making up their minds. Because they can talk to their players and get informed feedback from their video coordinators before committing to a course of action, they’ve issued far fewer challenges than the analysts feared (albeit more than MLB’s VP of baseball ops, Joe Torre, expected).

“As we go on, we learn that the umpires have a good idea of what they’re doing,” Hale says. “And unless we get really good evidence, it’s not worth going out there and stopping the game.”

Of course, some stoppages are inevitable, and MLB has already discovered the downside of a challenge-based system that (rightly) puts accuracy ahead of a faster pace: There’s a lot of thumb-twiddling between the conclusion of the play and the decision to review, and not just by bench coaches. The best solution might be to do away with the challenge system and task umpires with initiating reviews of close calls, although that method would come with its own potential pitfalls.

If the replay process changes, the A’s will surely search for another way to exploit it. Judging by their choice of word processing program, they don’t “think different” when it comes to purchasing computers. But they do in many other areas, which has helped them make the playoffs seven times and average 88 wins per season from 2000 to 2013, a period during which they also averaged the sixth-lowest payroll in baseball.

There are limits to the Athletics’ willingness to experiment, though. Baseball Prospectus contributor Lewie Pollis recently suggested that teams would benefit from hiring additional replay personnel (which jibes with Billy Beane’s belief that hiring front-office talent can be a more efficient way to add wins than spending on free agents), yet Rhoden remains Oakland’s only reviewer. Still, that the 2014 A’s are in first place and playing at a 96-win pace with the game’s fifth-lowest payroll is in many ways a testament not only to the close link between front office and field staff that made the colored cards possible, but also to Zaidi’s ingenuity; the AGM has had a hand in many of the decisions that have yielded baseball’s best run differential, such as prioritizing platoons, believing in Brandon Moss, aggressively trading young talent, and assessing injury risk.

It doesn’t look like Oakland’s decision to use a tiered system instead of a binary system for replay review is going to end up on the “Best of Moneyball” big board, but the occasional dud is the cost of creativity. A lot of innovations are worth trying, but few become fodder for best sellers.

The $2 Billion Bubble? What the Clippers Sale Means for the NBA and the Players