Norm Macdonald on the Return of the Tiger and Rory Show 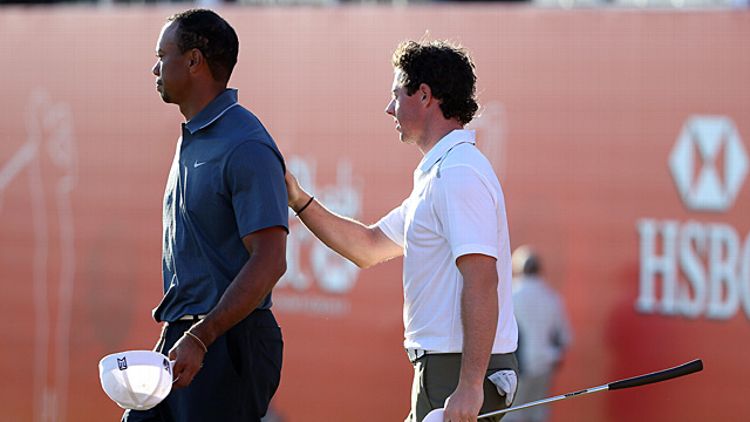 After a month of golf, Rory McIlroy and Tiger Woods are tied. For dead last.

Not that you’d know, unless you were watching golf. They’ve already been paid $4 million between them. Not winnings, appearance fees. Somebody smart once said 80 percent of success is just showing up. Here it’s 100 percent. You know you’re doing very well in life when you think you should be offered $3 million in exchange for your appearance.

“What do you charge?”

It doesn’t count as earnings because nothing about the money is earned. It’s found and given. Rory fell into 200 million unearned dollars from Nike last week. Least that’s what he thought. Turns out those clubs are gonna be very expensive to Rory.

The Tiger and Rory show was heavily promoted by Nike, in a recent ad that showed the two on some otherworldly driving range trading barbs.

“Just trying to keep up with the old guy, you know?”

“Dude is that your real hair?”

Pretty hostile banter on paper, but you could tell by the guys’ demeanor they were just funning. Their golf shots were odd though. Drives crashed through people’s windows; one almost killed an old man on a tractor. And then Tiger, in full psychopathy, unloads his low stinger into a wedding party where his ball skips across mimosas and stops just short of the bride and groom. I guess the point is Tiger hates marriage.

This week, the Tiger and Rory show debuted for real. On this episode, Tiger and Rory took a lot of money from some Arab guys to show up and golf, but then they got there and totally stunk. It was entertaining, but left us the whole weekend to watch Russell Henley play golf.

Here are four reasons why Tiger will beat Rory all year long:

1. The Powers of Pairing

Rory is no. 1 in the world, Tiger is no. 2. To become no. 1 again, it’s absolutely necessary that Tiger beat Rory. How does he manage this? By introducing a change in tournament golf that no one has even noticed yet because it’s so entertaining. Tiger, in every event, makes sure he is paired with Rory McIlroy on Thursday and Friday. Why does this matter? Because Tiger is the best match-play golfer alive. His first great moment in match play: Down five to Trip Kuehne with 12 holes to go, an 18-year-old Woods staged one of the best turnarounds ever by winning five of the next 10 holes, then sinking a 14-footer on 17. (Kuehne was so devastated, he decided against turning pro.) Tiger also has a terrific singles record at Ryder Cup and the President’s Cup, as well as an 11-1 record in playoffs (essentially match play). You don’t want to be paired with Tiger Woods. Even now.

2. The “Tiger vs. Rory” Rivalry Only Favors Tiger

Tiger has been desperately searching for any story line after 2009’s unpleasantness, and this one should prove perfect. When Tiger was the best in the world, he worked alone. Always alone. He beat entire fields. Now he has to beat one guy. Everyone will watch because the cameras will be on them, and the guy who wins the event will spend his press conference answering questions about Tiger Woods. All of this helps Tiger. Unless another star emerges like Louis Oosthuizen and my theory gets shot to hell.

3. The Perils of Fame

Nike makes Rory a legitimate superstar. Nike makes fame. And nobody handled fame better than Tiger Woods for that first decade or so. That’s what made it so shocking when everything suddenly fell apart for him in 2009. When Rory hit the radar at 19, some said he could be big. Then he choked. Then he didn’t. Then he did. And then he didn’t again. He’s also from Northern Ireland. That can’t be overlooked. When Darren Clarke won the Open, he said he’d take a little time off to return to his first love: drinking booze out of the Claret Jug.

Tiger? He made his premiere on The Mike Douglas Show with Bob Hope at age 2. If you watch the entire clip, there’s one unseemly moment. After The Precocious One drives the ball straight and true, Hope turns to the camera and says “Kid must be on dope.”

Tiger was never dazzled by fame because it came so early, you see. He was always told he was special, better, chosen. All toddlers feel that way. That’s why Tiger never attended soirees or award shows. Tiger just golfed. And even though he remained the most public of figures, he was alone on the course, utterly alone among his adoring fans, waiting until his final putt on the 72nd hole to flash a frozen smile and tip his cap to no one in particular. Let Phil glad-hand the gallery, let John Daly clown around, let Steve Stricker be classy and well-liked. Tiger, like Jay Leno, cared about one thing and one thing only: winning. Still does.

To keep winning, Tiger knows he has to play as many tournaments as possible in this abridged season. Meanwhile, Rory is off for a month and then it’s time for match play — if he gets knocked out in the first round, he’s in trouble. He’s in trouble anyway. Big trouble. Which brings us to my next reason.

4. Money in the Bank Loosens Up Your Game

Rory will not win a tournament this year. Why? Because of those free clubs and that fat bank account. Rookies don’t win much because rookies aren’t trying to. They can’t afford to. They have to make their mortgage, which means keeping their cards, which means making cuts. Doesn’t make for daring shots. But it is what has always made golf grand. Your money is earned.

With one exception. Before he struck his first shot as a member of the PGA, Tiger Woods already had $60 million in the bank. Guys with that kind of money don’t lay up. Even though the money came from Nike, Tiger used whatever clubs he felt like, as long as he wore a Nike cap (which quickly became a Tiger Woods cap). Rory’s deal is a little more difficult. Coming off a brilliant year, now he’s being forced to use a bunch of new clubs? He doesn’t have a chance. Rory will be rich and famous for the rest of his life and maybe that’s enough. Maybe success trumps merit now.

The best exchange this week came between two golf commentators. One was Sir Nick Faldo, winner of three Open Championships and three Masters. He’s also been knighted. The other guy I didn’t know, and I’m guessing he hasn’t been knighted.

Faldo: I mean, is it really worth changing clubs? You get $200 million and you may miss out on winning 10 majors.

Other Guy: That’s a hard question to answer.

Sir Nick is silenced for a moment, bewildered. The question was rhetorical. On the other hand, Sir Nick Faldo is rich and famous and a knight. The other guy I didn’t know.

Tiger will win this week at Torrey Pines.

Norm Macdonald (@normmacdonald) will be tweeting about golf for The Week.