No, by All Means, You Dunk It: A Look at Blake Griffin’s Passing vs. the Heat 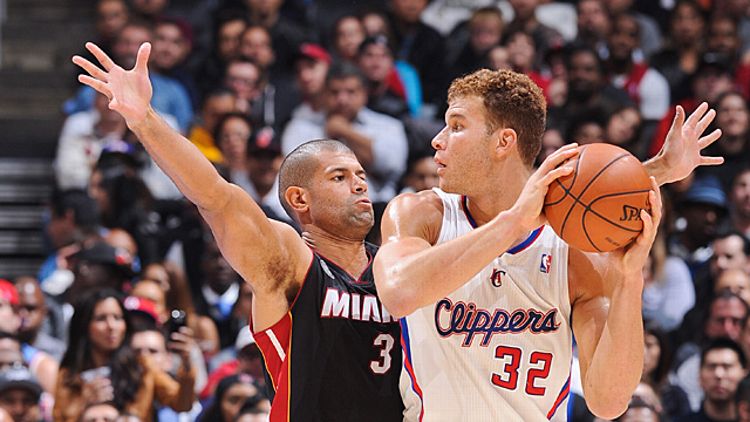 In today’s NBA, it’s hard to find a more polarizing player than Blake Griffin. To those that despise him, Griffin is a whiny, flopping ogre capable only of powering the ball through the rim with vicious force and little else. Others able to take a more objective look at his game point out that Griffin, outside of his shooting woes, is about as skilled a power forward as you’ll find in the league.

No matter what side of the fence people sit on, they likely still don’t give Griffin the proper credit for his ability as a passer. Last night, in the Clippers’ superb win against the Miami Heat, that skill was on full display.

Halfway through the second quarter, Griffin sets a ball screen late in the possession and receives a quick pocket pass. Immediately, he is met with a quick rotation from the Heat’s Chris Bosh that blocks his path to the rim. Instead of forcing an ill-advised attack, Griffin softly lofts a pass over the top of Bosh that DeAndre Jordan not-so-softly dunks.

Griffin’s third assist of the night is the result of a play that only a handful of true power forwards could pull off. After scooping up a deflection by Matt Barnes, Griffin races upcourt against a backpedaling Miami defense. As if his handle wasn’t impressive enough, Griffin restrains from trying to outleap a crowd of defenders and drops off a nifty pass, again to Jordan, for an easy bucket.

Griffin channels his inner point guard yet again early in the third quarter. After receiving a reversal pass from Chris Paul, Griffin takes one dribble toward the rim — a subtle move that lures Dwyane Wade to step farther away from his man — then kicks the ball out to Willie Green in the corner for a 3.

To cap off his performance, Griffin delivers an assist out of an isolation play. Matched up against Shane Battier just off the right block, Griffin uses a series of fakes before finally collapsing the defense with an attack toward the middle of the paint. Instead of forcing up a difficult shot, Griffin passes out to a wide-open Caron Butler, who squeezes off an uncontested look from behind the arc.

Along with Chris Paul, Griffin’s willingness to share the ball helped the team post a 112.6 offensive efficiency rating — a number that would surpass the Knicks’ season-leading mark of 111.4 — on the night. Griffin ended with six assists, recorded in an impressive variety of fashions.

The Clippers were fairly proficient from 3 last year, but in the early part of this season, Green, Butler and supersub Jamal Crawford are all currently hitting over 40 percent of their shots from deep. If that trio is able to keep up their torrid shooting, Griffin’s passing prowess will make L.A. an absolute nightmare to defend. That, along with continued defensive improvement, will make the Clippers serious title contenders for the first time in the existence of the franchise.

And Griffin needs only ask his opponents from last night what a championship ring does for a player’s reputation.