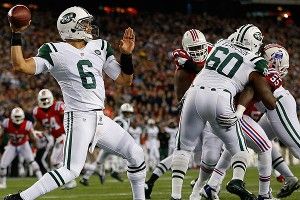 You may have noticed that we at Grantland take bad quarterback play very seriously. While Grantland’s finest in the Los Angeles office take part in the BQBL each season, my basis for bad quarterback knowledge dates back to a childhood during which the starting quarterbacks for my favorite team were universally terrible. You try suffering through Dave Brown, Kent Graham, and Danny Kanell for a five-year stretch and see how much you enjoy it. Those mid-’90s Giants teams even gave away Tommy Maddox, who would eventually become a starter in Pittsburgh after winning an XFL Championship, but he delivered one of the worst backup performances in a single year I’ve ever seen: 6-for-23 for 49 yards with three interceptions and a fumble is probably deserving of professional excommunication.

With my esteemed qualifications, then, I was skeptical this Sunday when people started referring to Philip Rivers’s bizarre pick-six against the Buccaneers as the worst pass of the year. Sure, it essentially turned a game that was about to be tied in the fourth quarter into one where the Chargers had an 11 percent chance of winning, but swings like that happen every day. A truly bad pass is more than just an ill-timed poor decision. It has to have panache. It needs to make you rewind with equal parts disgust and confusion. If possible, the cheery ex-quarterback doing color commentary should audibly groan or say something like “Oh no” as the pass is traveling in the air. It shouldn’t look anything like a normal football play. Those are the truly terrible passes. And after I watched Rivers’s pass, I realized that it did truly deserve to be in the running for worst pass of the year.

There’s an important distinction there, though. I didn’t want to be subject to recency bias and just anoint the most recent bad throw as the worst pass of the season. So, in service to both our readership and the truth, I went through my notes and tweets and rewatched a whole bunch of interceptions from the past 10 weeks. I closed my eyes and listened to the crowd’s roar of bewilderment. I watched the other players on the field to see how they reacted. I sat down with the coaches tape and tried so, so hard to figure out what on earth each quarterback was seeing when he made his dismal decision. And, eventually, I worked those interceptions down to a list of five. These are, so far, the worst passes of the 2012 NFL season.

If you do not trust that I am an expert on bad quarterbacks, you probably would at least believe that Kevin Kolb might have some insight into the genre. This interception was so bad that Kolb characterized it after the game as ” … probably the worst [interception] of my career.” Think about what that internal dialogue says: Kolb knew he had made a truly terrible throw, but he didn’t think it was fair to characterize it as his worst because he’s made so many of them.

On the play, which comes at the goal line in the fourth quarter of a tight game, the Cardinals motion Larry Fitzgerald to the right and then run a bootleg for Kolb, hoping that Fitzgerald’s speed and massive frame will be enough to shield any cornerback from the quick out. It’s very similar to the play the Saints frequently run in short-yardage situations with Drew Brees and Lance Moore, only with a significantly better wide receiver and a significantly worse quarterback running the play. Dolphins cornerback Sean Smith reads the play well and cuts off Kolb’s throwing lane, leaving Kolb with no angle to throw. Or so you’d think.

Once Kolb is finally pressured on the rollout, he decides to try to fit a throw into an extremely tight window. How tight? Tight like it’s not really a window as much as it is, say, a wall. A brick wall. I feel confident saying that because, as Kolb is throwing the ball, Fitzgerald is out of bounds. And not a “My toes are two inches out of bounds” level of unavailability, either; Fitzgerald is standing well out of bounds, with one foot nearly on the other side of the endline.

Kolb’s out of the pocket, so all he needs to do is throw the ball anywhere but right in front of Fitzgerald to get out of the failed play and move on. He can throw it high. Throw it low. He can throw it out of bounds at the line of scrimmage. He can try to hit the onrushing Dolphins defender in the stomach with it. He can even, as is his wont, take a sack. The only thing he cannot do is throw the ball right in front of Fitzgerald in a place where Smith can get to it, and yet that is exactly what Kevin Kolb does.

I don’t know that Tim Tebow is really the answer for the Jets, but anybody within that organization who leaked a quote about how terrible Tebow was to the media this past week should be forced to sit and watch this throw on rewind. For whatever weaknesses Tebow has as a passer, he would never, ever make a deep throw as bad as this one from Sanchez.

It’s hard to overstate just how easy of a touchdown this should be. The Jets run a perfect play to beat the Tampa-2 coverage that the Patriots call on the play, with their two cornerbacks covering shallow zones and their two safeties each responsible for half the field. You attack the Tampa-2 with deep throws to the corners of the field, and Stephen Hill runs an out-and-up that goes totally unrecognized. Nobody’s within five yards of him as he hits the 20-yard line, and any sort of a competent throw from Sanchez would make it an easy score.

Instead, Sanchez decides that he wants to try to pump-fake his receiver on the other side open. It’s a noble goal, I guess, but it seemingly takes him eons to get to his next read, reset his feet, wind up, and get his throw off. It took Simmons less time to creep out Brian Austin Green on the B.S. Report than it did for Sanchez to find an open receiver streaking toward the end zone. By the time he’s recognized that Hill’s open, Hill is striding over the 10-yard line and the safety and cornerback on his side have already begun to panic and sprint toward him.

The pinnacle, of course, is that Sanchez’s throw is nowhere near Hill. It comes up a good five yards short of where Hill had to cut off his route and closer to 12 yards short of where it needed to be (in the back of the end zone). Hill actually turns all the way back to Sanchez and tries to get back to make a play on the throw, but Pats corner Alfonzo Dennard is able to field it like it’s a relatively smooth punt and take in an easy interception.

It’s actually not all that different from Nick Foles’s touchdown pass to Jeremy Maclin from this past weekend, another play in which a limited quarterback was so late with his read and throw that the receiver was able to turn all the way back to his quarterback and field the pass like he was in warm-ups. The only difference was that Dallas’s coverage was so bad on the play that Foles got away with it. Also, Foles was making his first professional appearance, and Mark Sanchez was making his 60th. There’s that, too.

Rivers’s throw was awful, but it’s not the worst pass of the year. Obviously, it’s a terrible decision in an incredibly important moment, but I think what makes it really awful is just how impenetrable it is. I watch it over and over again expecting to see some angle that justifies what Rivers was thinking, but there’s just no path into what went through his mind for me. Was he trying to check it down to Eddie Royal? He couldn’t have been, because his throw’s trajectory (if untouched by the defender standing directly between Rivers and Royal) would have seen the attempt bounce several yards in front of Royal. Was he trying to throw it away? If so, given that he was standing on the sideline with a receiver in the area, why did he throw a pass that was at stomach level into the stomach of a Buccaneers defender?

I’m not the only person who can’t figure it out. Leonard Johnson — the player who intercepted the pass for the Bucs and took it to the house for a game-sealing touchdown — feels the same way. He said after the game that he was “shocked” that Rivers threw the pass to him and that he stuttered before running the pick back because it seemed so surreal. Well, it makes sense that Johnson was surprised. Most people don’t deliver Christmas gifts in the middle of November.

Just for fun, here’s a table with Christian Ponder’s performance this season, split into two groups: one before this play began, and one after he took the snap.

Now, I don’t know that this pass drove Ponder into a downward spiral. I like to think that it was just a blip in a slump that will be corrected over the second half, if just out of benevolence for a young quarterback.

But then you watch this pass, and … man, oh man, is it grotesque. Ponder rightly decides to check down on a third-and-long where nobody’s open downfield, but he overthrows his receiver — standing at the line of scrimmage — by a full eight yards. He overthrows the receiver so badly that Madieu Williams, playing a zone coverage so far away that he’s not even accounting for the checkdown, is able to fall down as he catches the pick, roll around on the ground, get up, and then run nearly sideline-to-sideline with the interception return without being touched before he gets inside the 5-yard line.

You know how an announcer fawns over a quarterback’s touch when he winds up and throws some craftily soft pass ahead of a receiver? In a fair, just world, the announcers would have chided Ponder for whatever bad touch he had on that throw and encouraged him to just one-hop a pass thrown as hard as humanly possible to his checkdown next time he had the chance. But even that checkdown gone horribly wrong wasn’t the worst pass of the year. That title belongs to …

You know how I know this is the worst pass of the year? Just watch Ryan Fitzpatrick the entire time. The camera cuts away from him briefly as the throw goes to the sidelines, but when it comes back, just watch Ryan Fitzpatrick. That’s how you know. Until somebody looks more depressed, dejected, and disinterested in his surroundings after a pass than Fitzpatrick did while that play was still happening, this is the worst pass of the 2012 season.

No, by All Means, You Dunk It: A Look at Blake Griffin's Passing vs. the Heat