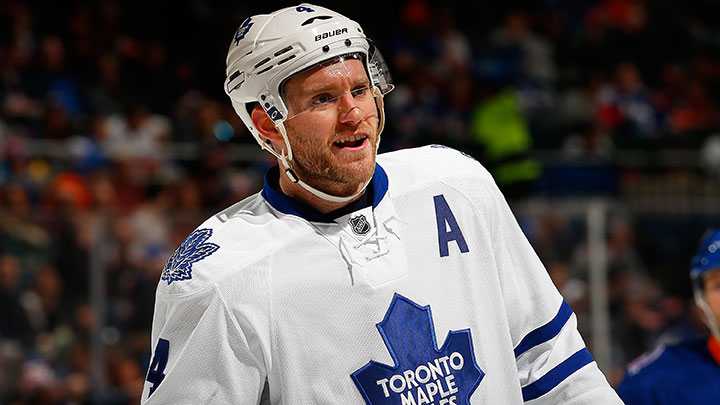 Theme of the Week: The Trade Market Wakes Up

We’re now two weeks away from the NHL’s trade deadline, and last week brought us the season’s first major deal. While we’re unlikely to see any moves over the next two weeks that rival that Jets/Sabres blockbuster in terms of size and scope, it stood to reason that the transaction page would start getting busy any day now.

“Any day” turned out to be yesterday, when we got our second major deal of the week:1 the Predators loading up for their playoff run by adding veterans Cody Franson and Mike Santorelli from the Maple Leafs. Both players will be unrestricted free agents in a few months, although either or both could re-sign with Nashville before the offseason.2 Franson is the main prize, a big right-handed defenseman with decent offensive numbers, while Santorelli is a depth forward enjoying a nice comeback season on a cheap deal.

In return, the Leafs got the Predators’ first-round pick, along with prospect Brendan Leipsic.3 Neither represents a sure thing, but they’re two decent future assets for a team that doesn’t have many to work with. The deal also signals that the Leafs are serious about finally starting a full-scale rebuild.

Who wins? That’s the beauty of these sorts of short-term rental deals. We get to hem and haw about it now, wait until we see how the season turns out, and then retroactively revise our opinions. If the Predators win the Cup, or at least come close, then they win big. If the Leafs … well, nothing good will ever happen to the Leafs, so we don’t have to worry about that.

We’ll do a more in-depth deadline preview in the days leading up to March 2, but this week, let’s spend a little time sorting out the buyers from the sellers.

5. Chicago Blackhawks (35-18-4, plus-41 goals differential) The Hawks return to our list, largely based on the horrible things they did to Marc-Andre Fleury in yesterday’s shootout. That stuff will help them in the playoffs, right?

4. New York Islanders (37-18-1, plus-23) Tonight’s game against the Rangers is a first-round preview, because we’ve all agreed to make these teams play in the first round whether or not the standings say they should.

3. Anaheim Ducks (35-15-7, plus-9) They’ve lost four of their last five, and they’re going to lose their spot on top of the Pacific if this keeps up for another — [checks standings] — three years or so.

2. St. Louis Blues (37-15-4, plus-41) The whole “Evgeni Nabokov gets traded to the Sharks right before he retires so he can end his career with the team he starred with” thing from last week had to make Martin Brodeur feel weird, right?

1. Nashville Predators (38-12-6, plus-39) Don’t look now, but with five straight wins they’re not just holding on to the top spot — they might even be starting to pull away.

It goes without saying that all five of these teams will be buyers, as will just about every playoff team and even a few on the bubble. With those teams outnumbering the sellers, that means prices will be high, as usual, which in theory could lead to the deadline being a bit of a dud if all the contenders collectively back off. Then again, it takes only one top contender to get aggressive for the dominoes to start falling.

The Predators could certainly sit out the rest of the fun, but here’s hoping they’re not done yet. In the Central, finishing first means avoiding a brutally tough first-round matchup with the Blues or Hawks, so there’s pressure here to be bold. Remember, the Predators were in this situation once before, in 2007, and they swung for the fences.4 Their lack of a first-round pick means they’ll have a tough time making any blockbusters, but another depth move or two wouldn’t be a surprise.

Nashville is also one of the only top teams with plenty of cap room. The Ducks and Islanders have some space to work with, too, but other contenders like the Blues, Hawks, Canadiens, and Penguins are much tighter. The Lightning could be a team to watch: They have a bit of room, and right now they look like as good a bet as anyone to emerge from the East.

Among the bubble teams, the Stars will be feeling the pressure to replace some of Tyler Seguin’s lost offense, while the charging Wild have already hit one home run and have the cap space to make more moves. The Jets do, too, and thanks to the Sabres, they now have some nice future assets to work with if they choose to.

And then there’s Los Angeles, whose predicament we’ve already covered. The Kings have specialized in making midseason deals recently, and they may be tempted to try it again. At the very least, Dean Lombardi and his two Stanley Cup rings should serve as inspiration to fellow GMs feeling skittish about pulling the trigger. Get out there, boys. And remember: Flags fly forever.5

5. Toronto Maple Leafs (23-29-5, minus-15) Look on the bright side, Leafs fans: Today is the two-month anniversary of your last non-shootout win over a playoff team.

4. Arizona Coyotes (20-30-7, minus-60) Newly acquired Mark Arcobello’s goal on Friday made him just the second player in NHL history to record points for four teams in the same season. You know what that means: They need to trade him.

3. Carolina Hurricanes (19-28-7, minus-27) Did I flip the Canes and Coyotes just to avoid having the exact same bottom five three weeks in a row? I cannot confirm nor deny.

1. Buffalo Sabres (16-37-3, minus-89) With last place all but clinched and one major trade already in the books, we’re apparently now into the “Ted Nolan firing watch” portion of the season.

And now we get to the sellers. The Leafs are clearly in that category, and they still have a few useful pieces they’d like to move. The Sabres will trade anyone, but they are starting to run out of attractive pieces (although we’ll probably finally get that Chris Stewart deal that’s been more than a year in the making). The Oilers have some rentals to offer, most notably Jeff Petry, and apparently they haven’t closed the door on moving a piece of the young core like Jordan Eberle.

The Hurricanes haven’t made a major move yet but say they plan to be “fairly active.” It doesn’t sound like Eric Staal wants to move, and they’re unlikely to find a taker for Cam Ward or Alexander Semin, but they should at least be able to get a good return on defenseman Andrej Sekera. He’s a pending unrestricted free agent and could be the most attractive blueliner left on the market. The Coyotes have also been quiet but are expected to move Antoine Vermette if they can’t get him signed. They’ve also got some bigger names they could choose to move, including Keith Yandle and maybe even Oliver Ekman-Larsson. Either of those two would fetch a major return, but both could still be part of Arizona’s long-term plans.

You’d assume the Blue Jackets and Devils will be selling, and New Jersey’s Jaromir Jagr will obviously be a fun name to watch. And then you get to the Eastern teams that are out of the race but close enough to the bubble that they could be in denial. That would include the Flyers and the Senators, and both could go either way. Ottawa’s Craig Anderson is hurt but should be back soon, and he could be the most attractive goalie available if the team decided to move on and finally hand the starting job to Robin Lehner.

By my count, that’s as many as nine potential sellers, and a team like Colorado could make it an even 10 if it falls out of the Western race over the next few days. That should be enough to keep things busy.

• The hockey world got some tough news yesterday, with the passing of longtime NHL defenseman Steve Montador.

• The Stars will be without Tyler Seguin for three to six weeks after this low hit by Florida’s Dmitri Kulikov. That puts a major dent in the Stars’ wild-card hopes, not to mention ending Seguin’s chances at the Art Ross and Rocket Richard trophies. As for Kulikov, he was offered an in-person hearing with the department of player safety, meaning a long suspension is probably coming.

• The Kings stayed hot, winning their fourth straight with a 3-1 decision over the Capitals on Saturday. But they didn’t gain any ground in the wild-card hunt, as the Jets, Flames, and Wild also won.

• Alexander Ovechkin’s four points powered the Caps over the Ducks last night, and Washington is now just five points behind the Islanders for the top spot in the Metro.

• The eighth-place Bruins have dropped three straight. But the Panthers haven’t gained much ground, losing three straight of their own, including last night’s 2-1 overtime loss to the Blues.

• Jimmy Howard returned to the Red Wings’ crease for Saturday’s shootout loss to the Jets. He’d missed about five weeks after injuring his groin.

• Scratch one name off the deadline tracker: Senators winger Chris Neil broke his thumb against the Oilers on Saturday.

• Montreal’s P.K. Subban played more than 35 minutes in Saturday’s win over the Maple Leafs, the highest total in the league this season.

• Finally, a weird situation occurred in yesterday’s Blackhawks win over the Penguins, as Sidney Crosby was whistled for a tripping penalty that was then reversed after the officials got together. Picking up the flag may be common in the NFL, but it’s extremely rare in hockey. I’d like to see more of it — in this case, the original call was clearly wrong — but now the league has to be willing to do it for players other than Crosby.