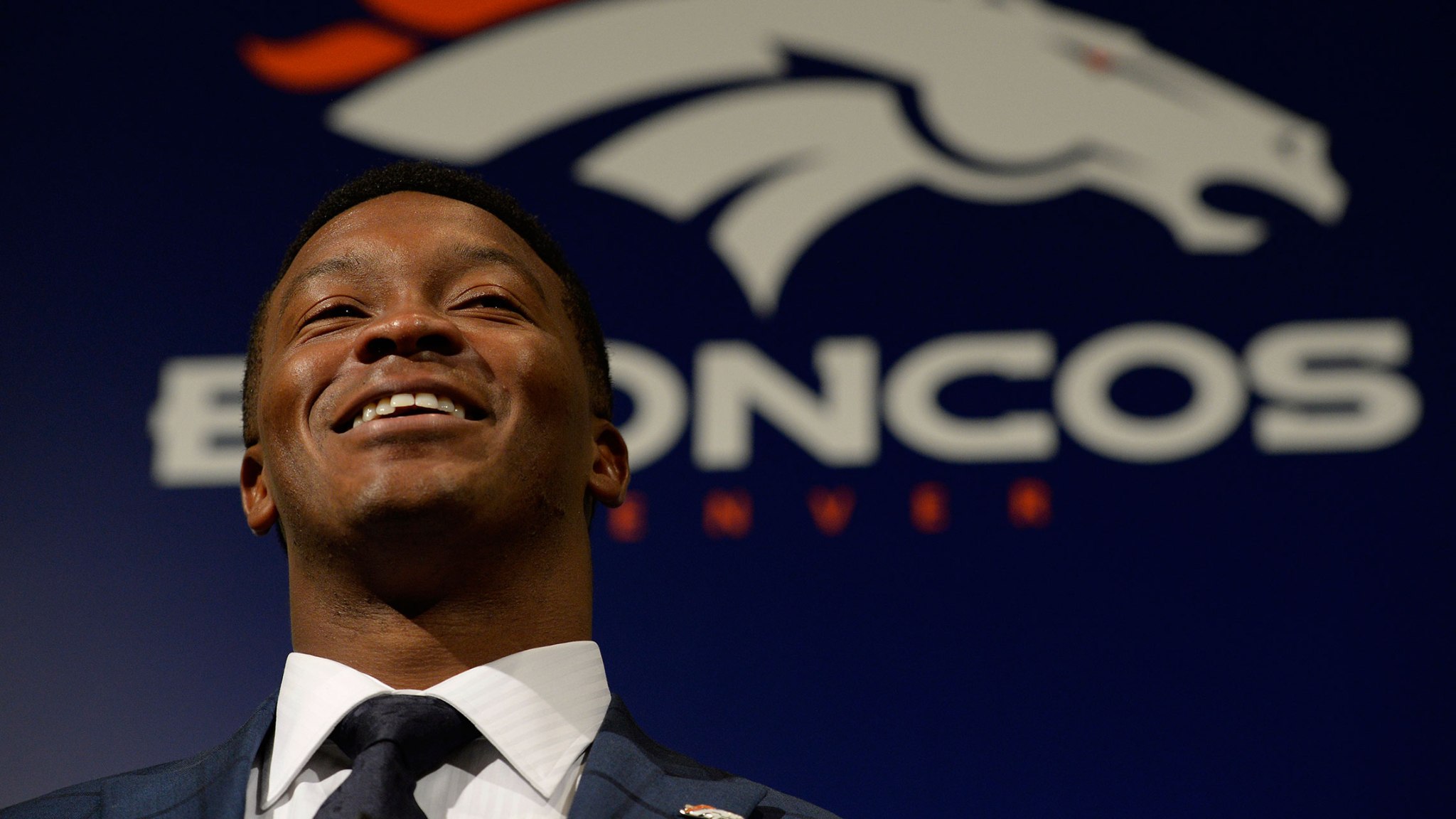 Each year, contract extensions and free agency redefine how the league values different positions and skill sets. But with the absurd amount of talent from both the 2010 and 2011 drafts, we’ve seen an especially high number of young players signing big-money deals over the past 12 months.

Patrick Peterson paced the cornerback market a full 20 months before he would have hit free agency, J.J. Watt got his $100 million extension a year and a half before he could reach the market, and Gerald McCoy got his seven-year deal less than halfway into last season. And those deals for Watt and McCoy suggest something we probably already knew: The ability to get after the quarterback is king.

This offseason all but confirmed that, as Justin Houston and Ndamukong Suh got more than $112 million guaranteed combined. The size of the number becomes even starker when you consider that the pass-rushing pair received about $25 million more than the sum of the deals Demaryius Thomas and Dez Bryant signed last week.

So, why the (comparatively) low deals for two of the premier pass-catchers in the league? First, it’s reasonable to hold up both Suh and Houston as the best players at their positions. Suh’s consistency — the man plays an absurd number of snaps every season — gives him a slight edge on McCoy at defensive tackle, and Houston’s production over the past three seasons gives him an advantage over every other edge player.1

The second reason is simply about positional value. While Bryant and Thomas were set to earn $12.83 million on the wide receiver franchise tag this year, the average of the defensive end and linebacker tags — which is really what Houston should be worth — would come out to $14 million. Ultimately, the gap between what Houston got long-term from Kansas City and the nearly identical deals Thomas and Bryant got to stay with their teams is even larger.

The State of Wide Receiver Value

The only receiver who has a deal like Houston’s or Suh’s is Calvin Johnson, who got his gigantic seven-year extension in the spring of 2012, when he was coming off a 1,681-yard, 16-touchdown season. While Johnson’s $20.56 million cap hit this year definitely contributed to Detroit’s inability to re-sign Suh, his deal, coupled with a slight decline in production last year, hasn’t necessarily made other teams cautious. He got the contract because he’s Calvin Johnson, and no one else is.

Megatron’s contract, with its $53.3 million in guarantees, reset the market for wide receivers just a year after Larry Fitzgerald got an eight-year extension with nearly $50 million in guaranteed money. Although Johnson’s deal hasn’t functioned as such, Fitzgerald’s contract situation did provide something of a cautionary tale when it came to handling Bryant and Thomas. His scheduled 2015 cap hit of $23.6 million wasn’t tenable for Arizona but it also wasn’t guaranteed, so the Cards scrapped the 31-year-old’s mega-contract and gave him a new two-year, $22 million guaranteed deal.

Beyond those two top-end deals, a couple of smaller ones have had an effect on the market, too.

The Steelers have made plenty of silly choices when it comes to money over the past few years, but they should get some sort of medal for how they handled Antonio Brown’s contract. It was clear from Brown’s first preseason that he was going to be a nightmare with the ball in his hands, and Pittsburgh wasted no time making sure he’d be around for a while. Brown signed his five-year extension after just two seasons, a $41.96 million deal with an average salary about two-thirds as high as Mike Wallace’s five-year, $60 million deal. It’s no surprise that Brown’s been vocal about wanting a new contact.

Then there are the two guys who knew they were re-signing on the cheap: Jordy Nelson’s four-year, $39 million deal with the Packers is a freaking coup, and Randall Cobb’s four-year, $40 million deal is a steal of just a slightly lesser magnitude.

With Nelson and Brown on such team-friendly deals, two of the best five receivers in football are making considerably less than they’re worth. And since teams and agents have likely conceded that only Calvin Johnson is Calvin Johnson and that the Wallace contract was a mistake from the start, it all made defining the market for Bryant and Thomas difficult. Ultimately, their identical-in-almost-every-way-and-not-at-all-suspicious five-year, $70 million deals seem to put their landing point at “a notch below Johnson and a notch above that probably-shouldn’t-count Wallace deal.”

Next year, three more big-name receivers will hit the market, and now the Bryant and Thomas contracts, along with Jeremy Maclin’s free-agent deal with the Chiefs, will serve as the benchmarks.

We’ll start with T.Y. Hilton. Since he came into the league in 2012, Hilton’s been remarkably productive. He caught 50 passes as a third-round rookie, and over the past two seasons, he’s truly taken over as the no. 1 target for Andrew Luck. Since the merger, only eight players in NFL history have more yards through their first three seasons. That list includes Randy Moss, Jerry Rice, Torry Holt, Isaac Bruce, and Sterling Sharpe. There are worse groups of which to be a part. Hilton’s main issue is one that plagues a lot of receivers generously listed at 5-foot-9: He just doesn’t find the end zone very much. For context, Hilton has only three more touchdowns in his career than Bryant had last season. Despite being targeted 131 times, Hilton only scored seven touchdowns last year; among players with at least 100 targets, that was tied for 18th.

Hilton’s main value — which is a very real one — is being able to take the top off a defense, and at this point, the same can be said for Maclin. Except for Maclin’s three-touchdown advantage, the two had almost identical numbers last season. Maclin had three more catches on 12 more targets, and Hilton averaged about one more yard per catch. Maclin’s spotty injury history and the fact that he only put up those numbers for a single season hurt him in negotiations, but when Hilton gets his deal sometime in the next nine months, it wouldn’t be that surprising to see him end up closer to Maclin’s five years and $55 million (with maybe a bit more than the $22.5 million in guarantees) than the numbers for Bryant and Thomas.

Going back to that list of players with the most receiving yards in their first three seasons, it’s probably worth mentioning that A.J. Green isn’t just on it. He’s no. 2. Green averaged 87 catches for 1,278 yards and 10 touchdowns in those first three years. It’s arguably the best three-year start for any receiver in history not named Randy Moss, and Green did it with Andy Dalton as his quarterback.

That’s where Green differs from all the other top wideouts in his peer group. Tony Romo, Peyton Manning, Andrew Luck, and Matt Ryan aren’t walking through that door in Cincinnati, and for the most part, that’s done nothing to keep Green from keeping pace with every one of his peers. With the seasons that guys like Bryant, Thomas, Brown, and Nelson had last year, it’s easy to forget just how recently the “best wide receiver” conversation was boiling down to just Green and Johnson. One hobbled season — in which he still topped 1,000 yards and averaged more than 80 yards per game — probably shouldn’t be enough to send Green tumbling from the conversation, either.

Unlike Bryant and Thomas, Green will play the final year of his contract near the top of the new rookie salary scale. As the fourth overall pick in 2011, Green is scheduled to make $10.176 million in the last year of his deal. With the salary cap set to rise and franchise tag valuations along with it, Green would make about $14 million if the Bengals franchise him, according to cap expert Joel Corry. If he signs a long-term deal, he’d hope to be making something close to that number per year, which would add up to a more lucrative deal than either Bryant or Thomas just received. Based on what he’s done for most of his career, he’s not wrong in thinking he deserves it. People seem to be sleeping on Green after a down year, but I can guarantee you defenses won’t be, and I’m sure he’s ready to rebuild his worth after last season.

Even if Green can surpass the deals handed out last week, there’s still a chance he won’t even set the bar in the non-Calvin wide receiver market. Julio Jones was taken two picks after Green in 2011 and will make the same $10.176 million as Green in 2015 unless the Falcons can get his new deal done before the season starts. Jones shared Hilton’s end-zone allergy last season (six touchdowns), but his 104 catches and 1,593 yards were both tops in the NFC. When it comes to arguing about the most physically imposing non–Calvin Johnson wide receivers in football right now, you can’t really go wrong with either Green or Jones. While he obviously has the advantage of playing with Ryan, what Jones did last season surpasses any single year Green has put together.

For both Atlanta and Cincinnati, it would be beneficial to get deals done before this season begins. Right now, the Bengals can negotiate based on the 2014 version of A.J. Green, which probably gives them their best chance of pointing to the deals handed out last week and confidently saying that’s the class in which Green belongs. The situation with Jones is a bit different, but the intentions for Atlanta should probably be the same. All signs point to Jones having a monster season with Kyle Shanahan in charge of an offense still led by Ryan, and another healthy season puts more time between Jones and his foot problems. Both of the receivers picked to alter franchises in 2011 have done just that, and it would benefit both teams to lock them up before their prices justifiably get any higher.