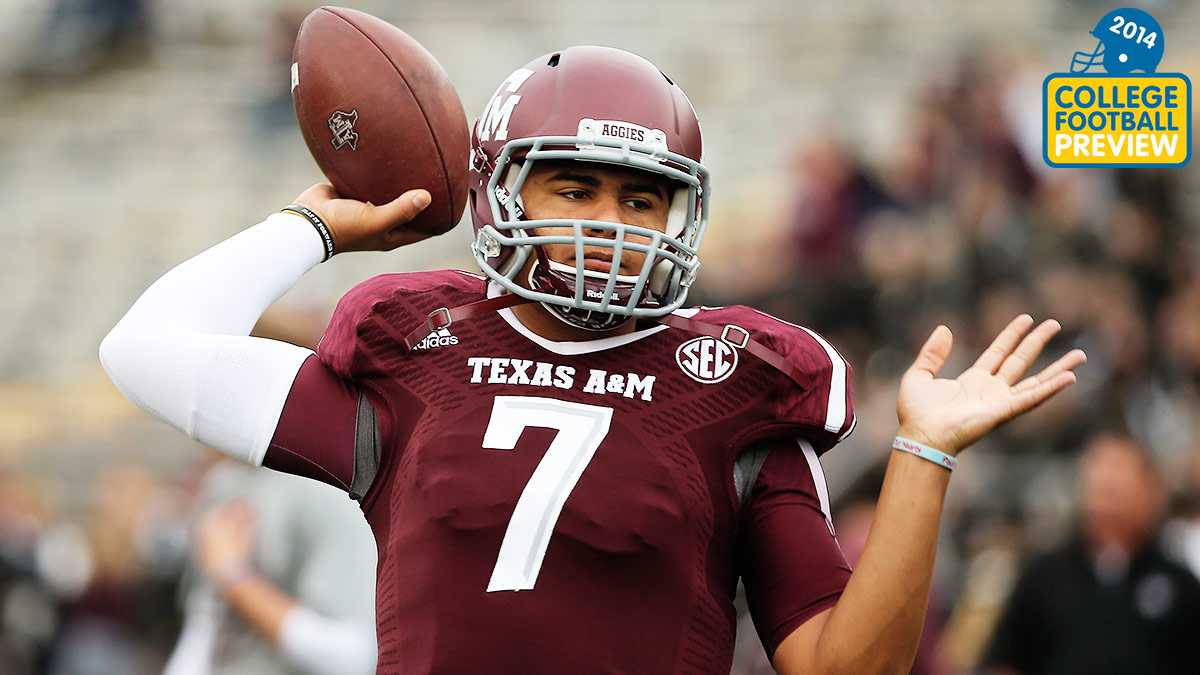 As a rule, the brightest college football stars shine briefly, then move on, ceding the stage to new stars who shine equally brightly and equally briefly, and so on. Even among the stars, though, few if any have been more interesting or downright fun to watch than Johnny Manziel, who played with such reliably freewheeling panache at Texas A&M that even long-suffering Cleveland Browns fans are giving themselves permission to bask in the glow while they still can. The amazing Manziel, who could turn a disaster into a dagger. Who elicited awe even in the process of losing the biggest game of the year. Who broke every rule, said to hell with the odds, and almost always came out unscathed. Recently, my editor told me that around the Grantland offices, a few of the less die-hard college fans have expressed concern that Manziel’s absence will leave an excitement void so large it cannot be filled.

Yes, technically Henry is a relatively unproven sophomore stuck behind an All-SEC pick, T.J. Yeldon, who has topped 1,000 yards each of the past two seasons and will not be yielding first-string status as long as he’s healthy. Despite his consistency, though, Yeldon has never generated the kind of buzz that Henry did on the heels of a breakout night in the Sugar Bowl, when he treated America to the spectacle of a 6-foot-3, 241-pound freshman loping with impunity through the Oklahoma secondary for a pair of long touchdowns (one rushing, one receiving) in the second half. (Given his size, the acceleration Henry showed to split the safeties on his second score was truly terrifying.) Alabama fans, of course, knew what they had already, having watched Henry leave much smaller Arkansas defenders in the dust back in October:

In all, Henry touched the ball 37 times on offense last season, averaging just south of 12 yards. Again, this is the backup we’re talking about, which hardly seems fair or sustainable.

Offensive production has been on the rise in general, but arguably the single greatest development for the viewer over the past decade has been the emergence of the huge-yet-graceful deep threat, the long-limbed, small-forward types who hover effortlessly over helpless defensive backs like sticky-fingered pterodactyls. Pitt’s Larry Fitzgerald was the prototype. Michigan’s Braylon Edwards, Georgia Tech’s Calvin Johnson, and Texas Tech’s Michael Crabtree refined the mold. Last year, Texas A&M’s Mike Evans was the poster boy.

This year, no college receiver will fit the template better than redshirt junior Strong, who used his 6-3, 212-pound frame to dynamic effect in 2013, catching 75 passes for 1,122 yards and seven touchdowns in his first year out of junior college. His quarterback, Taylor Kelly, doesn’t possess an NFL-caliber cannon for an arm, but every throw he’s able to place in Strong’s general vicinity will be a highlight waiting to happen.

On the opposite end of the spectrum, there’s Lockett, an undersize technician who creates swathes of open space with precise routes and rare quickness. (Watch the double move he put on a poor cornerback from Oklahoma last November for his second of three long touchdown catches in the first half.) The then-junior was at his best in 2013 against K-State’s best opponents, racking up a combined 773 all-purpose yards (515 receiving) in regular-season losses to Texas and Oklahoma and closing with three touchdowns in a high-profile pantsing of Michigan in one of the bowl games whose titles I can’t bring myself to type.

His absence was almost as convincing: With Lockett on ice in midseason losses to Oklahoma State and Baylor, K-State finished with its two worst passing performances of the season.

Bruins coaches continue to insist that Jack is a linebacker, period, no slash required. Which, OK, fine: Jack’s NFL future is clearly on defense, and he’s widely projected as one of the top two or three college linebackers this season after a gonzo debut as a true freshman in 2013.1 Seriously, though: How long can the Bruins afford to keep the ball out of their most gifted offensive weapon’s hands? In a limited, strictly experimental role last November, Jack rushed for 267 yards and seven touchdowns on just 38 carries, including a highlight-reel run at Arizona that cemented his reputation as a two-way force.

The Bruins never settled on a full-time, feature back in 2013 — quarterback Brett Hundley ultimately led the team in rushing, even after subtracting negative yardage on sacks — and none of the other candidates left anywhere near as lasting an impression as the part-timer as Jack. Just give him the damn ball.

Inspired by Jack2, the new coaching staff in Seattle added its best defender to the tailback rotation this spring and struck gold. Like Jack, Thompson is the centerpiece of his defense, having racked up 152 total tackles as a freshman and sophomore while playing a hybrid outside linebacker/nickel role; unlike Jack, Thompson has also seen regular snaps on offense in the preseason, and hasn’t downplayed the likelihood of a two-way role.

In high school, Thompson was a local legend with the ball in his hands, rushing for 3,000 yards and 40 touchdowns over his last two seasons, and was subsequently feted as one of the top incoming recruits in the 2012 class regardless of position. As a junior, he’s on schedule to fulfill the hype.

It’s going to be a long time before another college lineman matches Jadeveon Clowney’s outrageous combination of size, ferocity, and hype, but Gregory might come as close as anyone this season. As a pure edge rusher, Gregory was as disruptive in 2013 as any lineman in America: One year removed from breaking his leg in junior college, he led the Big Ten in sacks (9.5) and was credited with 15 quarterback hurries in his first year on campus. He also flashed enough versatility to line up at multiple positions. And unlike Clowney, he can also be an asset in pass coverage.

Another season like that, against a steady diet of double-teams, and Gregory will have a legitimate chance to follow Clowney as the no. 1 overall pick in next year’s draft.

Diggs missed the last six games of 2013 with a broken leg, so here’s a brief refresher from his freshman season in 2012:

Here are the numbers, if you’re the studious type, and an obligatory reminder of the messianic expectations that preceded Diggs’ arrival two years ago. Whatever. That move at the 0:16 mark is pretty obviously all you need to know.

No individual player outside of the “Power Five” conferences projects as the next Colin Kaepernick, or even the next Dri Archer. And let’s be real: After dropping five games in 2013 and losing its program-defining head coach, Boise State is not quite the giant-killing draw it was a couple years ago. If you get a chance to catch the Broncos, though — and you will, because they’re scheduled to play three nationally televised games on Thursday and Friday nights, including the opener against Ole Miss — you won’t regret being able to say you were into Jay Ajayi before Jay Ajayi was cool.3 With 1,425 rushing yards and 18 touchdowns to his credit as a redshirt sophomore, Ajayi is by far the most productive returning back in the Mountain West, and ranks fourth among returning FBS backs in both total rushing yards and yards per game. He’s not necessarily a punishing runner, but he rushes with abandon and generates substantial yards after contact due to his exceptional balance. Barring injury, or the unexpected collapse of the offensive line, Ajayi is on track to deliver the most prolific rushing season in school history.

Feel free to ignore the unfair, over-the-top comparisons to Adrian Peterson, a target even the most celebrated recruit in the nation cannot be expected to hit. Still, you don’t have to go that far back for proof that a five-star freshman can make an immediate mark in the SEC, much less back to Bo Jackson or Herschel Walker: In the past four years alone, five different SEC backs (Marcus Lattimore (2010), Michael Dyer (2010), Todd Gurley (2012), Yeldon (2012), and Alex Collins (2013), all of whom were regarded as blue-chip prospects) have justified the hype with 1,000-yard debuts straight out of high school.

Like all of the above, Fournette arrives with the requisite size (6-foot-1, 230 pounds), speed, and man-among-boys physicality, as recorded on melodramatically scored highlight films filled with reluctant teenage tacklers opting for survival over dignity. For now, SEC defenses seem less of an obstacle to Fournette’s ascension than LSU’s loaded depth chart. But even the Tigers’ veteran backs are already talking like it’s an honor just to have their names listed next to his.

You may have noticed we’ve made it to the end of the list without a single quarterback, in part because the obvious suspects (Jameis Winston, Marcus Mariota, Braxton Miller, et al.) have all had more than enough written about them already, and in part because, considerable talents notwithstanding, none of those players possess Jonathan Football’s gift for theatrical spontaneity. They tend to stick to the script. If there’s any player in America who best fits the Manziel mold, any barely-six-foot scrambler likely to ascend into the ranks of elite quarterbacks from a standing stop, it’s the guy who is literally replacing Manziel: sophomore Kenny Hill.

As a true freshman in 2013, Hill attempted 22 passes, all in garbage time. Now, after beating out true freshman Kyle Allen for the starting job, he inherits an up-tempo, QB-friendly system that not only produced the progenitor of this list, but also the most prolific passer in NCAA history, Case Keenum, who thrived under A&M coach Kevin Sumlin when Sumlin held the top job at Houston. (As an assistant, Sumlin has also worked to various degrees with Drew Bledsoe at Washington State, Drew Brees at Purdue, and Sam Bradford at Oklahoma.) Given the dearth of proven passers in the SEC, Hill is as good a bet in August as anyone to earn all-conference honors come December — and to thrill us all along the way.

The NHL’s Race to the Bottom