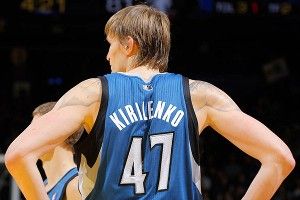 In Russia, Andrei Kirilenko says, there’s an old maxim about changing jobs every six years. He’s not sure where it comes from, but since 2008, it’s applied to even the office of the Russian president. It doesn’t matter who you are — six years, and it’s time for something new.

Maybe it’s that idea that makes Kirilenko describe his time in Utah as an overachievement, perhaps even an overstaying of his welcome. Today, there are 49 active NBA players who debuted in or before Kirilenko’s first season (2001-02), and in that span, those players have played for an average of 4.7 teams. Kirilenko was permitted 10 seasons in Utah, 726 games in the same uniform, and 711 of them for the same boss, Jerry Sloan.

By the end of Kirilenko’s days in Salt Lake City, his stay had spoiled. When he returned to the NBA after spending last year’s lockout-shortened season in Russia, it had to be somewhere new. The Jazz had moved on, and Kirilenko knew it was time for him to do the same.

When he got to Minnesota, there was, as there is with any new job, a process of feeling out his role. In defining it, Kirilenko has adopted a new favorite word: helpful. It’s how he describes his play, his goals, his basketball ethos. He has no driving urge to score, no real desire to lead the team in any category. He just wants to be helpful, he says, over and over. He wants to grab a rebound here, help on defense there, maybe take a shot if he’s really, truly the best option.

It’s not that his approach is unique — plenty of players share it — but the way he describes it is so pedestrian. Helpful. That’s all.

And helpful he’s been.

In Utah, Kirilenko was entrenched in Sloan’s basketball order, one that he now describes as something of a machine. “Everything we’d do on the floor was planned,” he says. “Like, it’s … a mechanism. You go this way. He’s going this way. If the pass goes this way, you go this way.” Since joining the injury-ridden Timberwolves, Kirilenko has embraced Rick Adelman’s freewheeling system and has used it to become one of the few bright spots in what looks to be another lost season in Minnesota.

At 31, he’s posted numbers not all that different from those he logged in 2005-06, at the height of his career. His 18.2 PER is tied for his best since that season, and his 51.0 shooting percentage is the highest of his career. Add that to the 13.3 points, 6.3 rebounds, and 3.0 assists he’s averaging, and Kirilenko could be 25 again. “He’s definitely a coach who gives you more freedom and … creativity,” Kirilenko says of Adelman. “He’s holding you accountable for your decision. But you make the decision.”

Take the Timberwolves’ fifth game of the season, against the Pacers on November 9. With the game locked up at 94 and four seconds remaining, Adelman called a timeout and drew up a play in which Luke Ridnour was to inbound the ball to Kirilenko. If the shot was there, it was his to take.

When Kirilenko took the pass, the look was there. It just so happened that Chase Budinger’s was better. Kirilenko took one glance toward the basket before he saw Budinger cutting in from near the 3-point line. A painfully easy layup followed, and that was that. The plan worked, mostly because the plan was scrapped.

“There are times, offensively, I’m not sure what he’s doing,” Adelman said in November. “He’s all over the place. But the effort he gives … you’ve got to give him freedom.” There really is no other choice, and now, several months into the season, the novelty has worn off, and Adelman has an even better grasp on Kirilenko and his flights of basketball fancy.

On a team so injured that it’s been temporarily granted a 16th roster spot, Kirilenko has been one of the few players Adelman can consistently count on. Other than missing four games with back spasms, Kirilenko’s been healthy and able to play 40 minutes a night if needed. He’s also taken on a good portion of the scoring load, to the point that he’s become more of an offensive player than the defensive weapon the team envisioned he’d be. Through the Timberwolves’ first 45 games this year, they’re averaging 1.02 points per possession with Kirilenko on the court, 0.99 without him; conversely, they’re giving up 1.02 with him and 1.03 without him. That’s largely the result of so few scorers on a depleted team, and, as always, Kirilenko is adapting. Some nights, that means looking for that shot a bit more, no matter how much it might pain him to do so. After all, it’s the most helpful option.

Look around the Target Center, and there are too many reminders of Kirilenko’s age. There’s rookie Alexey Shved, his Russian teammate who’s eight years his junior and remembers the already-famous Kirilenko signing a poster for him when Shved was just a preteen. There’s Quincy Lewis, picked by the Jazz five spots before Kirilenko in 1999, whose career in the NBA and overseas is already over, and who now works the Timberwolves’ pregame and postgame shows. There’s Mark Jackson, another former teammate, who comes to town as the Warriors coach and regales reporters with tales of his and Kirilenko’s special play, called “spasibo,” which means “thank you” in Russian.

But this is hardly AK-47’s farewell tour. Just look at those numbers — numbers that haven’t changed. Not ever, really. “From one side, yes, great, you’re consistent,” Kirilenko says. “I always try to be consistent. That’s my goal for the duration of my career. But some of the people would say, ‘He’s not improving.’”

At this point, so what? Improvement doesn’t matter much when you’re pushing 32. It shouldn’t be ignored that Kirilenko played with Karl Malone and John Stockton, and that however much he looks like a spindly 19-year-old, he made his professional debut in 1997. When Minnesota does get healthy, whether it’s this year or next, the organization would be wise to rely on Kirilenko’s consistency rather than to squander it on too many 40-minute nights and too much pressure to score. If this season has proved anything, it’s that Andrei Kirilenko, done right and given his freedom, is an utter delight. Now, 11 seasons and two teams into his NBA career, he’ll change jobs again when he damn well pleases.