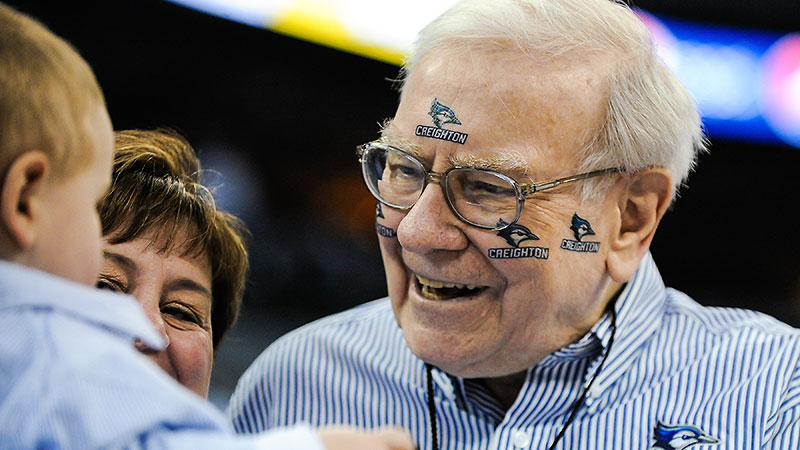 Warren Buffett will give you $1 billion if you pick a perfect bracket for the NCAA men’s basketball tournament. That’s billion with a “b” and nine zeros, a stack of $100 bills so tall it would stand almost three times as high as the Empire State Building. Even Floyd Mayweather would notice that much cash.

So, what are the odds of winning this contest? Well, even if you employ the finest bracket-picking strategies, your chances will still be worse than the odds that a basketball dropped at random on the United States will land in Butler’s half of the court at Hinkle Fieldhouse.

Buffett cut his teeth in insurance, a business that requires estimating the odds of rare events like Hurricane Sandy. He knows how unlikely it is that any of the 15 million brackets allowed in this contest will be perfect, although he’s declined to share his specific calculations.

Moreover, Buffett isn’t some investment dork who’s never seen a basketball game. He reportedly has a shrine of sports memorabilia in his office, including helmets signed by Bo Schembechler, Tony Dungy, and Tom Osborne. His letters to investors contain sports analogies such as “our insurance operations shot the lights out last year.”

Buffett knows what he’s doing. Do you? Here’s a statistical exploration of how slim your odds will really be if you choose to submit a bracket before Thursday morning’s deadline.

The most common estimate floating around is that each contestant has a 1-in–128 billion chance of picking a perfect bracket. There are two problems with that figure, though.

First, the 1-in–128 billion calculation assumes a bracket in which the higher seed always wins. (The Final Four games are picked at random among the four 1-seeds.) But only people with no interest in upsets (and hence no soul) would possibly fathom such a strategy. The tourney has never looked so neat and orderly, and so sports fans never fill out their brackets that way. Last season, 9-seed Wichita State made the Final Four and nearly beat eventual champion Louisville.

Jeff Sonas and Mark Glickman, two of the organizers of the Kaggle data competition for the tournament, have redone the calculations for a bracket in which the higher seed always wins. They got odds of 1-in–99 billion. Think of 99 billion as the number of years you’ll have to wait until this strategy produces a winning bracket; scientists estimate the age of the universe at 13 billion years.

There are multiple problems with this approach. For starters, it assumes that a 16-seed has no chance to beat a 1-seed, since it’s never happened before. However, there are no guarantees in sports. Each 16 seed has a small probability to pull off the unthinkable.

What’s more, win probability by seed ignores the identity of each team and the full regular season’s worth of games we can use to evaluate each squad. Many number crunchers offer their predictions based on season-specific data, including Nate Silver and Ken Pomeroy. I do the same at my website, The Power Rank.

The problem with picking a perfect bracket is the sheer number of possible brackets. If you filled out every possible bracket on a different sheet of paper, the stack would extend well past the edge of our solar system.

Buffett wouldn’t miss the money if he had to cough it up. But is there any way he will have to? To explore the odds more fully, I developed a model based on the historical win probabilities by seed. For each game, the model gives a win probability based on the difference in seeds in a given matchup. To fill out a bracket, pick the winner of each game at random according to this probability. For example, the tourney features 6-seed Baylor against 11-seed Nebraska. The model would pick Baylor in 70 percent of brackets, but Nebraska in the others.

There’s no proof, but let’s assume this system leads to better results than Grandma’s random guesswork. If we go back and generate 15 million brackets this way for 2013, we have a 1-in–4.5 billion chance of getting a perfect bracket. That’s about the same likelihood that a Kardashian has of a successful marriage, but it’s better than 1-in–128 billion. Last year’s tourney was a bit of anomaly, though, as 9-seed Wichita State made the Final Four along with two 4-seeds in Michigan and Syracuse. Florida Gulf Coast, a 15-seed, won two games to advance to the Sweet 16. These types of upsets make it even more difficult to pick a perfect bracket.

Over the last 10 seasons, Buffett would have come closest (1-in-61,593) to paying the $1 billion in 2007. That year, Florida won its second consecutive title, and the tourney contained few upsets overall, as a team seeded two or more spots below its opponent won only four times. UNLV, a 7-seed, was the lowest seed to make the Sweet 16.

On average over the last 10 tourneys, Buffett would have had about a 1-in-590,000 chance of paying $1 billion to someone using this bracket selection method. And even that is incredibly optimistic.