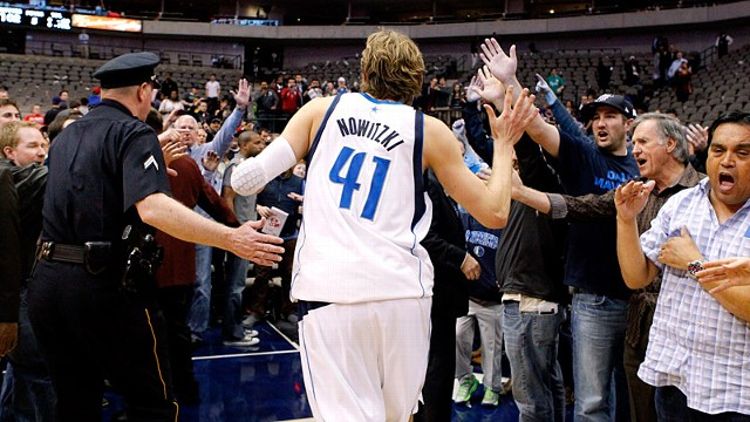 Robert Mays: Well, don’t look now (actually, you probably should look), but the Mavericks are coming. Dallas is 10-4 in March, and with last night’s OT win against the Clips, the Mavs are a game behind the Lakers for the last playoff spot in the West.

Last night’s Dirk performance was just the latest step in an upward trend that would make any team that draws Dallas in the first round a bit uneasy. After missing most of the first two months of the season, Nowitzki’s gone from 16.9 points on 44.2 percent shooting in January to 18.9 on 52.9 percent in March. His 33 last night were a season high, and they came on 21 shots — another season high. Just as the Mavs need Dirk to be Dirk, he finally can be.

Mays: Nowitzki’s 33 points were matched by Paul, who, shockingly, was the entirety of the Clippers’ offense down the stretch. Ten of Paul’s 33 points came in the fourth quarter as he managed to keep pace with the Mavs and send the game to overtime. Yesterday on Grantland, Zach Lowe detailed how the Heat’s success has been aided by a newfound creativity on offense. Because what they’re running isn’t evident too far in advance, it’s hard for teams to position their defense early in the possession. So it’s like the Clippers’ offense, only the opposite.

Eventually, Rick Carlisle began sending an extra defender Paul’s way each time the ball crossed half court, and with their point guard double-teamed, L.A. struggled to score. From the 6:37 mark of the fourth quarter until there were eight seconds left in overtime, no other Clipper made a field goal. They lost, by the way.

Chris Ryan: Do you guys ever wonder whether this life … our whole universe … is just some dream J.R. Smith is having in between planning his next tattoo (full back piece of Led Zeppelin’s Physical Graffiti), drinking yerba maté, and shopping for Workaholics novelties on Etsy? No? Just me? J.R. had a great Tuesday night. He scored 32 in New York’s 100-85 road win over Boston, said something patently untrue about the world (“When we get out and run, no one can really run with us”), and saw this wonderful T-shirt come into the world (h/t to @mdotbrown and @netw3rk for spotting this).

Mays: Mayo went 5-for-15, but his dedication to Dallas’ beard gimmick doesn’t show up in the box score. Dirk’s is no. 1, but O.J.’s approaches Mike Woodson levels of fullness, and it leaves him without fear. His baseline, left-hand finish to send the game to overtime was a thing of beauty.

Mays: I’m trying to figure out a TV Guide description of a movie about Vinny Del Negro’s life.

Ryan: Is it a drama or comedy?

Ryan: Because either way it should be about a Men’s Wearhouse suit salesman who moonlights as a singer in a tiki lounge.