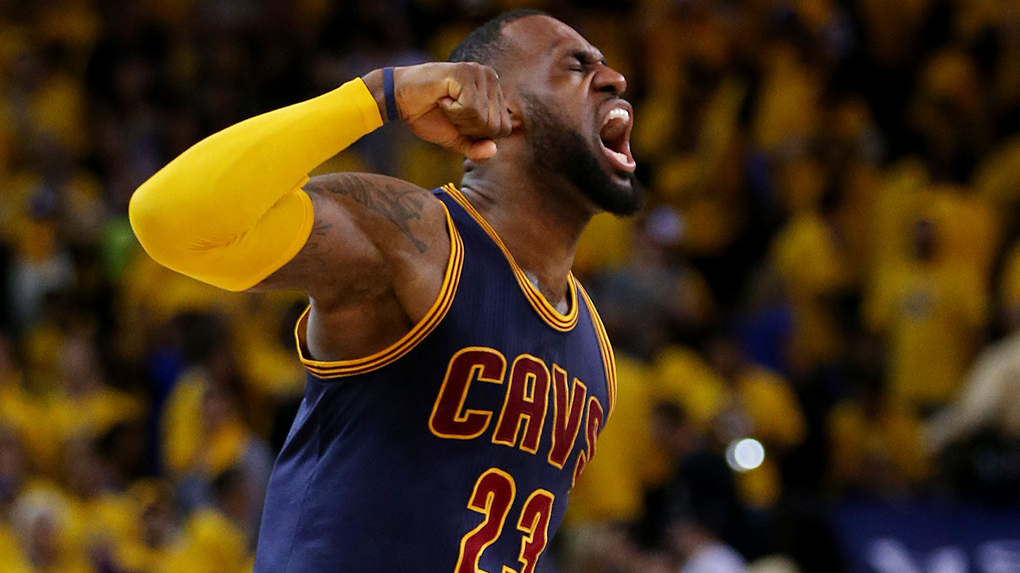 Jason Concepcion: Serious question for the serious NBA fans: When did you stop imagining yourself as The Hero? The last-shot taker, the one with the ball as the seconds tick down? Like, what age? When did you stop wheeling around your house in the afterglow of a great game, miming jumpers at shadows, making crowd noises by exhaling with your mouth agape? You know, the Gatorade “Be Like Mike” commercial thing. When does one stop doing that? I kind of think the answer is never. Sure, the burdens of adulthood might cause you to temper your more flailing aspirational gesticulations, especially in public. But if you’re a sports fan, when you’re in your secret daydream places, you never stop lacing up your imaginary sneakers.

I got to thinking about this because, as I was pacing my living room, barely able to stand the tension of a game between teams in which I have no rooting interest, a cacophony of shouts came bouncing down the brick-lined alley that my window looks out on. Then all of a sudden LeBron James was on my television screen, roaring soundlessly, having just spiked the ball after putting up a 39-point, 16-rebound, 11-assist triple-double, the second-highest-scoring triple-double in Finals history behind Jerry West.

All I could think was the same thing I’ve always thought while watching great basketball games: What must that feel like?

Game 2 was an instant classic, turning even the most cynical NBA fans into the mirror image of their gibbering, balled-up-tube-sock-jump-shooting inner children. It was that special kind of game that became more dramatic as the players played worse. James scored his 39 on an inefficient 35 shots, at 31 percent shooting. Steph Curry shot 5-of-23, his jumper spraying so wildly astray that it probably had Lil B frantically rechecking his spellcasting manual. Bacchus himself groaned as J.R. Smith committed three idiotic, near-fatal clutch-time fouls.1

I don’t think the Cavs, in their current state of injury-riddled ruination, can win this series. But I thought they’d get blown out in Game 2, and that’s part of why the game is already a classic.

Matthew Dellavedova Is Your God Now

Andrew Sharp: Steph Curry is the most beautiful basketball player on the planet. He finds space that doesn’t exist to drain jumpers that take your breath away. He goes behind his back to hit wide-open teammates. He wiggles through entire teams and makes teardrop layups look cooler than dunks. He makes it look effortless, gorgeous. And none of it mattered in Game 2.

Matthew Dellavedova probably has the ugliest game of any guard in the league. In the first half, I saw him take a 3 and blurted out, “God … that’s really what his jumper looks like, huh?” There’s a hitch at the top that looks like a video-game glitch. Sometimes he’ll crash into the lane and throw an alley-oop to nobody. He does that at least once every game.

Matt Dellavedova, this may seem a tad harsh, could be the worst player ever in a Finals to get major minutes.

He’s just missing the point. Talent is never all that matters in the NBA Finals. Fringe players are part of any title winner’s formula. Remember Eddie House with the Celtics? Or Trevor Ariza with the Lakers? Or Mike Miller turning into a god for the Heat? As soon as I found out the team bus left without him after Game 1, I was bracing for a big Delly night in Game 2. It was too perfect.

Fast-forward 72 hours: Dellavedova harassed Curry all night — Steph went 0-for-8 from the field and turned it over four times against him — and crashed the boards at the perfect time. That was enough. The Finals are great because they shape how we remember the greatest players, but the championship round is as much about fringe guys like Dellavedova. You think the city of Cleveland loved J.R. Smith after the Hawks series? Dellavedova might get elected governor of Ohio if the Cavs win a title.

For now, we got a second straight game that delivered as well as any in recent Finals memory, and this was the game winner:

Lil b is terrible 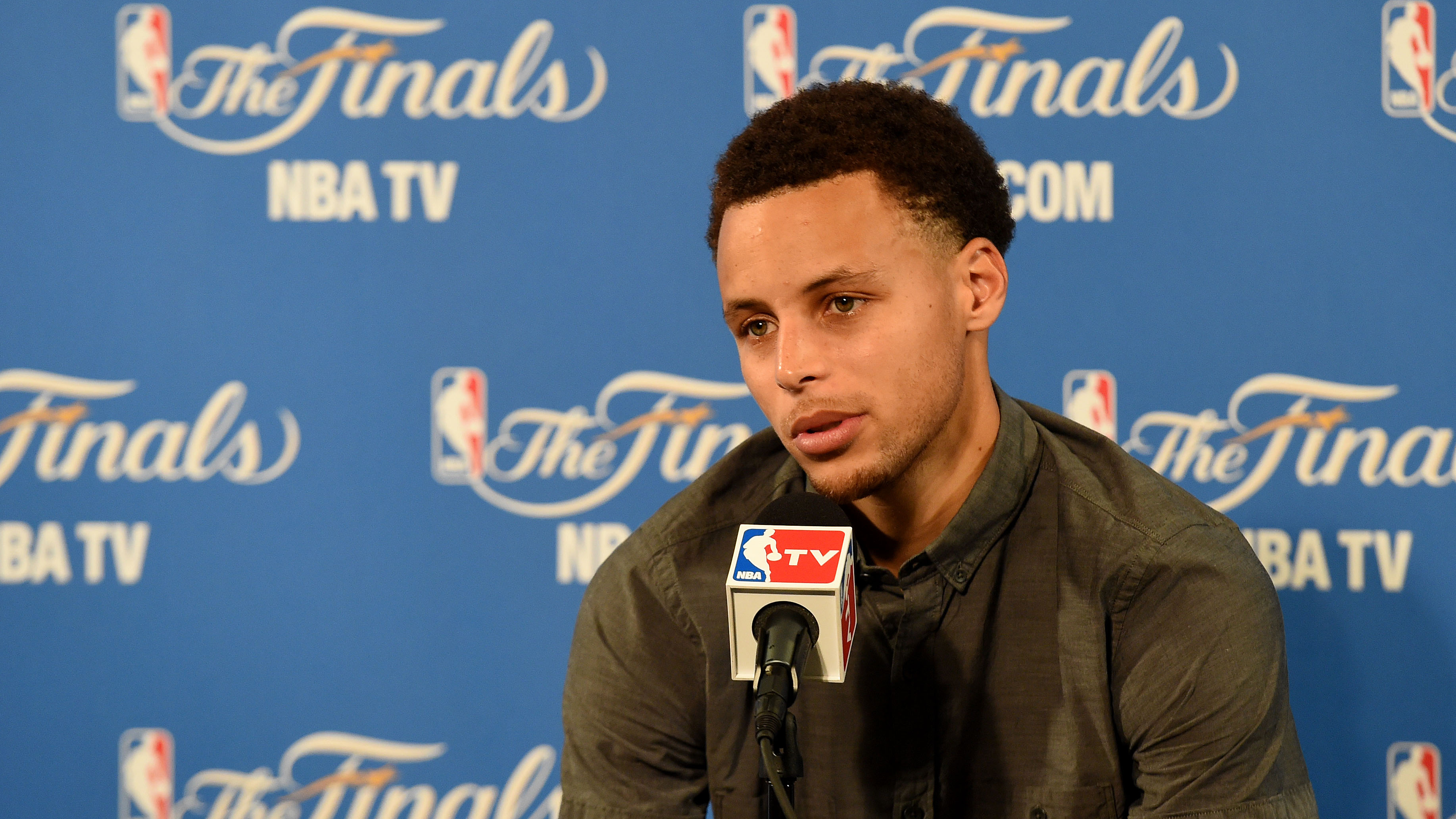 … But it wasn’t something that Stephen Curry could’ve explained up on the postgame podium much better than any of us watching at home, the bizarre phenomenon of the greatest shooter in basketball history missing shot after shot after shot.

Outside of an elimination game, it’s hard to conceive of a worse time for Curry to turn in the worst shooting performance of his NBA career. That’s not hyperbole. Curry shot 21.7 percent from the field on 23 attempts last night. His previous career low in a regular-season or playoff game with at least 20 attempts was 23.8 percent — and that happened in 2010. Trying to imagine a Curry meltdown worse than last night is about as impossible as what happened … last night.

And yet the Warriors lost by only two in a game that was maybe the perfect melding of grind-it-out retro basketball and the space age (the Warriors and Cavs combined for 62 3-point attempts). Both Kerr and Curry stepped up on the podium without much worry on their faces. They played a near-flawless defensive game and had several questionable calls go in their favor against LeBron James. Fourteen of the Cavaliers’ 20 first-quarter points came from inside the paint; they scored a total of 12 points in the paint in the remaining 41 minutes. The Warriors going small made it hard for the Cavs to insert Timofey Mozgov, who had an incredible first half, into the game with any regularity in the second half. Draymond Green and Andre Iguodala forced the worst possible 39-16-11 triple-double out of LeBron. Everything went according to plan for the Warriors, except for the most reliable contributor on the team.

“I knew as soon as they left my hand that they were off,” Curry said after the game. He said it matter-of-factly, so he wouldn’t make it seem like too much of an excuse. But he did acknowledge it. He is, like most great shooters, a machine with a sense of touch. He just couldn’t locate the soul in the machinery last night.

How to Almost Save a Life

Shea Serrano: It was so close to happening.

Let’s be clear: LeBron charging the rim is as terrifying a thing as there is. That’s what it is. The list of human men LeBron James has decimated with his bald bull charge is long and bloody. RIP, Damon Jones and Jason Terry, especially.

And there it was, there he was, game on the line, tearing a hole in the universe and also in Andre Igoudala — bless his fearless heart — freight-training his way to the basket with his Cavs down one with 24 seconds left in overtime. James had gotten Iggy turned and had his shoulder past him. All that was left was for the family of the deceased to choose a nice headstone. LeBron gathered himself, lifted off, was at the goal, ready to be the hero, ready to add another name to his kills list. And that’s when it happened.

Draymond Green, his heart the size of a Ford F-250 diesel engine, materialized from the ether and met him at the rim.

The Cavs still won. LeBron ultimately prevailed. But for that moment, he didn’t, and it seemed like they wouldn’t.

Draymond was almost a hero. Almost.