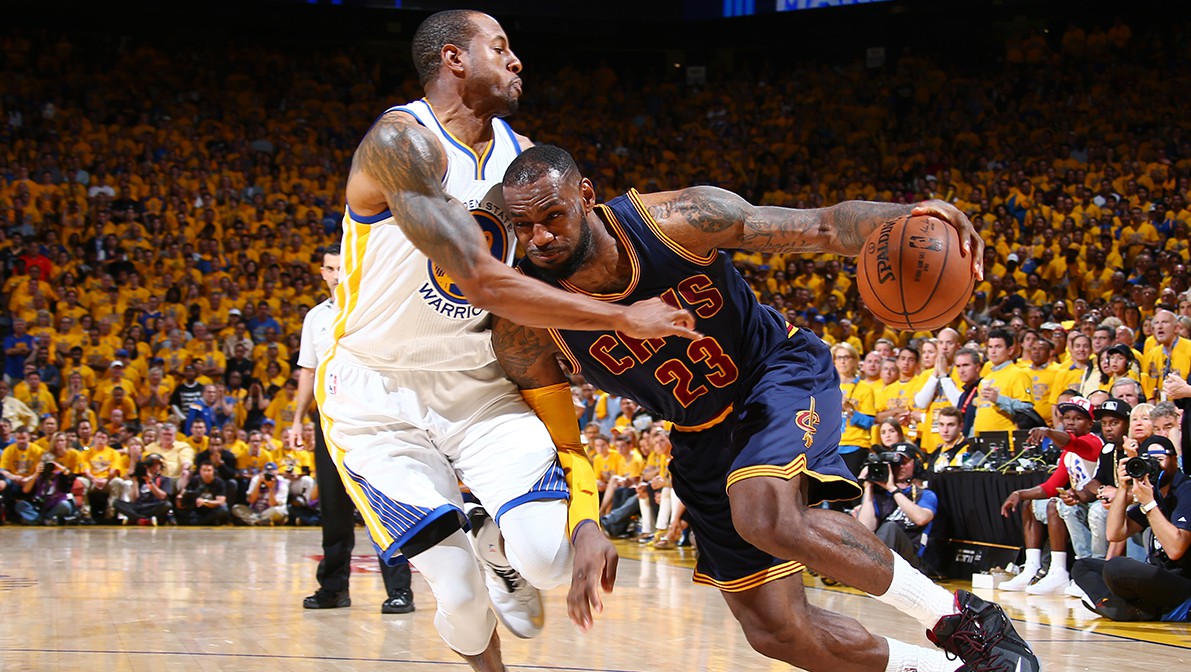 I don’t know how to process what just happened, and I sure as hell don’t have time to process it before my 4 a.m. wake-up call for a flight to Cleveland. So let’s just start here: That was the craziest damned game I’ve ever seen in person.

When Marreese Speights missed an uncontested dunk to end the third quarter — chortle at Speights, but Andre Iguodala should have just taken it to the rack himself — Game 2 of these wackadoo Finals ceased to be a basketball game. The fourth quarter and overtime were like the last 17 minutes of 2001: A Space Odyssey. All of us at Oracle Arena were just rocketing through the space-time continuum, howling noise buffeting us from every direction, as random images flashed across the sky.

I’m pretty sure all of the following happened:

This game was madness.

“It was miserable to watch,” David Lee told me afterward. “I really thought we were gonna win when we sent it to overtime. It was just a crazy game. Both teams won the game about five times.”

You could agonize over two-dozen little plays that were an inch away from turning out differently and convince yourself any one of them might have turned the game. But that’s a futile exercise, and it might end with you entering an asylum. No one play happens in a vacuum. Plays at the end of a game matter a little more than others, simply because there are fewer chances left, but every tiny thing that came earlier influences the texture of that endgame sequence — every call, every noncall, every deflection, every Iguodala steal-and-dunk undone by a fluttery dribble that drips over the sideline. Random stuff happens, or doesn’t happen, and if the basketball odds divvy up the spoils into something like a 50-50 split over 48 minutes, you get a crazy finish between two teams playing at the same level.

The micro picture can confuse you. The macro picture is this: The Cavs have found a formula that seems to bother Golden State in its slowdown simplicity. They pound the ball to LeBron, kill the clock, work the offensive boards, and smother the Warriors’ league-best offense on the other end.

They’re hounding Curry as soon as he crosses half court, and then again on the pick-and-roll, with two defenders stringing him out toward the sideline. They’ve forced the ball from his hands and turned Green into a playmaker — a task at which he mostly failed in Game 2, when he flung lob passes to the sky.

The Cavs defense wasn’t perfect, especially when Curry dragged Mozgov into the pick-and-roll or jetted around two screens staggered just a few feet apart, but this is the correct way to defend Golden State — the method Houston should have used. Take the ball from Curry and make the other guys kill you.

As I wrote after Game 1, the Warriors have faced that defense before, and they have built counters for it — including those flying Green pin-downs for Thompson that worked again last night. Green needs to make more functional plays on those 4-on-3s when Curry entrusts the offense to him, and, holy heck, would just one pick-and-pop 3 be a welcome sight for the Dubs. But when Curry passes the ball, the Warriors offense can turn aimless against a dialed-in defense. Green or Andrew Bogut holds it at the elbow, everyone runs around and screens for each other, and if none of those screens work, no one really gets open. I wrote after Game 1 that I almost wanted Curry to be more selfish — to split those pick-and-roll traps, keep his dribble alive, probe the defense more, force a big man to switch onto him. I still feel that way, especially after watching Curry split a Tristan Thompson trap on his way to the uncontested layup that tied the game with seven seconds left in regulation.

Having one player over-dribble runs counter to Golden State’s ideology, but all of that scurrying around picks away from the ball led nowhere. Dellavedova was masterful tracking Curry. When Smith suffered blips of inattention chasing after Klay Thompson, another Cavalier was primed to help. LeBron snuffed Thompson at the rim after Thompson had back-cut Smith along the baseline. And with about 6:45 to go in regulation, Tristan Thompson saw Smith trailing badly and leaped around a pick to contest a Klay Thompson triple.

Mozgov weirdly vanished in the fourth quarter, almost certainly because David Blatt feared how Mozgov would hold up against Golden State’s super-small lineup with Green at center, but he was brilliant in the first half. He sliced through the crevices that opened when the Warriors overloaded on LeBron’s post-ups, and he finished tricky shots with a soft touch.

He was Bogut’s equal, and perhaps his superior, protecting the basket, and he proved in the second quarter he could hang in against that super-small Warriors group. Blatt wisely had Mozgov guard Iguodala, the weakest Warrior in those lineups — only Mozgov didn’t really guard Iguodala at all. He planted himself near the paint, ready to pounce upon any rim attack. It was not so different from how Steve Kerr had Bogut “guard” Tony Allen in Game 4 of the conference semifinals against Memphis, and it worked.

LeBron might control the offense in Cleveland, but Blatt, Tyronn Lue, and the rest of his staff deserve huge credit for crafting pinpoint defensive game plans for both the Hawks and Warriors.

The Cavs offense is a mess, but they are somehow squeezing out just enough points to give themselves a chance. They kept the Warriors off-balance by adding some variety to the LeBron Isolation Attack. They ran many more pick-and-rolls than they had in Game 1, and while those plays didn’t always produce great shots, they forced the Warriors to work a bit defensively — to remain on high alert. LeBron directed a nice spread pick-and-roll attack with Mozgov during a small-ball stint in the second quarter, dishing to James Jones for a 3, and then Mozgov for a lob dunk attempt.

Jones was plus-22 in less than 23 minutes, and Cleveland took only 13 shots directly out of isolations after jacking 23 such shots in Game 1, per Synergy Sports.

James was relentless putting Curry in the pick-and-roll down the stretch, and though Golden State grew more comfortable defending that play, it still opened tiny cracks for Dellavedova rolling floaters, Shumpert 3s, and LeBron drives. That is the paradox of LeBron: He went 0-for-7 after that killer 3, but the Cavaliers couldn’t generate a single shot without his creative skills.

After the game, Green bristled at the notion that Golden State needs to make adjustments on defense, and he’s right. Cleveland just doesn’t have enough to score efficiently against the Warriors. They might hit one random game of lights-out shooting, but it’s mostly going to be a slog. The Cavs don’t have a lot of tools left on offense, but they have to use all of them.

Golden State is still the big favorite here, but we need to stand up and take notice of what Cleveland is doing with this MASH unit. On to Game 3.