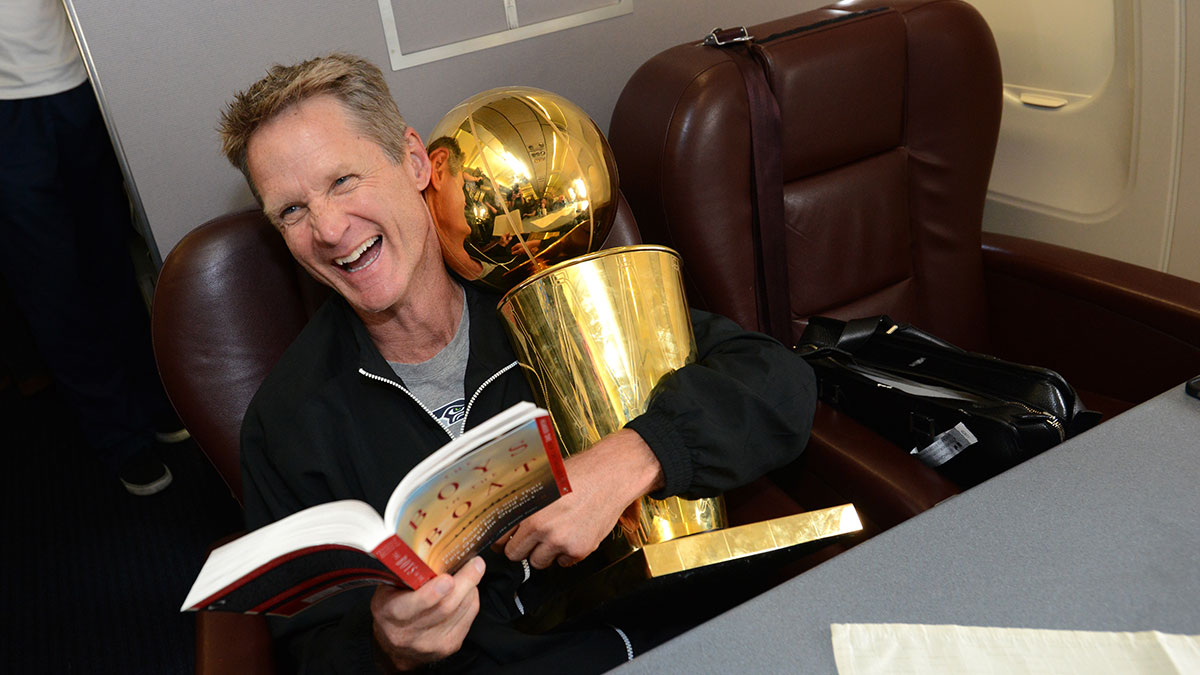 Zach Lowe talks to Steve Kerr about the elation that comes from winning, guarding LeBron, offseason plans, and more.

Below is an edited excerpt from the interview.

What was the craziest thing that happened at the after-party at Morton’s Steakhouse — of all places — in Cleveland, Ohio? I don’t know if you leave the craziness to the players? Like Draymond standing up on a table and the coaches are all in their separate corner? I don’t know if you sing karaoke. I don’t know if you took a drink out of a giant, 5-foot-tall champagne bottle. What are you doing during this party?

Well, it started pretty late, because the game was at nine o’clock Eastern. By the time we got back to the hotel and to Morton’s, it was two o’clock in the morning probably. So, it was just a great atmosphere. The families were all there, all the players and coaches, obviously, and we were there until probably five in the morning. And I would say that the highlight was [when] we went out on the sidewalk — maybe at six o’clock in the morning — and had a victory cigar. Steph and Draymond and a couple of the coaches, a few friends — we were all out there watching the sun come up and smoking a cigar. So, pretty good moment.

I tried not to, but it’s hard not to because, having been through it as a player five times, that’s the moment. When the buzzer sounds, after two months of stress and grinding through the playoffs, that moment when it finally ends is just exhilarating. So you don’t want to let yourself think about it, but that’s the moment. I didn’t really plan anything. I knew I didn’t want to go absolutely crazy and make a fool of myself. You’re also well aware that the other team is bitterly disappointed, and we wanted to make sure we paid our respects to Cleveland before we celebrated. It was a great moment, but we tried to handle it the best we could and then get to the locker room and go crazy. And that’s what we did.

You don’t get a lot of time after you win the championship to be together with just your team. I mean, you’ve got media obligations across the board. Did you get a chance — and I’m not watching this on TV, I’m there running around — to address the team? Or did someone else address the team? What was said when you did have that 10 minutes or whatever it was when it was just you guys and the champagne?

No, there was no addressing of the team. It was just bedlam in there. Because of the celebration onstage and the presentation of the awards and everything, by the time we all walked into the locker room, the champagne had been uncorked — and, trust me, the players were tired of my speeches anyway. They didn’t want to hear anything from me.

Did you say anything? Did anyone get up and speak at the party afterwards, or was there just not time or space for that?

No one, it was just celebration?

It was just pure celebration. As I said, lots of people there, lots of family members and friends, and the energy, as you might expect, was just incredible. But just a combination of joy and relief and happiness, and it was just a chance to be together one last time and soak it all in.