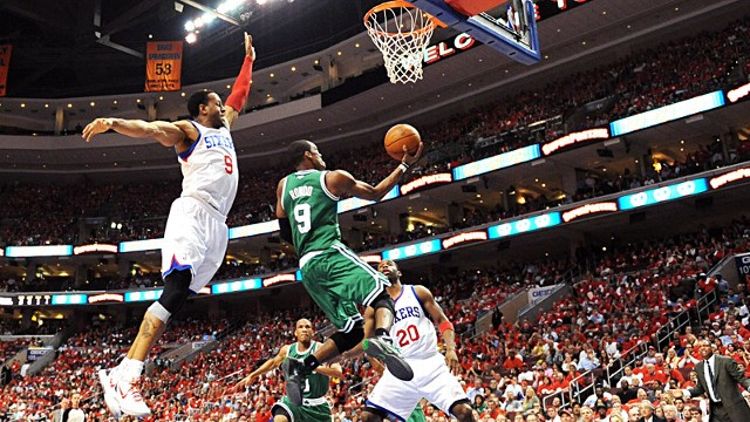 That was Doc Rivers’s assessment of his point guard’s demeanor going into Game 3 in Philadelphia. It ended with Rajon Rondo scoring 23 points (13 in the first quarter), doling out 14 assists, and losing just one turnover. So, yeah, you could say Rondo was serious. After Game 1 — in which he messed around and got a triple-double — the Celtics point guard complained of not getting his nap before the game and how it negatively affected his performance. Rondo looked … well-rested Wednesday night.

Despite a turn-back-the-clock game from Kevin Garnett and a defiant 24 points from Paul Pierce, it was Rondo who drew the most attention from the crowd and the bowled-over Sixers on Wednesday. Not that he was paying it any mind. That’s the thing about seeing Rondo run a game — you can never tell where his focus is, precisely because it seems to be on everything around him.

Rondo didn’t just complete a few no-look passes Wednesday; he no-look called out the Sixers’ offensive play, no-look positioned Avery Bradley exactly where he wanted him before the Celtics even got into their sets, and no-look commanded his teammates to gather around him during breaks in play. And they did. They came to him like a life raft: Garnett, Pierce, Bass, and Bradley, huddled around him as he barked out cheats on plays Doug Collins hadn’t even thought about yet.

His magic even won over the Sixers crowd, or at least the survivors who stuck around through the fourth quarter. With 8:49 remaining, Rondo received a pass in the paint. He was wide open, about six feet from the rim, the Sixers defense practically begging to be sent out on ice floes. Instead of taking the open shot, Rondo reversed the ball — one-handed, one touch — to a wide-open Mickael Pietrus, standing in the corner for another dagger. This caused one of the Wells Fargo Center security guards to exclaim, “God damn it, Rondo!” — followed by some amazed laughter. Rondo, naturally, did not break a smile.

It’s funny how an inch to the right or left can make all the difference. The Lakers are praised as the gritty old-timers who answer the bell when they need to. The conversations in Oklahoma City persist about who should control the ball in the games that matter most.

Through three quarters Wednesday night, Kevin Durant, the best scorer on this (and I can only assume any other) planet, had taken eight shots. In a third quarter where his team scored 12 points and had fallen behind by three, he shot just four times. In the past, Russell Westbrook has taken the brunt of the criticism for Durant’s lack of chances, and in many of those situations, it’s been fair. Far too often the Thunder offense devolves into Westbrook pounding the ball near the top of the key and settling for jump shots while one of the league’s most efficient scorers stands idle on the wing. It might be time to consider how much Durant’s idling plays into the equation.

Durant’s name is rightfully mentioned with LeBron James’s in the conversation for Earth’s Best Basketball Player. But Wednesday night, if that Steve Blake jumper had fallen, that conversation might have tilted. It wouldn’t be Durant who got the heat for the Thunder’s crunch-time offense consisting of Serge Ibaka jumpers from the corner. Somehow, it would be Scott Brooks, or Westbrook, or someone else who tripped up OKC down the stretch. But it should have.

Metta World Peace is a tougher matchup for Durant than most and it showed during Wednesday night’s fourth quarter. These are the playoffs, though, and that’s just another excuse. Which is not to say Durant should be doing what Kobe did Wednesday night, or that the criticism of LeBron in late games is always justified. It’s to say that Durant is as big a star as both and in games like last night’s he should demand that the ball be in his hands as much as we do.

When Doug Collins walked into the postgame press conference Wednesday, after his team had been baptized by the Celtics, he made a beeline for his three grandchildren, kissing each before he took the podium. Before the game, Collins joked that years before, as an analyst, he used to coach both teams during games and, “I was undefeated, baby.” After the game, he still had an analyst’s mind, easily digesting and presenting a variety of statistics that showed why the Sixers got punked out in their first home game of the series. But the major hallmark of Collins the coach was on display, too.

Collins, with that beatific look in his eye that he gets when talking about this Sixers team, spoke about his squad being “seduced,” he talked about the “ebb and flow of emotion” that dominates a game. He speculated that the Celtics were “looking at that other series a little bit,” knowing Chris Bosh is out and Miami could be a vulnerable Eastern Conference finals opponent. And, of course, it wouldn’t be Doug Collins if he didn’t talk about family: “Thad [Young] is like a son to me.” They may have gotten blown out of their own building, but for as long as the Sixers have Collins in command, they will have love, even in a hopeless place.

One of the first things you really learn as a basketball player that does things like “dribble” and “pass” is to not telegraph your passes. When I saw Kobe’s attempted pass into the high post to Pau Gasol that was intercepted by Kevin Durant, I convinced myself that Durant must have made some crazy athletic play and gone full-Dhalsim to cut off the pass. After 10 more viewings, though (one for clarification, nine for giggles), it became clear that all Durant had to do was leap four inches off the ground, since Mr. Mamba lofted a pass that Earl Boykins could have gotten his fingertips on. Just horrible, Kobe Bean.

I know I wouldn’t be making such a big deal out of this had Mike Brown drawn up a better play at the end of the game instead of that “flare” that never gave you a chance to get the ball from Metta, but he didn’t. And Metta passed it to Steve Blake. And Steve Blake missed. And you lost. While the last play is the lasting memory, the Lakers are never in that position if you don’t make that second-string JV point guard pass. You’re better than that. Thirty-five more performances like that and you’re asking for a late-game LeBron comparison. Just know that.

In a bunker deep in the Celtics practice facility in Waltham, Massachusetts, a trio of powerful figures comes together to discuss official “Flexing” policy …

Keyon Dooling: [Lowers glasses, pores over files.] OK, so community outreach for the official “Flexing” name has been a success. Good work, everyone. And ’Quis, you’re in touch with the patent-and-trademark people?

Marquis Daniels: Should have an answer by the end of the week. Fingers crossed!

Dooling: Excellent. Excellent. Let’s talk updated strategy. Now that “Flexing” has gone national, how/when/where should we be utilizing the Flex?

Ryan Hollins: Every time. All the time.

Daniels: I say go with the flow.

Hollins: Constantly. We should be constantly Flexing.

Daniels: Me, personally, I like to, kind of, fall asleep with my eyes open? Then wake up mid-Flex?

The Ballad of Mr. Tummyjiggles

Look, none of us was ready for this. We were a bunch of kids back then. There we were, watching TV, watching the basketball, innocent as a Lavoy Allen 18-footer, when wham, there it was, no warning, just OH MY GOD THIS IS HAPPENING WHAT ARE YOU DOING MR. TUMMYJIGGLES WHY ARE YOU JIGGLING LIKE THAT THIS CAN’T BE REAL WHY ARE THE PEOPLE SPANKING YOU AND RUBBING YOU MR. TUMMYJIGGLES — and above it all, his totally unchanging tongue-out grin and those Bootsy Collins sunglasses spreading their wings like the tiniest condor in the universe. It was terrifying. It was mesmerizing. We were never the same after that day, because that was the day we learned what awesome looked like.

Dunk of the Night: Paul Pierce

A few plays before getting loose for this dunk/backboard-slap combo, Paul Pierce found himself trapped under the basket. He’d bulled his way down there on a slow drive down the middle, but hadn’t managed to convert the layup. And so he stationed himself in the paint, collecting his own rebound, going up once, twice. It wasn’t in the cards: a swarm of Sixers defenders denied him, the ball squirreled, sadly, away, and the offensive struggles for Pierce were perfectly encapsulated. Which is why, I’m pretty sure, he was so amped on that dunk that he made his voice heard and his palm felt: Before it, Paul had a pretty realistic concern that he, quite possibly, would never dunk again.

We Should Have Serge Ibaka Fight the Aliens in Battleship

Because he protects airspace better than anyone. (He did that seven times Wednesday night.)

Rondo, wearing the gray Members Only jacket, doing a terrible job of hiding his contempt for the postgame press conference process, notices, seated among the assembled writers, Brian Scalabrine, who is doing some media work for CSN New England. Rondo, actually perking up, “What’s up, Scaaaaaal. You got a question?”

Fantasy Fiesta: When Can We Trust the Numbers?