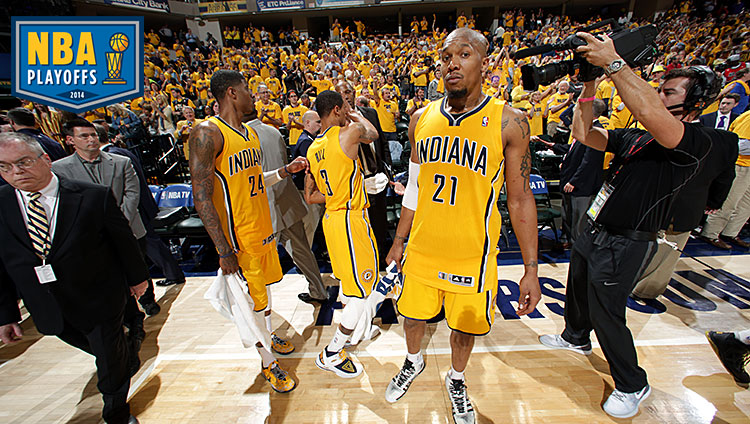 netw3rk: Ever since their stirring challenge to the eventual-champion Miami Heat fell short in Game 7 on the shores of South Beach last season, the Indiana Pacers have been focused — to the detriment of literally everything else — on the Heat and on not having to play a deciding game in Miami’s building when this spring rolled around.

Miami felt the chill of mortality ripple across its collective consciousness last May. Everyone knew it, and the Pacers were the ones who fanned that breeze. That series had come down to the slimmest of margins — individual plays executed under incredible pressure, defensive assignments missed by inches. In the deciding game, the Heat cranked up their ultra-aggressive — and physically demanding — swarm-and-recover defense to strangulation levels, and they prevailed. Take that immeasurably ethereal bit of energy generated by a home crowd and exchange it for all the tiny indignities and discomforts of sleeping in a hotel room in enemy territory and …

Everything the Pacers have done since that series — every roster tweak, their philosophically Hibbert-centric playing style, comments made by their players — has pointed to the team’s obsession with having home-court advantage against the Heat. So, maybe it’s not a surprise at all that the Pacers hit Game 1 like John Rambo escaping the police station and grimly taking to the woods with his knife clenched in his teeth. They unleashed their best offensive game in several months, almost hitting their per-game average in made 3s in the first half.

One game does not make a series, of course. But I wouldn’t be surprised if the Pacers team whose epic swoon inspired who-hates-whom rumormongering, alleged off-court shenanigans, and Andrew Bynum/Evan Turner locker-room cancer theories is a thing of the — admittedly, very recent — past. After all, this right here is what they were built for.

Chris Ryan: According to Basketball-Reference.com, Indiana’s record against the Miami Heat while Evan Turner has strep throat is a resounding 1-0. Small-sample-size theater? MAYBE SO. I’m just saying, if I’m Frank Vogel, I’m treating Ev’s sore throat like he’s got that Gwyneth Paltrow Contagion condition. Here’s my prescription: Feed a cold, starve a fever, and never fuck with a winning streak.

Andrew Sharp: Lately it’s become popular to worship Russell Westbrook and all the chaos that comes with him. And Russ is great. But look, if it’s thrills you seek, there’s a whole other level out there. That level is Lance Stephenson.

My faith had waned these past few months, I won’t lie. But this past Saturday, it all came rushing back. That’s when Lance started talking about Dwyane Wade. “His knee is kind of messed up,” Stephenson told reporters before Game 1. “So I have to be extra aggressive and make him run. Tell coach to run ‘Floppy’ and run him around and make his knee flare up or something. Do anything possible so the games will come easier for us.

“It’s just basketball,” he added. “If I see D. Wade walking down the street, I’m not going to try to get him.”

That’s when I knew we were getting a great Lance series. Because it’s always fun when a player has to clarify he won’t actually attack someone on the street.

After that, it wasn’t even surprising to see Stephenson go out there and anchor the second unit without Evan Turner — something he did the whole first half of the season, when the Pacers were good. He kept it going all day. Scoring, harassing Wade, and making plays all over the court. Like this pass:

The Pacers have been miserable to watch lately, and maybe they still are. But not Lance. Now that my Wizards are out, I’m back in. It’s too much fun watching him make all this up on the fly, going 110 mph at LeBron and Wade on both ends. He’s arguably the key to this series, which is terrifying for Pacers fans but exhilarating for the rest of us.

He had 17 points and eight assists in Game 1. Toward the end, I yelled to my roommate in the kitchen, “THE LANCE REDEMPTION IS REAL!” A second later, he bricked a 26-foot pull-up 3.

It’s gonna be a fun series.

How to Disappear Completely 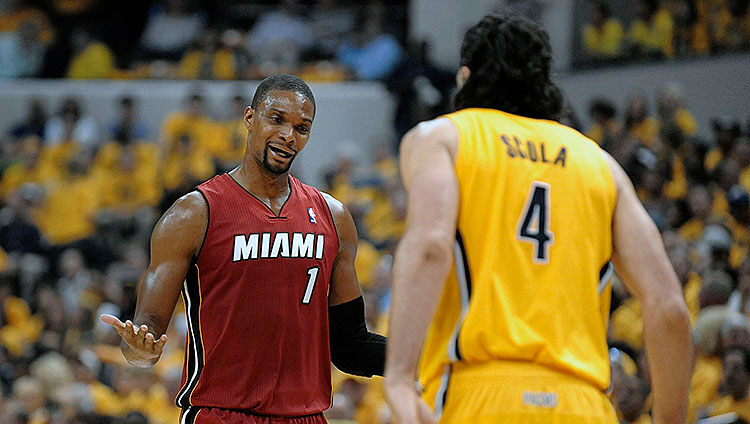 Danny Chau: With 2:50 remaining in the fourth quarter, you could see the exact moment Chris Bosh fully succumbed to the monumental failure that was his Game 1 outing. With the Pacers up 14, David West slipped a screen set for Lance Stephenson near the sideline that completely displaced LeBron James. Stephenson read the motion and made the pass to West immediately. To Bosh’s credit, he saw the play unfolding and was quick to react … but he was too quick to react.

West caught it on a mini hop and showed the ball as he landed on his feet. That was enough for Bosh, who was starved for some kind of positive to take away from the afternoon. West had made a fool of him too many times. He lunged hard at West, losing sight of the fact that West has always played the game with a monk’s patience. West waited as Bosh zoomed past him, then went in for the dunk. Nail in the coffin.

Bosh finished with a game-low plus/minus of minus-16. He missed all five of his 3-pointers, and of his 12 shot attempts, only two came from within the restricted area. Roy Hibbert and West handled him in their one-on-one matchups in the post, and whatever virus Bosh acquired down in the paint spread to his pick-and-roll efforts.

The Pacers played gorgeous basketball, scoring more points in Game 1 than they have in any game since mid-March. They made the game look easy, though the Heat deserve some credit here, too. Maybe SportVU can log some hockey assists in their name. It wasn’t just that the Heat were allowing these unmissable opportunities — they were also some of the chief creators.

Ryan: I’m sure C.J. Watson, like most of us, would love to learn another language. I just think there are less immersive ways of doing so than being thrown headfirst into the Spanish-language announcers’ table by Mario Chalmers.

Kirk Goldsberry: If the Heat don’t fix their defense very soon, their title run will end this round. Miami’s defense was so flat in Game 1, they made the Pacers look like the Spurs. The Pacers spent most of the first quarter raining down open 3s and banging their way to easy looks at the basket. Every possession seemed to end with a shot they wanted, while the Heat looked totally unable to stop it. After the game, Erik Spoelstra seemed shocked his defense had even the potential to play so poorly: “If you would have told me before the game we’d have 95 points, I would’ve said that would put us in a good position to win the game.”

But they lost, and as LeBron James said afterward: “Our pick-and-roll coverage had a lot of breakdowns, including myself … And we allowed them to get into the paint. They shot 37 free throws to our 15, which is definitely something we can’t duplicate going into Game 2.” Listen to the man.

Arsenal Win the FA Cup in the Most Arsenal Way Possible