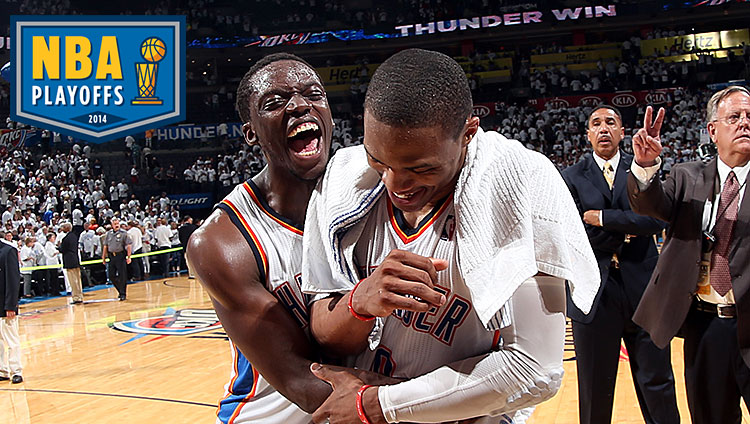 May 14, 2014
by Chris Ryan, Andrew Sharp and Jason Concepcion

netw3rk: In a season where the lizard-scaled antebellum worldview of Clippers owner Donald Sterling finally crawled into the daylight of the world’s attention, it’s quite comforting to be back on the well-trod ground of questionable clutch-time calls that maybe, just maybe, swing playoff games.

I don’t know about you, but I much prefer slow-motion replays of bang-bang on-court incidents, tuck-rule parsing of NBA regulations, and plain old castigation of referees for being obstacles to our enjoyment to the ramblings of out-of-touch octogenarian racist billionaires. Every sporting generation needs an inconsistently refereed, closely contested playoff game to rally around, and this one is ours.

With 11.3 seconds left, Matt Barnes stripped a driving Reggie Jackson with a not-insignificant amount of hand-on-hand contact, causing the ball to go out of bounds. Replays showed that the ball appeared to be off Jackson. Referees went to the magic woobie blanket of instant replay and awarded the ball to OKC.

That one play was not specifically why the Clippers lost. Jamal Crawford had a few remorseless and ill-advised clutch-time heat checks that came up short. DeAndre Jordan fouled out. Durant went Reaper. Cliff Paul played out the last 40 or so seconds of the game.

But citing the multiple other factors that contributed to the Clips losing this game as a way of diminishing the out-of-bounds call — that would kind of misrepresent the way we process, you know, time itself. Sure, any number of calls and non-calls could’ve been made at any point in the game. But that ignores the kinda key detail that time is linear, and that calls that happen later will, of course, count more in our memories and in fact than those that came before. Every team gets away with stuff; the stuff that happens later, in close games, just looms larger.

The Church of Russell Westbrook

Chris Ryan: Hello. Welcome. Pull up a pew. Tie a bandanna around your head. Inject this drug that has no name, harvested from a secret tree in the Amazon, right into your jugular. Watch the six-minute, one-take stash-house heist from True Detective 15 times in a row. Read Fear and Loathing in Las Vegas backwards. Put on some Bad Brains. You feel that? 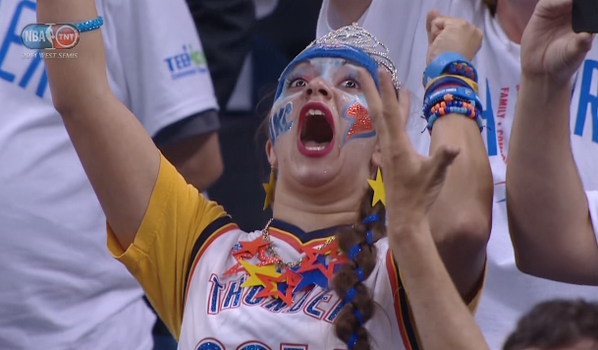 Do you know what that is? That’s freedom. Welcome to the Church of Russell Westbrook.

I am the high priest of this church. Or maybe I am the chief apologist. Nah, I can’t be an apologist; being in love means never having to say you’re sorry. Through Russell Westbrook regularly looking off the planet’s most lethal scoring threat, finger-gunning opposing benches despite being down double digits, doling out one-word interview answers, and wearing Delirious-era Eddie Murphy pregame outfits …

… I have stood by him. I don’t just forgive him his trespasses, I celebrate them. And last night, I and everyone else in my congregation were rewarded.

In Game 5, Russell Westbrook scored 38 points. It was his fourth 30-point game of the postseason. While Kevin Durant spent most of the game trying to escape the cuffs Matt Barnes put him in, Westbrook kept his team afloat.

According to ESPN Stats & Info, up until the final few minutes, Russ scored 18 of the Thunder’s 36 second-half points. But even in the last few minutes, when Kevin Durant emerged from his shooting funk to become the once and future king, Westbrook still impacted the game in the most Westbrookian way possible:

• With 1:07 left, Blake Griffin missed a free throw, only for Big Baby to outmuscle Serge Ibaka for the offensive rebound. Westbrook scampered out to the perimeter to pick up Matt Barnes, but he still found time to shoot Ibaka a look that roughly translated to “You better go into witness protection.” This is Russell in a nutshell: Everything is about him, and most things piss him off, and I would say 75 percent of what he does is an act of vengeance against what pisses him off. I never said it was a forgiving church.

• He then proceeded to assist on Durant’s 3 to bring the lead to four, grabbed the rebound off of Jamal Crawford’s miss and threw the outlet pass to KD to cut it two, and stole the ball from Chris Paul in the Thunder half, with 13 seconds left to create the Reggie Jackson out-of-bounds call heard round the world. Steve Kerr commented, “All hell breaks loose.” Little did he know, hell was around the corner.

• Westbrook’s grand finale saw him take a 3, with seven seconds left, while guarded by Chris Paul, while Kevin Durant was on the floor, with the Thunder’s season hanging by a piece of dental floss. Somewhere, in the middle of the night, Marcin Gortat put 300 on. Hero shit was happening. He was fouled by Chris Paul. Maybe you don’t think so. Congratulations on your unique perspective. The Spurs are on tonight.

Russell Westbrook buried all three free throws. Kevin Durant didn’t even watch. Maybe he was scared. Or maybe he’s like me. 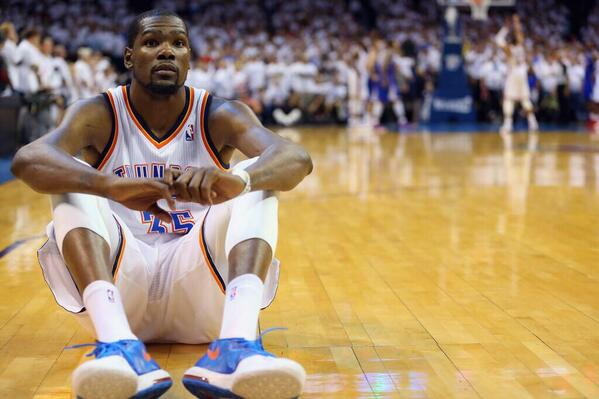 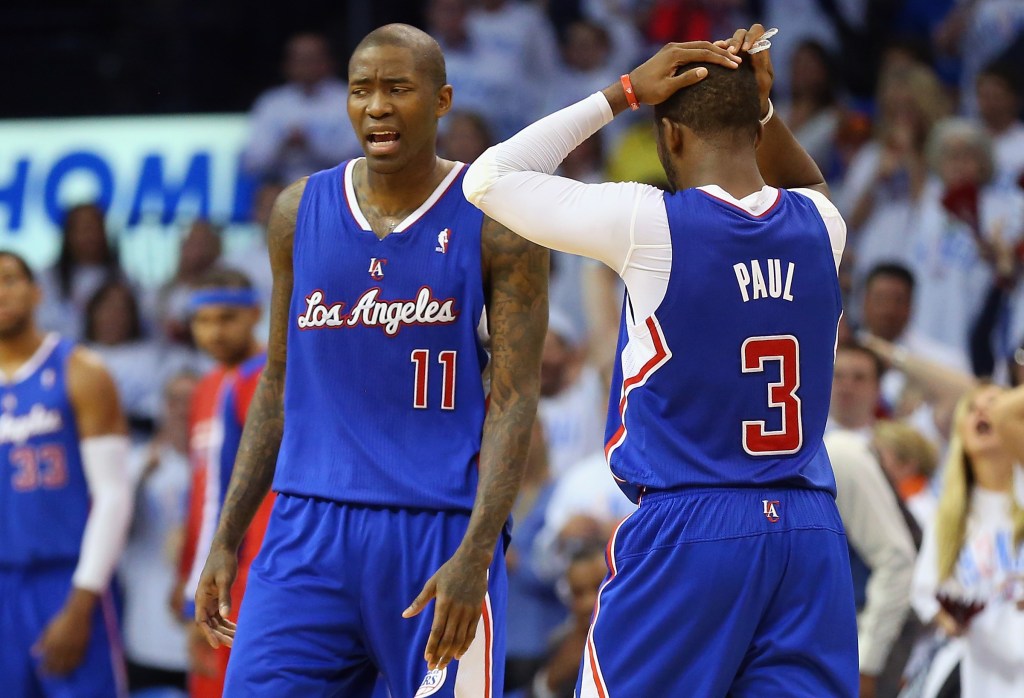 Andrew Sharp: Well, watching Chris Paul was a hell of a ride … as long as you’re OK with a fiery crash at the end. OKC came out flat last night, Blake and the Clippers’ shooters both showed up to take the pressure off Paul, and they had the game won when Paul hit a dagger jumper to put them up seven with 49 seconds left. Then:

You couldn’t have imagined a worse ending for any player. Everything that makes Paul’s pissed-off game kinda obnoxious — the flopping, getting away with calls, over-dribbling — suddenly started working against him.

When he flopped into Russell Westbrook for the intentional foul, there was no call and he lost the ball. Then came the Reggie Jackson controversy that gave OKC a shot to lead or tie, and CP3’s trademark sneaky hit on the elbow gave Russ three free throws to take the lead. It was the exact same move that didn’t get called in Golden State. Then at the end, with one last chance, Paul dribbled into the lane, got hit on the wrist by Reggie Jackson, and the ball bobbled out of bounds without his ever getting a shot off.

It was like karma finally caught up with him all at once.

CP: "Everything that happened at the end is on me… Assuming they were going to foul is probably the dumbest play I've ever made. BK…

If you’ve spent the last few years hating Chris Paul, it was glorious. I’m sure it was excruciating for Clippers fans. For everyone else, this was just incredible. Forget the refs for a second — we just watched one of the best point guards of all time give away a playoff game almost by himself.

Everything he’d done before only makes it crazier. We got 61 assists and nine turnovers in the first five games, 23 points a game on 54 percent shooting … and then those final 13 seconds.

That’s when I remembered that, as much as I love watching pissed-off Chris Paul go crazy and take over games, the flip side is that sometimes he tries to do too much, he tries to be too smart, and it all gets counterproductive. That’s always been true with CP3, I know. But man. We’ve never seen it get counterproductive like THAT.