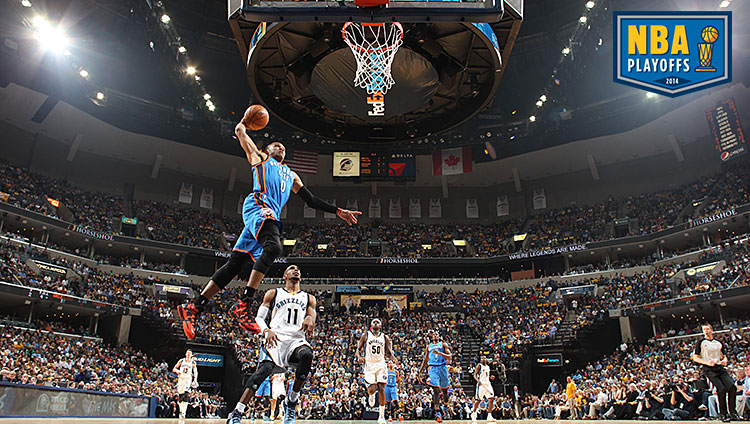 May 2, 2014
by Chris Ryan, Brian Phillips and Jason Concepcion

Brian Phillips: Steven Adams is 7-feet tall and from New Zealand, which technically makes him an ent. You need these guys in the playoffs, big, loping tree-warriors with clubs for limbs and a moral code that isn’t quite human. At a moment last night when it looked like James Johnson might single-handedly wrench the Grizzlies back into what had been a ragged blowout — already a phenomenally strange moment in this phenomenally strange series — Adams slowly and calmly went to work razing battlements: five blocks in 20 minutes, along with three rebounds, four fouls, a cathedral bell ringing inside Marc Gasol’s cranium, and at least one stretch when he seemed to have driven Zach Randolph toward a temporary-insanity plea. Well, James Johnson is probably the NBA player most likely to be a secret uruk-hai. So it kind of makes sense.

Obviously the 200-point Oklahoman headline from that game was that Kevin Durant is not actually Mr. Unreliable, gasp, cue fainting in the bleachers. And the subhed is that Russell Westbrook somehow discovered that (a) he’s a point guard, not Wolverine, and (b) the NBA shot clock lasts 24 entire seconds, all in one game. (Although that gloriously goofy 25-foot banked 3-pointer he hit was so Russ Being Russ that I wanted confetti to fall from the ceiling after it rattled in.) But this was a tremendous, identity-saving win for the Thunder, and it had more facets than just Kevin Durant and Westbrook. Dudes like Adams lumbering up to the moment, heroically annoying the last dregs of morale out of the enemy, is what OKC needed as much as anything. As a Thunder fan, I couldn’t be happier. Call him Mr. Unjustifiable — put it in tiny type in the corner of the third sports page, but do it.

Chris Ryan: When the Warriors showed Jarrett Jack on the video screen last Thursday, the Oracle crowd cheered. Jack was in attendance for Game 3, and it was easy to think the Warriors fans were wishing they could have him back for this never-ending series against the Clippers. Andre Iguodala was supposed to bring all the veteran leadership that Jack did, and add some great defense and exclamatory finishing in transition. Instead he spent a lot of the season nursing injuries and put up his fewest points per game since his rookie season.

Turns out the Warriors missed Jack’s forays into heat check territory; they needed someone to act as an offensive stopgap on nights when Steph Curry and/or Klay Thompson weren’t feeling it. The Swiss Army knife utility of Iguodala was great, just as long as that knife had a Jarret Jack blade.

Well, Iggy found his Jarrett Jack blade this series; it was the kind Iguodala was born for. Doc Rivers called last night’s clash “one of those hustle games.” Iggy lives on that line between hustle and glamour. He has come alive in this series, scoring 22, 18, and 15 in the last three games, and working with Draymond Green to create a two-headed matchup monster on both ends of the floor. Whatever happens Saturday night in Staples, they’ll be showing his four-point play from Game 6 on the video screen at the Oracle for a long time to come.

Ryan: Go ahead and tell him you think that’s corny.

I Become Small and Go

netw3rk: The evolution of the Indiana Pacers’ collective identity as a defensive, smashmouth basketball team was a natural outgrowth of Frank Vogel’s philosophies and the personnel at hand — most crucially Roy Hibbert. That defensive identity was built on Hibbert’s all-eclipsing size and ability to deny paint penetration without fouling. The Pacers had success playing that way. A seventh game against the eventual champs last season; the league’s top defense and 56 wins this season.

If there’s a weakness to Indiana’s style of play, though, it’s that it is inflexible. Which makes sense, when you think about the laser-tight focus a team needs to play with in order to maintain that style over the course of a season. For it to work, Vogel had to convince his guys that there was no other way to play.

Which is why watching the Hawks’ small-ball attack shred the Pacers’ defense and turn Hibbert from a fearsome defender into an Olowokandi-esque stiff has to be painful for Vogel. He got his team to buy into a philosophy, only to have that philosophy wear increasingly thin over the last months of the season, until it finally, now, lays exposed.

Everyone, including Vogel’s own players, recognized it was time to change it up. The only question coming into Game 6 was would he do it?

Down 14-5 in the first quarter, Vogel finally gave in, pulling Hibbert after only six minutes and running out Chris Copeland. Without Hibbert, the Pacers’ offense — normally an awkward riot of misunderstandings and dudes screaming for someone to set a screen or get the fuck out of the way — had some spacing (even if it still lacked flow). Suddenly Paul George could get into the lane, David West could set up in his sweet spots, and Lance Stephenson could do Lance things. Defensively, what the team gave up in rim protection, it gained in mobility.

You couldn’t say that Vogel truly went small, though. Ian Mahinmi, Vogel’s half-measure, played 23 minutes and got his soul vaporized by a Mike Scott emoji tomahawk. Vogel gave Hibbert a late nostalgia run just to see if he had magically gotten faster in the time since he was last in the game, I guess. He hadn’t, and was yanked for Copeland five minutes into the fourth with the Pacers down 74-73. Indiana went on to win 95-88.

We Went There: For Embattled Golden State, Everything Matters in Game 6