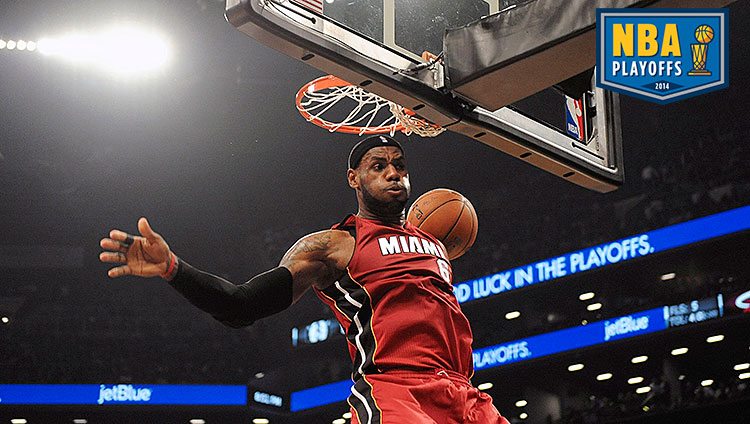 netw3rk: Game 4 was a callback to LeBron James in his pre-“Decision” days, his hometown Cavaliers days, his “name-dropped in Jay Z bars, dragging a subpar supporting cast across the finish line by the sheer force of his colossal talents” days. All the recent innovation seen in basketball over the last 10 years — the motion offenses, the embrace of the 3-pointer, several flavors of pick-and-roll defense, hybrid lineups, small ball, strongside overload defenses — all of that, in the end, can be trumped simply by having one of the best players who ever lived on your team.

Eternal ’Bron nemesis and elite old-man-game troll Paul Pierce — citing his years of up-close familiarity with LeBron — lobbied Coach Kidd for the James defensive assignment. He quickly picked up two personal fouls and a tech, and managed to hold LeBron to 25 in the first half.

The Heat would need every one of James’s 49 points. While LeBron was flashing back, Dwyane Wade was trying to reconcile what his body can do, here and now, with the muscle memories of his younger, healthier self. Wade was the next-highest Miami scorer, with 15, and while his shooting percentage looks OK in the cold computer-screen light, he was steps slow on both sides of the ball and committed a potentially devastating turnover with three minutes left in the game and the score tangled at 92.

A game like the one LeBron had creates a gravity field around the player. LeBron used that to create the space that led to the Bosh 3 that put Miami up for good.

About the only thing he didn’t do was find out what set off Solange.

Love in an Elevator 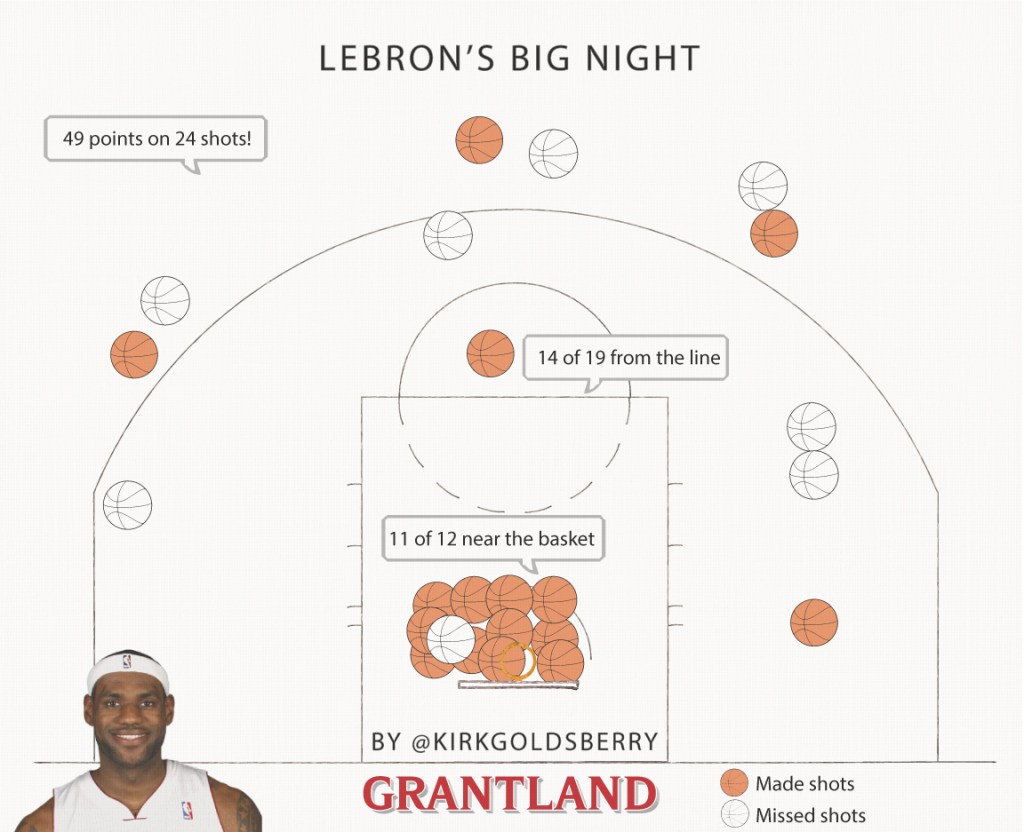 Kirk Goldsberry: LeBron James’s performance in Game 4 was representative of his scoring tendencies as a whole. Of his 49 points, 36 came either at the line or inside the restricted area. James remains the most dominant force in the league close to the basket, and he proved it by making 11 of 12 attempts there last night. As a jump-shooter, James was a mortal 5-of-12, but he did make 3 shots from beyond the arc.

Danny Chau: The morning after a demoralizing 24-point Game 1 loss to the Spurs, Portland cultural institution Voodoo Doughnut, true to its name, put out two doughnuts at the front of the store to be stabbed by incoming customers with pretzel pins. One was a chocolate-glazed square sporting the Spurs logo; the other, a Tim Duncan doughnut in the shape of an inflatable punching dummy. It was bad juju. The Blazers found a snake in their locker room hours before Game 2, and then lost by 17.

But Portlanders are a persistent bunch. Monday morning brought a new doughnut — a huge slab of fried dough covered in fondant with a crude illustration of a cowboy boot stepping in dog crap, which … I don’t think sent the message Voodoo Doughnut thought it sent. (Are the Blazers the dog crap? And what is dog crap but a minor inconvenience in the grand scheme of things?) It was silly. It was desperate. It was successful. It was the dough-racle that foresaw the miracle of Will Barton, the NBA player most likely to literally be made of a network of pins. His 17-point performance last night was a refreshing discovery. Who knew there was life beyond the Blazers’ core? For a night, Barton was the Gilbert Arenas to the Spurs’ Andray Blatche footwear.

Now the Blazers are a malodorous entity stuck to the bottom of the Spurs’ feet, which is somehow much better than the alternative. So let’s keep the ball rolling. I have a thought for Portland’s next ploy: If the city has any real malice in its heart, it should wage chemical warfare with the Spurs by shipping its entire stock of Rogue Brewery’s Voodoo Doughnut Bacon Maple Ale to San Antonio.

Chris Ryan: Tim Duncan should be designated a national monument, and I should not be allowed to slander him online or in the streets. But I couldn’t help but type “Tim Duncan dunked on” into Google after the above Dame Lillard poster was unfurled. In the words of Mirza Teletovic: Check his things on YouTube, man!

A video of the top 10 times Tim Duncan has been dunked on! What a world! I love the mixture of minimal vertical commitment and Louie C.K.–levels of self-disgust that runs through this montage. There’s some kind of cosmic trade-off happening here: Tim Duncan is one of the most decorated and refined players ever to step on the court. The price? Getting dunked on by Dwight Howard, Chris Wilcox, Andre Iguodala, and, of course …

LeBron James. 2006. Just to bring it all back home. What the hell. Let’s see these guys play in the Finals again.

The Grantland NFL Podcast: Michael Sam and the NFL Draft