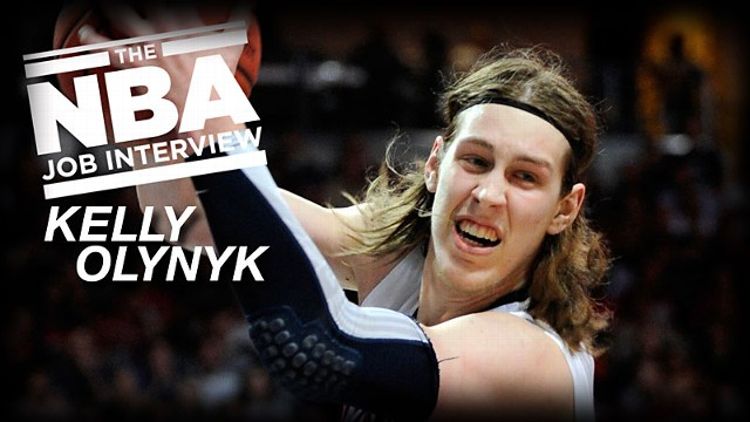 Jalen Rose and Bill Simmons talk to NBA draft prospect Kelly Olynyk about playing on the no. 1 team in the country, adjusting to the physicality of the NBA, and how Olynyk plans to “man up” when he plays against his childhood idol, Dirk Nowitzki. Check out a short clip below, followed by Brett Koremenos’s scouting report and the full-length video. Watch all the NBA Job Interviews here. And watch this space for more NBA Job Interview videos, featuring Bill Simmons, Jalen Rose, and some of the best young talents from the 2013 NBA draft class.

If there’s one player in the draft capable of sparking a fight between traditional scouts and the analytics gurus, it’s be Kelly Olynyk. The Gonzaga big man posted an astronomical 36.2 PER this year, leading the nation by a pretty healthy margin in one of the better metrics used to measure all-around production. Couple that with some positive intangibles, like a great work ethic and excellent feel for the game, and it’s hard to project anything but a bright future for the Canadian 7-footer.

But when watching Olynyk on film, some serious flaws begin to emerge. While blessed with good size, solid coordination, and a high skill level, Olynyk has short arms — he posted just a 6-foot-10 wingspan — and generally plays belows the rim, using great footwork to find ways to finish with his dominant right hand. Olynyk may also lack the strength to establish good position in the post, something that could drastically affect his ability to get off the same high-quality shots that led to his incredible True Shooting Percentage of 67.5 this past season. He’s just 22, so there is still plenty of time for Olynyk to safely add more power to his game with some work in the weight room, but there’s also a chance his potential as a post-up threat is a product of facing inferior competition.

If Olynyk is unable to score in the post, he will be forced to become strictly a pick-and-pop, high-post passing type who can stretch defenses from 18 feet to, potentially, the NBA 3-point line. Olynyk shot just 33.3 percent from beyond the arc during his three-year college career, but he did manage to shoot 46.9 percent on catch-and-shoot jumpers during his final season, according to Synergy Sports. With solid mechanics, Olynyk should be accurate enough to become another version of Channing Frye or Jon Leuer, two players with similar athleticism who have carved out a living as jump-shooting big men. Best case, Olynyk combines elite shooting with his excellent passing skills and high IQ and has a game reminiscent of former Chicago and Sacramento center Brad Miller.

But like Frye, Olynyk faces a positional crisis — he is likely too slow to guard power forwards, particularly when teams go small, and he lacks the strength to battle opposing centers. Despite that, Olynyk has enough tools to turn into a reliable backup and has an upside as an unorthodox, but effective, big man.

Stanley Cup Final: Can the Blackhawks Win in Six (Again)?