Stanley Cup Final: Can the Blackhawks Win in Six (Again)? 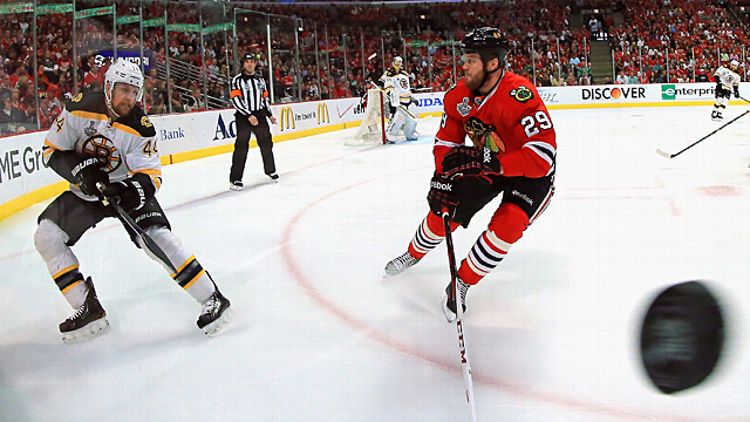 Patrick Kane was the first person to realize that the Chicago Blackhawks had won the Stanley Cup. He had put a low-angle shot on net during overtime of Game 6 in Philadelphia, and the puck had disappeared from view, but Kane knew it wasn’t stuck somewhere in Flyers goalie Michael Leighton’s pads. He had seen it go in the net, where it got lodged behind some webbing and out of sight. But he knew. He shed his bulky gloves and skated down the ice, his now-tiny-looking hands trembling high in celebration. (I can’t be the only one to think of SNL‘s “Lawrence Welk Show” every time I watch the clip.)

That was just over three years ago, in early June 2010. On Sunday, Kane was asked whether he or his Blackhawks team had envisioned returning to that moment: a Stanley Cup–clinching Game 6 on the road, just like the one they’re potentially facing tonight in Boston.

“You know, we were just kind of talking about that,” Kane admitted, one day after he scored twice in Chicago’s 3-1 Game 5 win over the Bruins to take a series lead. “I don’t know, I think the stars would have to be aligned right for it to happen like that again.”

From the NHL’s perspective, the stars have certainly been aligned right over the past two weeks, as we’ve been treated to one of the most entertaining (and most-watched) Stanley Cup finals in recent history. The Chicago Blackhawks and Boston Bruins have played five games in this year’s final, and three of them have gone into enough overtime to tack on the equivalent of a sixth game (and then some). We’ve seen low-scoring games that avoided being boring, and a high-scoring one that somehow didn’t feel particularly out of control or sloppy.

In all that time, amid the myriad ups and downs of playoff hockey — the juggled lines and the scoring droughts and the hot hands and the weak gloves and the stolen pucks and the momentum shifts and the arguments about whether momentum even exists — it’s been an almost unbelievably close series. In all that time, these two teams are separated by only one goal, with the Blackhawks having scored a total of 14 to the Bruins’ 13.

Exactly which goal you want to assign as the differentiator is up to you: It could be the most recent one, an empty-netter from Dave Bolland at the end of Game 5, or one of the overtime game winners off the stick (or shin pad!) of Brent Seabrook or Andrew Shaw; it could even be one of the goals that weren’t scored by the Bruins, like Chris Kelly’s miss on an open net in Game 4 or Kaspars Daugavins’s close call in Game 1 or any of the seemingly umpteen Boston shots that have clanked off the post and careened along, rather than over, the goal line.

The series has been so even that an argument could really be made for any of those goals, in much the same way an argument could be made for either team winning Game 6. Everything right down to the historical precedents is closely at odds. On the one hand, the Blackhawks broke a 2-2 series tie with a Game 5 win over the Flyers in 2010 and then ended it in six.

“We talked a little bit with all the guys yesterday,” said Chicago’s Michael Frolik, when asked about how to handle Game 6. “Those guys said just play the game, just do the same thing like you did before, and play with confidence and don’t be scared and just play the game.” (Asked whose pep talk was most memorable, he singled out “Kaner,” then added that he’d been speaking a lot with Marian Hossa, who is making his fourth final appearance in six seasons. “He speaks my language,” he said. “I tried to ask him [about things] a little bit. He was in the finals a few times, you know?”)

On the other hand, the Bruins won it all a year later by battling back from exactly the position they find themselves in right now: down 3-2 after a Game 5 loss, with a Game 6 at TD Garden. They won that one 5-2 and went on to win the Cup in Vancouver as fires blazed outside. More recently, they came back from what seemed like an impossible 4-1 deficit late in the third period in Game 7 of their first-round series against the Toronto Maple Leafs.

“You don’t come this far to lose, right?” asked Milan Lucic on Monday. “It would have been easy to quit two months ago in that Game 7 versus Toronto, but we dug deep to get through that game and there’s no reason why we can’t dig deep and find a little bit extra to get us through this one.”

Even the two biggest question marks going into Game 6 are practically identical. The health of both the Bruins’ and the Blackhawks’ most reliable two-way players — the two guys who finished first and second in the NHL’s Selke Trophy voting, separated by only 10 points — remains uncertain after each was unable to finish Game 5.

Boston’s Patrice Bergeron played just over six minutes on Saturday night before being sent to the bench and then the hospital with what has variously been reported as a ruptured spleen and definitely NOT a ruptured spleen. (An even more painful-sounding, albeit unsubstantiated, theory was also floated.) On Sunday, Boston coach Claude Julien helpfully described it as a “body injury” and declared Bergeron day-to-day; on Monday, he said that Bergeron would be there for warm-ups and that he was “confident” he’d wind up in the lineup.

Jonathan Toews, who did not see the ice in the third period of Game 5 on Saturday despite being captured by TV cameras imploring Chicago coach Joel Quenneville to “gimme just one shift,” also said Monday he was “ready to go” for Game 6. Information on Toews’s injury this weekend was murky, as is all injury news this time of year: He was crushed by Johnny Boychuk near the end of the second period and looked visibly googly-eyed after that, making concussion worries seem like the likely culprit. But he remained on the Blackhawks bench for the full third period, chattering endlessly to and at his teammates and being exposed to the full speed and noise and lights of the game.

“The coaches were confident we could win the game while making sure I wasn’t risking anything,” Toews said Monday. “I feel 100 percent.” Shaw said that “deep down,” he knew Toews would play: “I think anyone would,” he said. “A chance to win the Cup? Obviously there’s gotta be a lot of things wrong with you if you don’t want to play in that game.”

The NHL declined to discipline Boychuk for the hit, which was noteworthy less for the decision itself and more for the distinct lack of rancor it drew publicly among the Blackhawks. Even Patrick Sharp, who had spent a good deal of the third period of that bonkers Game 4 heatedly engaging with Boychuk, was diplomatic when asked his opinion on the ruling.

“[I] seemed to get messed up against Boychuk quite a bit in this series,” Sharp said. “He’s taken some runs at me. I can’t really complain how he’s hit me. He plays the game hard, he’s pretty honest. I think every series we’ve been a part of, things get a little bit more intense as they go along, a lot more trash-talking, physical play on both sides.”

Things may be getting more intense, but one thing that has been notable about the series, at least until now, has been its relative civility from the players. It’s not unusual for two teams to talk about how much respect they have for one another before the games actually begin — as both the Bruins and Blackhawks did going into the final — but nearly two weeks into the series, that “worthy adversary” vibe has remained remarkably unchanged. (Even Brad Marchand calling Shaw a “kitty cat” for scratching him seemed to be done in good humor — “that stuff happens in scrums,” he added. And Toews’s comments about “giving [Chara] a little bit too much respect” didn’t blow up into a huge controversy the way Roberto Luongo’s remarks about Tim Thomas’s playing style did in 2011.) It’s in strong contrast to how things went the last time the Bruins were in the final, when their matchup with the Canucks featured bitten fingers, four-game suspensions, faces used as punching bags, and public goalie-on-goalie sniping. The Bruins’ Shawn Thornton called the two finals “apples and oranges.”

“Vancouver’s its own team; it wasn’t just us,” he said. “Every team that played them said they couldn’t stand them with their antics that year, so a little bit different. You can’t really compare the two of them.”

It’s hard to compare the Bruins and the Blackhawks, too, not because they’re so far apart but because they’re so close — and also because, this being the final, every period of every game produces a sea change in sentiment. Chicago goalie Corey Crawford was a presumptive Conn Smythe front-runner until he allowed five glove-side goals in Game 4. (As he had earlier in the playoffs after giving up a tough goal against the Red Wings, Crawford rebounded nicely the next game.) Zdeno Chara was considered borderline unbeatable until he wasn’t.

Even though Bergeron and Toews are both likely to play, it’s hard to know how the stars will align for the stars and their lines. The Bruins struggled with Kane and Toews on the same unit in Game 5, with Julien ultimately breaking up the usual defensive pairing of Chara and Dennis Seidenberg. If the Blackhawks win tonight, they’ll have two Cups within four years; lose and they’ll be asked right up until puck drop on Wednesday night whether they’re worried they weren’t able to “close things out.” (Just ask 2012’s Darryl Sutter.) And so it goes.

Given how tight the series has been, a seventh game feels only right; it’s the regulation version of going into overtime. But it’s also probable that at some point late in the game the Stanley Cup will be in the building, waiting in the wings. Phil Pritchard and Craig Campbell, the white-gloved keepers of the chalice, said last season that they “usually watch the first period of a potential Cup-clinching game at a nearby hotel before making their way to the arena.” If it’s a blowout by the Bruins, like Game 6 was in 2011, they’ll never actually bring it in.

“We’ve been here before,” said Tyler Seguin. “We’re excited to play here on our home ice and make sure the Cup isn’t seen out there.”

So far, though, there’s been nothing lopsided about this series. Both teams have kept their enemies much, much closer than that.

Your Semiannual Reminder That Dirk Nowitzki Is a Self-Aware Genius