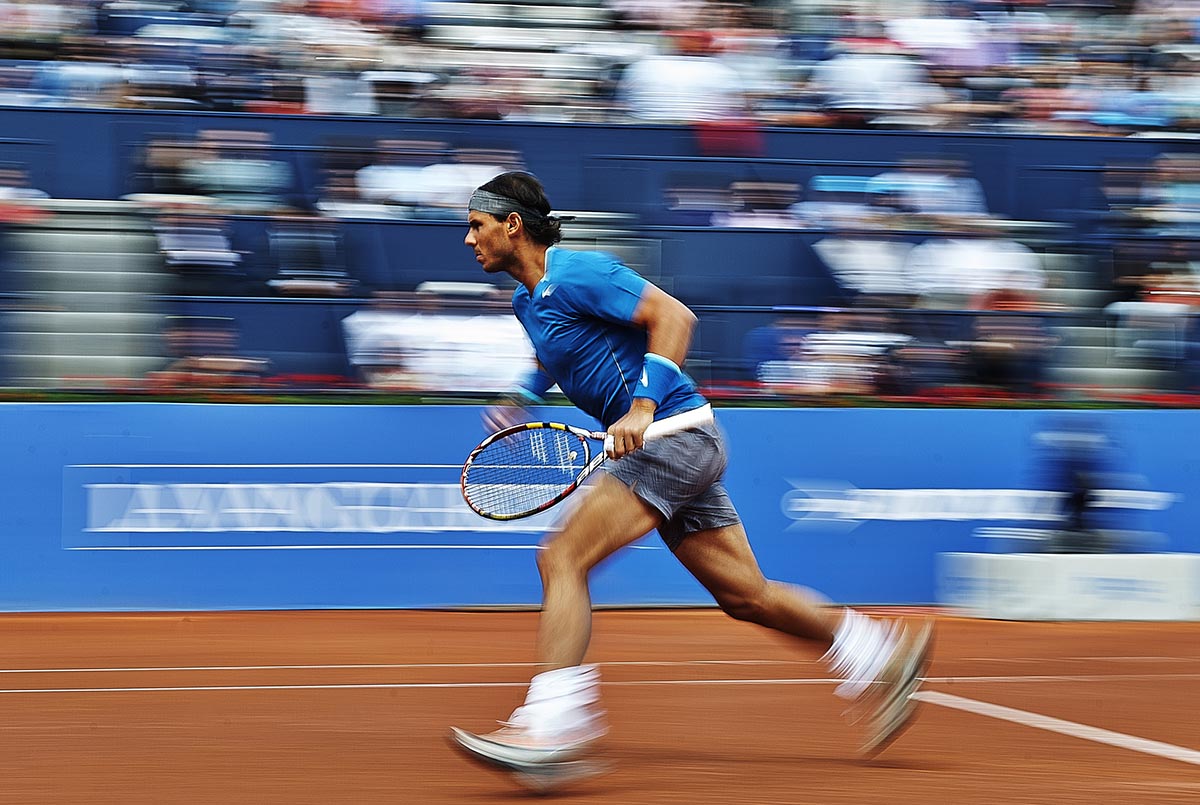 As a rule, if you’re a top tennis player, you don’t have a home. What you have is a residence, a training base, an empty house. You reside in Bottmingen and practice in Dubai. There is a place in Miami, a pied-à-terre in Paris, or a mailbox in Flagstaff. You list your address as Monte Carlo. For all but a few weeks a year, you’re dropping your bags at hotels in Rome, New York, Madrid, London, Melbourne, Charleston, Shanghai, Indian Wells, Auckland, Cincinnati, Brisbane, Toronto. Only occasionally can you return to Dunblane, to Minsk, to Belgrade, to the place you were born. It is so rare to find yourself there that, when it happens, it might make you weep.

For Rafael Nadal, it’s different. Nadal was born in Mallorca and still lives in Mallorca. When he travels, he takes Mallorca with him. He has Uncle Toni in his box. He has his habits, his tics and routines — every point, every court, everywhere. He has figured out how to play on Centre Court at the All England Lawn Tennis and Croquet Club as if the grass were crushed Spanish brick. He digs into long rallies on the quick concrete of Melbourne and Queens as if it were dirt. He steps onto clay courts as if into his own backyard. He plays every single point, in every single match, with the intensity of a man fending off invaders of his ancestral land.

When Nadal plays in Barcelona, he can’t sleep in his own bed, but he’s close. A flight from Mallorca takes 40 minutes. When he stands by the sea, it is the same sea, and the same strength of the sun, the smell of the salt air, the height of the net, the length of the baseline, the familiar ochre color of the clay. That court is home. Coming into the quarterfinals against another Spaniard, Nicolas Almagro, on Friday, Nadal had won 41 matches in a row in Barcelona. He had won eight titles. He had not lost a match in Barcelona since his first appearance, in 2003, when he was 16. He had not dropped a single set in Barcelona since 2008.

But lately, not all has been well in the Land of Nadal. He has been open about how losing to Stan Wawrinka in the finals of the Australian Open shook him — and not only the loss, but also the way it happened.

Injured, he had known he could play but that he could not win. He could not fight, which meant he could not be himself. “It was tough being there for 90 minutes knowing that you will not win. But not winning was not the worst thing. The worst thing was knowing I could not compete,” he said. He called it one of the “toughest moments” of his career.

Nadal has an uncanny ability to reset — to take his time, to start the moment anew. He plays under pressure as well as anyone, and one bad shot never seems to breed another. But he had a harder time shaking his disappointment over the loss to Wawrinka. “I started the season OK except for some lack of confidence and competitiveness in important moments of certain matches,” he recently said — which is a little like a normal person saying, “I’m doing OK except for the pesky stroke that paralyzed my right side.”

He is 25-5 this year. He needs only two more losses to match his whole total from 2013. One came in Indian Wells to Alexandr Dolgopolov — which, all right. Dolgopolov is a tremendously talented player with an unusual game. In the finals at Miami, Nadal lost to Novak Djokovic; no shame there. It’s what’s happening lately that’s so troublesome. He has been losing on clay. To Spaniards.

Coming into Monte Carlo three weeks ago, Nadal had won 66 of his last 67 matches against his countrymen. They are clay-court specialists and he is the clay-court king, and so he is their ruler. In April, he has lost to Spaniards twice. In Monte Carlo, he lost to David Ferrer, 7-6 (1), 6-4. David Ferrer, whom Nadal had beaten 17 times in a row. Up until that point, Ferrer more or less existed to protect Rafa’s path to a title. With his athleticism and tenacity, Ferrer would reduce better shot-makers into fine powder and then graciously offer himself up to be pulverized by his superior compatriot. Ferrer is the no. 5 player in the world, but he sometimes played as if he did not belong on the same court as Rafa. In Monte Carlo, though, Nadal drooped and stumbled, hit 44 errors, and played his worst when he normally plays best. Most un-Rafa-like, there were points in the first-set tiebreak where he seemed to give up. He watched balls pass him. He conceded space on the court.

Nicolas Almagro’s 2-6, 7-6 (5), 6-4 win over Nadal was even stranger than Ferrer’s victory. Against Ferrer, you might chalk up Nadal’s lassitude to a horrible day, a freak occurrence, bad feng shui. But for most of the first two sets against Almagro, Nadal was actually playing well — like only Nadal can play. His feet were sure and fast, his backhand compact and controlled, his approach almost unusually aggressive. Again and again, he was constructing points, hitting spots, and moving into the court to take and put away the short ball.

The crucial lapses happened in the second-set tiebreak and again in the third. At times, he wandered inside the baseline and scooped defensive shots from the back of his heels. He hit four double faults, including three in the decisive third set. He won only one point on his second serve in the whole third set. He sent what were (for him) routine passing shots way long.

Still, Nadal should have won this match. He played a better game for most of the time. He had 18 break points! But Nadal, who is normally among the very best at break-point conversion, won only five of them, and was unable to take advantage of the moments when Almagro seemed about to tighten, accept the inevitable, and defer to the king. Nadal won eight more points than Almagro in the match — 110 to 102. But in tennis, a point isn’t just a point. At key moments in the second-set tiebreak and in the third sets, Nadal was the bewildered one. On match point, Almagro did what Nadal so often does and, pulling Nadal wide, and took advantage of — this is strange to say — Nadal’s empty court.

Almagro’s confidence had grown as Rafa wavered. The 20th-ranked player plays with the brashness of a little punk. He hit forehand winners — and errors — with watch this flair. He started to take advantage of Nadal’s sharp angles to create angles of his own. He played a solid defensive game, picked his chances to deftly move around his one-handed backhand, and used good power to shoot his forehands through the court. Most unnervingly, when Almagro seemed close to cracking, unable to sustain such high-stakes hitting at big moments, Nadal was the one who blinked. With Almagro serving for the match, Nadal quickly earned two break points. On the second of them, he lined up the perfect forehand. It clipped the top of the net, spun high in the air, and fell back on his own side.

If that let cord had fallen onto Almagro’s side, or if a forehand from Almagro hadn’t slipped off the back of the baseline during the tiebreak, making it impossible for Nadal to handle, or if half a dozen other close shots had gone the other way, it’s tempting to think the result of the match would have been different. Having gotten back on serve in the third, Nadal might have found a way to dig the match out, and the win would be only one more example of his gladiatorial prowess, his will. He finds, we’d say, a way.

But luck in tennis is funny. Is it really luck? Almagro had benefited when his forehand slipped off the back of the baseline during the tiebreak, but Nadal had been in control of that point and had chosen to target Almagro’s stronger forehand instead of his one-handed backhand. He had given Almagro the chance. He may have had bad luck with the net cord, but he didn’t need to cut it so close; that should have been an easy put-away shot.

Last year, Nadal beat Almagro in the final in Barcelona. Facing set point, Almagro hit a hard shot that clipped the top of the net and soared into the air. Nadal glided in and easily hit a winner to take the first set. Good fortune smiles on champions.

Nadal’s career record on clay is 302-23. Two of those losses have come in the past two weeks. Matches are decided by a few millimeters here and there, but the millimeters that matter usually turn out to be Nadal’s. He twists defensive shots into curling winners. He wins the key points. It’s not coincidence; it’s not luck. What made the gap between the group of Nadal, Federer, Djokovic, and Murray and the rest of the field so massive was that even when the margins were tiny, when the results were decided by a couple of break points, those points went their way. It is perhaps the most extraordinary and understated fact of their dominance.

Right now, a few of those key points are starting to go the other way. Maybe it means nothing. Nadal is 59-1 at Roland Garros. He has won the French Open eight times. It’s as foolish to bet against him now as it was three weeks ago. But if nothing else, the recent results are disorienting. So much of tennis is won by the mind. Nadal is still the best clay-court player in the world. But he came home and, for a few moments that mattered, found that the landscape had changed.

A Tale of Three Game-Winning Shots