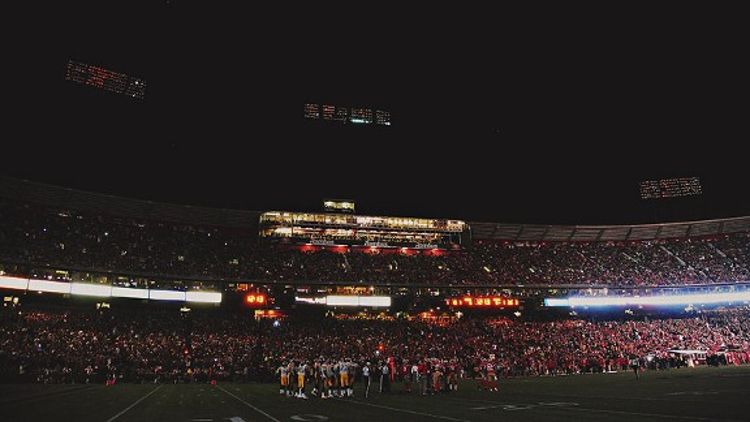 In the words of Shane Ryan, if you were out “living a life of leisure” last night, you missed a blackout during Monday Night Football. Apparently, San Francisco is in the business of writing bad checks or something, because on two separate occasions, the power went out in the entire stadium. Everything was fine, seeing as it wasn’t a Raiders game, but people didn’t really know how to react. There was a great deal of speculation, some finger-pointing, and overall confusion.

Now is a good time to point out that when I say “people” I mean “everyone not named Vernon Davis.” The 49ers tight end has long been in his own category, cleverly titled “Vernon Davis.” While “people” were all over the place with their emotions, “Vernon Davis” simply told it like it was.

I don’t know the question that prompted Davis’ quote, but I’d like to imagine it was something like this: “Vernon, has there ever been a time in your life when you were in a stadium and suddenly there was a blackout?”

“Never in my life have I been a part of a blackout in a stadium.”

So real. Quotes like this remind us that professional athletes are just like you and me. One time, I was on a road trip and stopped at an Arby’s to get a Beef ‘n Cheddar. I was shocked to see a sign on the front door. Assuming my facial expression was a mix of confusion and joy, my friend asked me if everything was OK. My Vernon-esque response:

“Never in my life have I been inside of an Arby’s with free wireless.”

I know the instinct for most machismo-dripping American footballers is to act like an expert in all situations, but as we learned from Vernon, sometimes you just have to admit when you’re a first-timer. If Vernon is anything like me, the second line of that quote would have been: “Also, I’m a little scared of the dark, so can you hold my hand until this is all over?” I’m not saying that’s where he was going with it, but he definitely could have been. Easily.

Thank you, Vernon, for your vulnerability, your strength, and your courage. Mamas boys like me need a hero, and I think you’re the perfect person to fill Donovan McNabb’s Chunky Soup-filled shoes.

Previously by Rembert Browne:
Trailers of the Week
Things We Found on eBay
Rembert Explains the ’80s