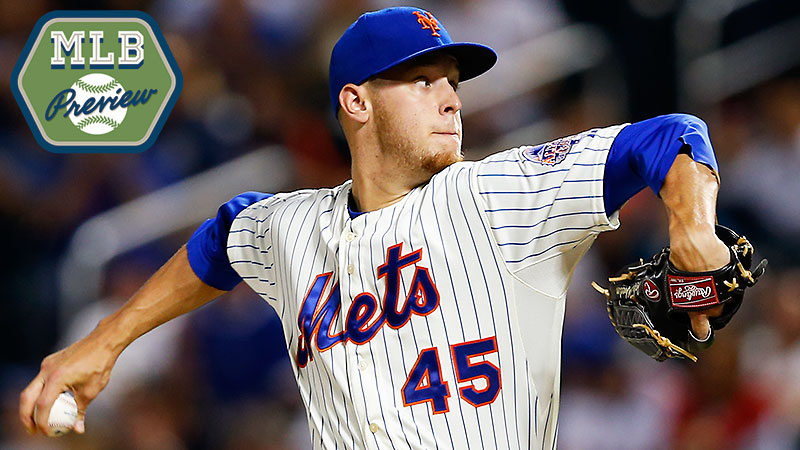 This should be a 391-Day Warning. Because in that many days, I can expect to see the kind of hard-throwing trio most Mets fans have spent decades pining for, but never quite getting. The pitchers in question are Matt Harvey, Noah Syndergaard, and Zack Wheeler. They are powerful and intriguing and, in the parlance of rebuilding front offices, the future. But they will not be joined together in 26 days.

Harvey, who is a special person, was taken from us late last year by a Tommy John troll, stealing one full season of mid-twenties, pre-arbitration eligibility from one of the league’s most exciting and bullheaded pitchers. Syndergaard, or “Thor,” as the 6-foot-6, 240-pound Viking hurler has come to be known, came to New York from Toronto in last offseason’s R.A. Dickey deal. Syndergaard is redwood big, nasty as all get-out, and throws with the might of Mjölnir; the hammer puns on the New York Post back page are going to be so special. With three out pitches, including a heavy, teeming fastball, Thor projects as a prototype ace. (Boy, that Dickey trade, which also netted current Mets starting catcher Travis d’Arnaud, sure was swell.) The third Hydra head belongs to Wheeler, another pitcher whom general manager Sandy Alderson reeled in for an aging veteran nearing the end of a deal. (In this case, by sending Carlos Beltran to the Giants in 2011.)

It's Halloween! You know what that means? Max out on squats! pic.twitter.com/OUORUntwaZ

Wheeler delivered an impressively steady rookie season in 2013, going 7-5 with a 3.42 ERA and nearly eight strikeouts per nine innings, but he seemed unrefined, tentative, and wearied by September. Now, the sophomore leap hype cycle has begun. “What we’ve seen so far is, this guy has a good feel for pitching. I mean, this guy can pitch at 93, 94, yet he knows he can reach back for some extra if he needs it,” Mets manager Terry Collins said after Wheeler’s first spring start on Tuesday, shortly before all but naming the 23-year-old the Opening Day starter. Oh yeah, these men are young. Harvey turns 25 later this month. Thor is 21.

This matters greatly in Flushing, where ownership and the punditocracy alike have promoted the feeling that no Mets team will win a World Series without an elite staff. Trapped in spacious Citi Field and haunted by decades of offensive ineptitude — 31-year-old David Wright is already the best offensive player in team history — hope springs liminal. Syndergaard likely won’t be in the majors before June, and Harvey won’t be throwing magma-rocks until September at the earliest. So this is Wheeler’s show for now.

But next year, oh next year. There will be some symmetry about the Harvey-Wheeler-Syndergaard triumvirate next season: It will be exactly 20 years since the arrival of Generation K, that lauded and then lamented power trio of Mets prospects. Those three — Pulsipher, Wilson, and Isringhausen — are a brand on the back shoulder of every fan in his or her twenties and thirties, who’s too young to remember ’86, and too traumatized by ’06 to hope again. There’s reason for that lost faith. The Mets are tied with the lowly Astros for the most consecutive losing MLB seasons, with five. The team has also come under some fire from the player’s union this week for spending only $87 million on payroll, which projects as the seventh-lowest total in the league even though the Mets play in the richest city in Neil deGrasse Tyson’s universe. This offseason, the Mets did add buy-low veteran outfield Chris Young, buy-high veteran outfielder Curtis Granderson, and buy-a-buffet veteran starter Bartolo Colon. (Also, Daisuke Matsuzaka, which, well, buy an umbrella.)

But I accept this strange bout of fiscal turpitude. Since grabbing the reins of this ship wrecked by a Madoff-shaped barnacle, Alderson has been patient in his actions and wry in his commentary. He has made a handful of deals that seem too good to be happening to the Mets. He has re-signed the team’s linchpin and leader to a contract that will keep Wright home forever, and ever. He has even made grand proclamations that may bolster this ragtag crew. There is a reason Bud Selig entrusted Alderson as VP of baseball operations for years, and why Selig sent him to investigate corruption in the Dominican Republic before Alderson came to assuage the emotional terror in Queens. Alderson takes his time and earns trust. He is forthright and wise. And if you don’t believe in him or his methods, he has three big men with strong arms who would like to show you something in 391 days.