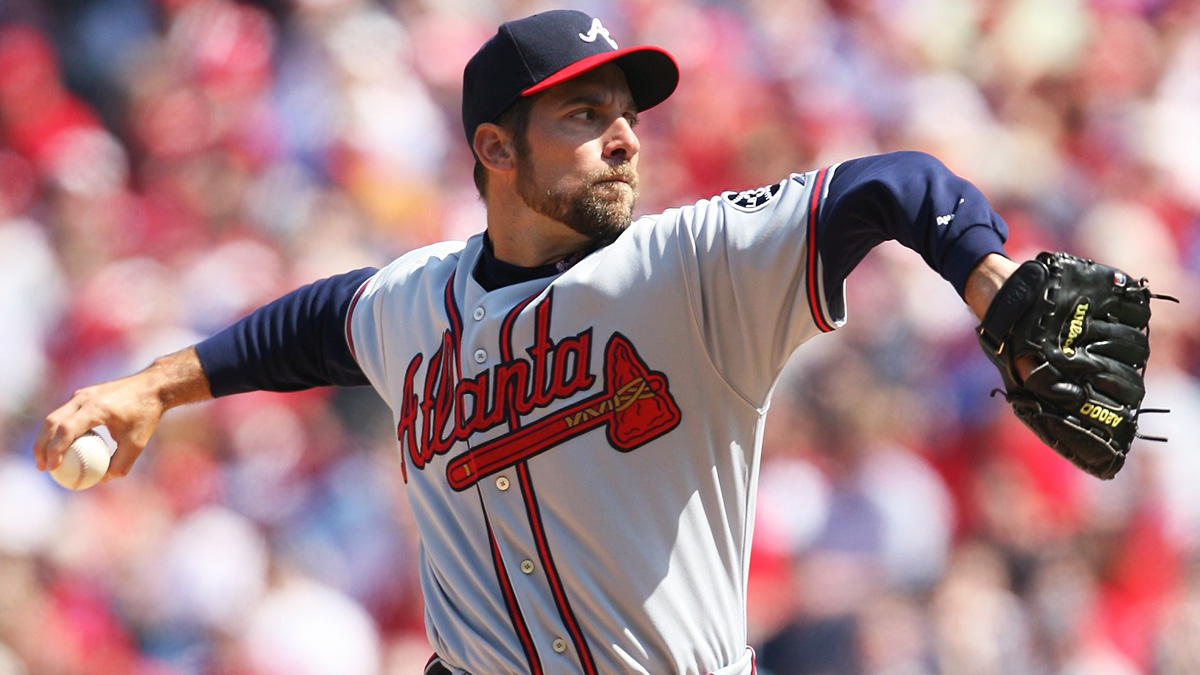 This should be a difficult time to debut on baseball’s Hall of Fame ballot. Because the Hall’s induction rate hasn’t kept pace with the growth of the player pool, the slate is stuffed: Superstars dogged by steroid suspicions vie for votes with well-respected recent retirees and fixtures with strong pockets of support. Even writers who mark the maximum 10 names — which many aren’t willing to do — can’t come close to including every statistically qualified candidate.

All of which makes John Smoltz’s splashy polling performance surprising. Smoltz, the longtime Atlanta Brave whose career concluded in 2009, is the third-best pitcher appearing on the ballot for the first time this winter, behind inner-circle immortals Pedro Martinez and Randy Johnson. WAR-wise, he also trails two pitchers making repeat appearances, not counting the scandal-tainted Roger Clemens: Both Mike Mussina and Curt Schilling, who are in their second and third years of eligibility, respectively, have superior regular-season stats. Schilling, who came close to gaining 40 percent of voter support in 2012, dipped below 30 percent last December; Mussina barely topped 20 percent in his inaugural attempt at induction in 2013. Until completed ballots began to trickle onto the Internet, it seemed reasonable to assume that Smoltz would also spend some time in Cooperstown purgatory.

Instead, Smoltz now looks like a lock for first-ballot success. With the voting deadline looming tomorrow and the verdict arriving a week from today, 99 ballots have been disclosed and collected — about 17 percent of the pool, judging by last year’s electorate. Johnson and Martinez are enjoying near-universal support: Every voter but one has swiped right on Johnson, and only two have passed on Pedro.1 Smoltz, who’s polling at 88.9 percent, is also in line for election, ranking ahead of Craig Biggio (who fell two votes short of a shiny new plaque in 2013) and Mike Piazza, the only other players polling above the 75 percent election threshold.

Meanwhile, Schilling and Mussina must be wondering whether they could coat themselves in Smoltz’s scent and deceive the opposition, like Glenn and Rick wearing walker guts. The early returns suggest that the duo will make significant gains, but they’re still far from the goal — and that’s before adjusting for the sizable gap between some candidates’ preliminary and final polling figures, a byproduct of the demographic differences between the full electorate and the writers who reveal their selections early (and who skew younger and more amenable to modern metrics). Last year’s BBTF tracker, for instance, overstated the complete pool’s support for Schilling and Mussina by 7.3 and 6.1 percentage points, respectively. Smoltz might be subject to a similar effect, but his exit-poll numbers would have to be hugely inflated for his final percentage to sink below 75.

But does Smoltz’s polling supremacy over Schilling and Mussina make sense? To find out, we can use Sports Illustrated author Jay Jaffe’s JAWS (Jaffe WAR Score) system, which allows us to assess each candidate’s Hall of Fame worthiness by comparing him to the players at his position who are already in. The table below shows how Smoltz stacks up against Schilling, Mussina, and the average enshrined starter in career WAR, “peak WAR” (the sum of his best seven seasons), and JAWS, an average of the two.

Smoltz falls just short of the career WAR standard for Cooperstown starters and well below par for peak value, posting a below-average JAWS. In contrast, Schilling and Mussina miss in the “peak” category but clear the “career” bar and JAWS baseline. Eleven players on the ballot have a higher JAWS than Smoltz; 15 compare more favorably to the JAWS average at their respective positions.

Of course, Smoltz wasn’t exclusively a starter: He pitched out of the bullpen and racked up saves for three-plus seasons in his mid-thirties. Tweak the JAWS average accordingly, as Jaffe has attempted to do, and Smoltz surpasses the hybrid, starter/reliever standard — and that’s before factoring in his impressive postseason performance. In other words, there’s no need to administer a sabermetric smackdown of the sort that fringy former candidates Jack Morris, Jim Rice, and Andre Dawson regularly received from Internet analysts: If I had a vote2 and the freedom to list more than 10 players, Smoltz would be on my ballot.

Still, there’s something strange here: Twenty-two of 85 ballots linked from Thibs’s detailed vote tracker listed Smoltz but neither Schilling nor Mussina, while only four listed Schilling and Mussina but not Smoltz. The discrepancy in support demands an explanation — or several explanations, since one won’t suffice.

Maybe Smoltz is executing the equivalent of a Cooperstown chat and cut, using his association with players in a more privileged position to skip the line. Rotation mates Greg Maddux, Tom Glavine, and Smoltz go together like a much more talented Tinker, Evers, and Chance. Just as Joe Tinker’s election was assured when Frank Chance and Johnny Evers were elected, Smoltz’s 2014 fate might have been sealed when Maddux and Glavine got in. While we don’t have a systematic study of a Cooperstown coattail effect, as we do in politics or even the MLB draft, there is anecdotal evidence that ties to other great players or teams can give a bubble candidate a boost, even without Veterans Committee cronyism. (Tony Perez, for one, probably benefited from the aura of the Big Red Machine.) And the exposure that Smoltz received from TBS national broadcasts and frequent playoff appearances can’t have hurt (not that Schilling and Mussina were ever far from the spotlight).

Smoltz threw 209 mostly superb postseason innings (2.67 ERA), the majority of them coming in the heart of a high-offense era. He was also the other starter in the game that almost single-handedly made Morris a serious Cooperstown contender. However, Schilling also belongs in the postseason pantheon, and Mussina has a strong playoff record full of memorable moments. In addition, recent research by Bill James identified Mussina as one of history’s best regular-season big-game pitchers.

Starters and closers have the same basic job — throw baseballs, accumulate outs — but the details are different enough that they’re regarded as separate occupations. Smoltz served with distinction in both roles, which gives him a veneer of versatility.

Smoltz made more All-Star Games than either Schilling or Mussina, and he’s the only one of the three with a Cy Young Award. He pitched in 14 postseasons to Mussina’s nine and Schilling’s five (though he won only one World Series to Schilling’s three). James’s traditional-stat-based indicators of how Hall of Fame candidates will do — compared to JAWS, which reveals how they should do — make the support for Smoltz seem less surprising.

It wouldn’t matter in a perfect world — and it might not matter in ours — but Smoltz would probably appear on more voters’ lists of “Hall candidates I hope to have a beer with” than the outspoken Schilling and the private, cerebral, and sometimes acerbic Mussina.

The simplest way to figure out which factor has helped Smoltz the most is to examine his backers’ stated reasons for supporting him. Of the 78 “yes” votes for Smoltz linked from Thibs’s tracker, only 18 include an explanation that goes beyond “he’s a no-brainer.” While some writers might be unaware of or unwilling to reveal the biases governing their voting, their explanations are still telling.

Only three Smoltz supporters mentioned completing the Atlanta trifecta. Seven cited his postseason success. Ten included some nonspecific nod to his skill. But 14 praised Smoltz’s experience in multiple roles, with three comparing him favorably to Dennis Eckersley, a hybrid Hall of Famer who falls closer to the “reliever” end of the spectrum.

The portrayal of Smoltz as a Swiss Army ace relies on shaky logic: Every elite starter has the ability to be a dominant closer, and Smoltz shouldn’t get extra credit for the fragility that temporarily forced his team to use him in a less valuable role.3 After all, Mussina wouldn’t be a better candidate if he’d taken a sabbatical from starting to pitch out of the bullpen for Baltimore.

While Schilling, Mussina, and Smoltz were all great starters, though, Smoltz’s story has a hook: As many voters mentioned, he did something unprecedented, becoming the first pitcher to win 200 games and save 150 more. And while he didn’t come close to the magic milestone of 300 wins, 200 plus 150 equals 350, which is greater than 300. That’s the kind of math that even the most WAR-averse voters don’t mind.

This post has been updated to remove an erroneous reference to Mike Mussina winning a World Series.