MLB Awards Week Isn’t Over Until We Say It’s Over, So Here Are Five Fake Honors 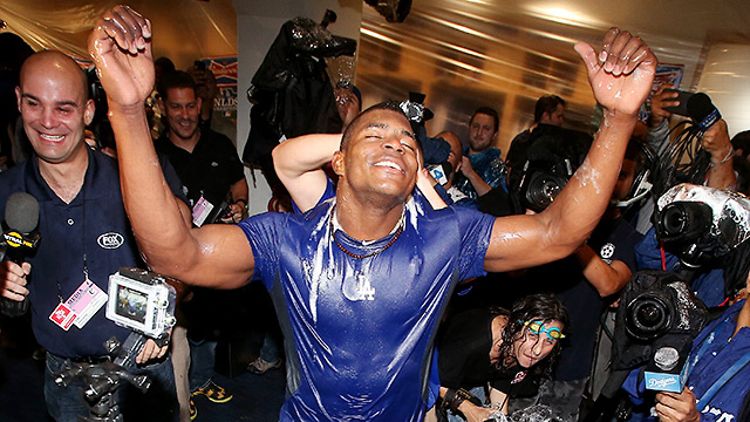 Hockey gets a lot of things right, but I’m particularly fond of its awards. While the NHL has the usual offerings — MVP, rookie of the year, coach of the year — the league separates itself with some really creative honors. Plus, all the awards have cool names, like the Art Ross Trophy!

Baseball needs more of this. So before the post–MLB awards week haze sets in and we all try to forget that we’ve been arguing about Mike Trout and Miguel Cabrera for what feels like the last 65 years, let’s create some hockey-style awards for America’s favorite pastime.

Description: The player who most gives 'em something to talk about.

2013 winner: Alex Rodriguez. Even though A-Rod only played in 44 games, nobody got the ol’ debate machine going this season quite like he did. Since at this point Yankees fans like criticizing Rodriguez more than they actually like baseball, we should probably just etch A-Rod’s name into the trophy (a guitar with a bat for the neck) for each of the past 10 seasons. Biogenesis, a drug scandal that feels like it was ripped from the pages of a bad John Grisham novel, certainly hasn’t helped A-Rod. But while this year produced a particularly potent field of controversial ballplayers, if controversy were like hitting, A-Rod would be Ty Cobb.

Runner-up: Yasiel Puig. The fact that Puig wasn’t baseball’s most controversial player in 2013 really speaks volumes about A-Rod. Before Puig, I can’t remember the last time the sport saw such a powerful magnet for trolling. Puig’s time to hoist The Bonnie will undoubtedly come.

Description: The player whose actions on and off the field spark the most surprises. When it comes to this player, you’ll believe in anything.

2013 winner: Puig. All systems tend toward disorder, particularly when those systems involve Puig. He plays the game in a sort of berserker state — with great skill and aggressiveness, but also kind of perpetually like this:

Even though Puig didn’t win (and really, didn’t deserve) MLB’s Rookie of the Year award, he was clearly baseball’s breakout star in 2013.

Runner-up: Brian Wilson. After Tommy John surgery ended Wilson’s 2012 season, I thought we were rid of Wilson and his idiotic beard and his attention-seeking behavior. I was wrong. After glomming on with the Dodgers, Wilson pitched as well as he ever has. He also acted like as big of a tool as he ever has, coupling with Puig to make the Dodgers the most unpredictable team in the league.

Runner-up: Jose Iglesias. Emerging in 2013 was rough timing for Iglesias; it seems unfair he was merely the game’s second-best defensive shortstop and fourth-most-compelling Cuban defector. He’s going to be the Clyde Drexler to Simmons’s Michael Jordan for the next decade.

Description: The player most likely to get you to make this noise.

2013 winner: Yu Darvish. This is a recycled joke, and I’m sorry about that, but there’s no way to describe Darvish’s slider other than by saying it’ll make you make noises. I really want this award to become a thing, because we need to stop letting people talk about baseball like it’s boring when players like Darvish exist.

Runner-up: Billy Hamilton. Hamilton only batted 22 times this season, but he still managed to make a remarkable impact. Dusty Baker used him as a pinch runner in critical spots in September, putting Hamilton in situation after situation in which he could steal a base with the game on the line. Everyone knew Hamilton was going to steal, and there was still nothing the catcher could do about it. In terms of tension and get-out-of-your-seat excitement, Hamilton’s impact was tough to match in regular-season baseball. I really hope the novelty never wears off.

Description: The baseball figure who suffers through the most pointless, boring, soul-crushing, Sisyphean, unpleasant season and somehow emerges in one piece.

2013 winner: Bo Porter. The Houston Astros are a science experiment right now, having entered the most aggressive rebuild in the history of the sport. Not everything is bleak: Looking at the talent in the front office and the minor leagues, Houston’s future is so bright that sunglasses won’t do it; you need a gold-foil bodysuit to deal with the optimism.

But Porter isn’t in the minor leagues or the front office. He’s in the stink. He’s coaching a team whose best player, Jose Altuve, is closer in stature to Nikita Khrushchev than to a real athlete. The Astros’ signature moment of 2013 was Jonathan Villar’s face ending up in Brandon Phillips’s ass. So while we can all sit from afar and laugh and marvel and applaud the Astros for going all-in on a rebuilding plan and not hedging their bets, we can’t really imagine what it was like to sit in the Houston dugout for 162 games this year.

The really sobering part is that a year before the Butt Slide, Porter was in baseball paradise. As the third-base coach for the Washington Nationals, he worked for Davey Johnson, one of the greatest managers in the history of the game. Porter waved such players as Jayson Werth, Bryce Harper, and Ryan Zimmerman around the bases and had a front-row seat to watch some of the best young pitchers in the game. The Nationals tasted victory 98 times in 2012, more than any other team in the game.

Then the Astros hired Porter, who’s still only 41, to mentor a roster of children and cast-offs who are keeping the seats warm for Carlos Correa and Mark Appel and others. Houston enjoyed some fun moments in 2013, but no team flat-out embarrassed itself more this year than the Astros did. And it’s going to get worse before it gets better.

So for his perseverance and stiff upper lip, for keeping the faith when surrender and boredom seem like the sane man’s only options, we need to recognize Porter.

Runner-up: Cliff Lee. The Phillies were 22 games better than the Astros this year, but their outlook is even worse than Houston’s, because at least the Astros have plenty of minor league talent and front office intelligence. The Phillies have neither.

Lee has been one of the best pitchers in baseball for a while, and he signed a long-term deal to return to Philadelphia in search of the World Series title that had barely eluded him. And while Lee put up one of the best seasons of his career at age 34, the Phillies had the kind of season you’d expect a team to have when it goes out of its way to acquire Delmon Young. I’m a Phillies fan, and after September 1, I watched maybe four innings’ worth of my favorite team, because I had less painful things to do, like slamming my ear in a door over and over.

My heart goes out to Lee, who chased a title and wound up casting his lot with a team that was too old to leave a large window open, and led by a general manager who wasn’t so much rearranging deck chairs on the Titanic as he was drilling holes in the lifeboats.